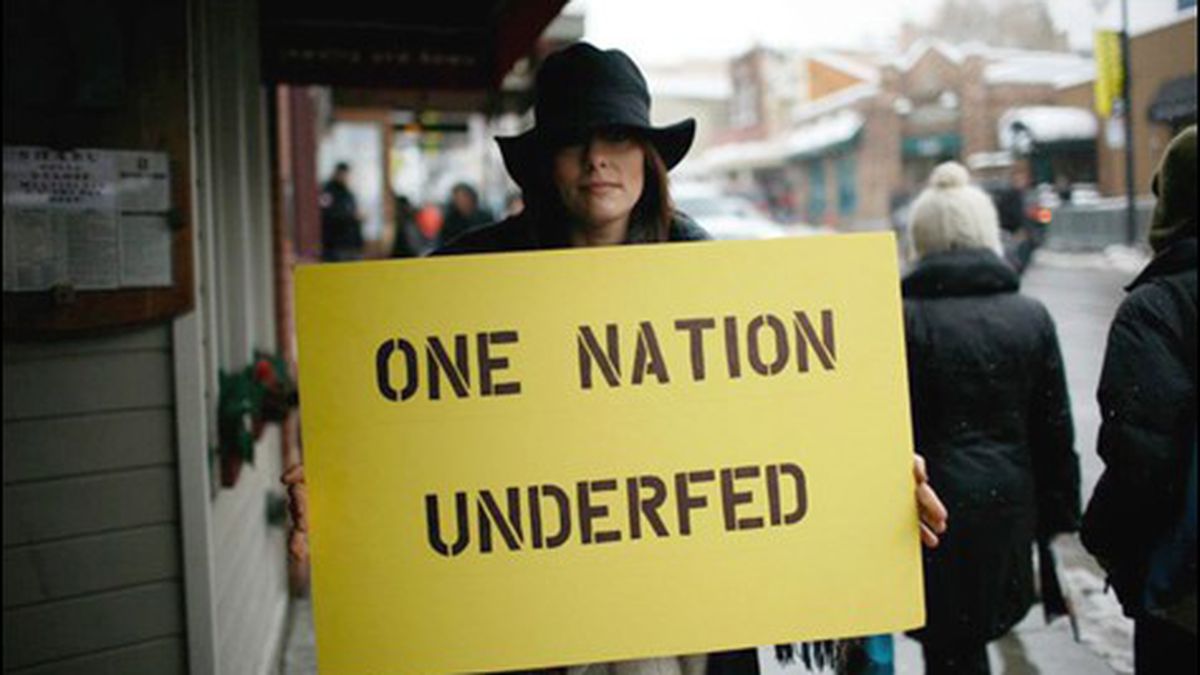 A Place at the Table

It’s one of our saddest little secrets. According to the producers of A Place at the Table, 49 million Americans exist without enough to eat in a nation with more than enough food.

The prevalent notion of a country of fatties waddling through shopping malls with corn dogs and Pop-Tarts in their hands is deceptive. The poorest Americans may not be stick-thin but they’re probably undernourished just the same, overdoing it on cheap, empty calories — remember Food, Inc.;Fast Food Nation; Super Size Me, etc. — while struggling with the accompanying health issues, like diabetes. Kristi Jacobson and Lori Silverbush’s blistering “outrage documentary” is angry, incisive, and unafraid to get down to root causes. The roots of American hunger aren’t pretty, but they need to be talked about.

According to the producers, “food insecurity” is defined as the condition of not knowing where your next meal is coming from. The US ranks worst for FI on the IMF’s list of Advanced Countries. To drive home the point, the filmmakers visit three low-income families. Rosie is a small-town Colorado fifth grader, living with her single mom in her grandparents’ home, who says she can’t concentrate at school because she’s hungry. Barbie, a Philadelphia single mother looking for work and living on food stamps, has a son with developmental problems from malnutrition. Mississippi second-grader Tremonica, surprisingly, may be the lucky one of the film’s subjects — her community is involved with a children’s health project that’s trying to bring fresh, affordable food to kids in the state with the highest rates of both FI and obesity.

The celebrity volunteers (actor Jeff Bridges, chef Tom Colicchio) and food activists (Mariana Chilton, et al.) in the film are not shy about assigning blame for the situation. The USDA supports mega-farm corporations and legislative agriculture committees kill all food reform, essentially taking money away from people who can’t defend themselves. Author Raj Patel notes that: “Welfare for the poor is scorned but welfare for corporations is heartily endorsed.”

US Representative Jim McGovern (D-Mass.), co-chair of the Congressional Hunger Center, tried to live on food stamps (average benefit: $3 per day) and discovered what many already knew — that processed foods are cheap, and fresh fruits and vegetables are prohibitively expensive. Says author Marion Nestle, that’s due to what we subsidize and what we don’t. A Pentagon official, assessing the pool of potential military personnel, is characteristically blunt in his analysis of the American diet: too much fat, sugar, and sodium, and not enough fruits and veggies.

What’s to be done? Start by analyzing the money spent on lobbying. Agri-business accounted for more than $121 million in political “donations” in 2010, second only to the oil and gas industry. As always, follow the money — or in this case the lack of. “The reason people are going hungry,” declares Patel, author of Stuffed and Starved and The Value of Nothing, “is not a shortage of food, but poverty. Why are people poor?” A hard question for hard times. The “food deserts” in the US — rural areas, inner cities, poor neighborhoods in general — are that way because they cannot pay the price of a healthy diet. To earn a living wage is all-important. So is teaching children about healthy food. So is applying grassroots pressure on politicians. Also the work of NGOs such as Bread for the World, Chilton’s Witness to Hunger, and ordinary food banks. According to Bridges, “It’s about patriotism.” We need better food to help our country.

The expressions on the faces of Rosie (hopeful but strained at a young age) and her mother Trish, who works at a cafe for $60 a week, are heartbreaking in the extreme. Wednesday evenings they join their neighbors for free dinner at church. Meanwhile in Philly, Barbie finally lands a job, which means that with the added income she no longer qualifies for subsidized childcare or food stamps. So she’s back to the same spot. Down in Mississippi, however, food organizer and cook Ree Harris is busy introducing vegetables to enthusiastic school kids, who find they like the taste. On the music track, T-Bone Burnett and the Civil Wars warble plaintively. And Rosie’s mom enunciates the original American dream: “I want my kids to have a better life than I do.” Food for thought.