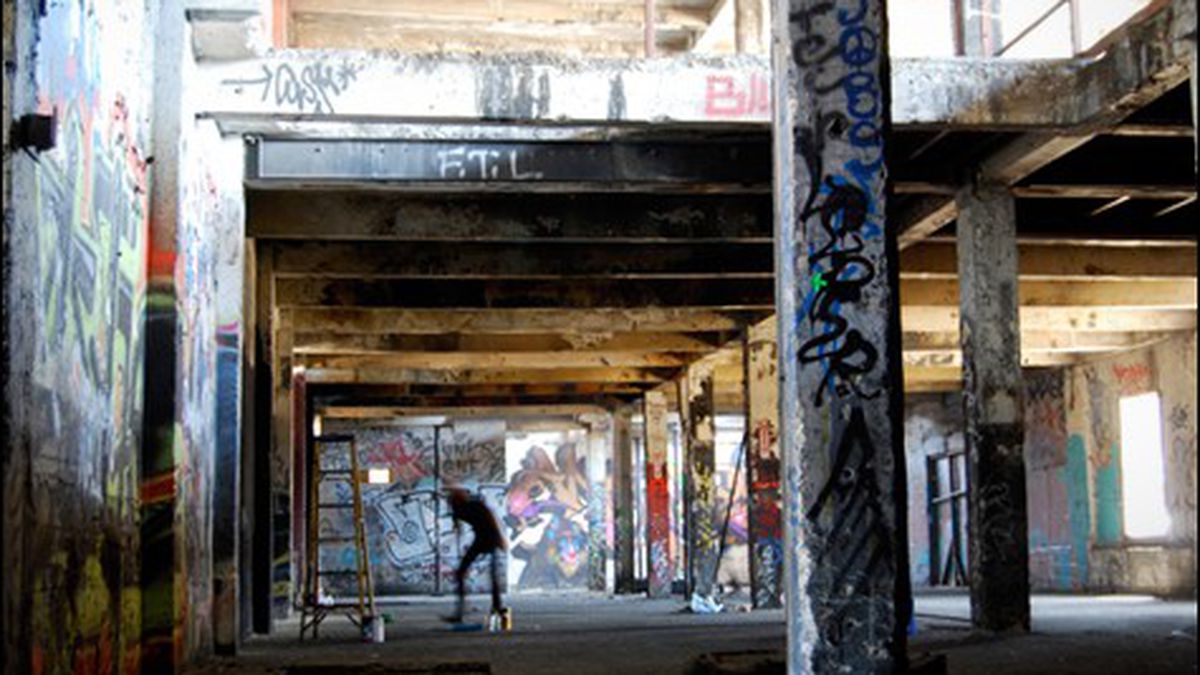 When Alan Varela bought an abandoned West Berkeley building for his construction company, it turned out he got much more than a decrepit 36,000-square-foot warehouse. In fact, when Varela saved the long-vacant property from possible demolition in February, he became the new owner of one of the local graffiti community’s best-kept secrets. Since 1999, when the ink company that had long occupied the site ceased operations, graffiti artists have been using the interior as an illegal canvas — so much so that by the time Varela showed up, the interior walls were thoroughly splattered and sprayed with the colorful scribbles of countless street artists.

Where some might have seen a major eyesore and a costly clean-up, Varela — an art lover who sits on the Oakland Museum of California’s board of trustees — saw a gem. “There was incredible art on some of the walls, and I wanted to preserve it,” he said. “Rather than saying, ‘We bought the building, you’re out of here,’ I said, ‘Let’s look at it from a different perspective.'” Varela was able to track down Paul (who asked that his last name not be used), co-founder of the ubiquitous street art blog and ‘zine Endless Canvas, to propose that he assemble painters to create some final pieces inside the building before it was refurbished.

It turned out to be a fortuitous offer. Last year, Endless Canvas documentarians curated a graffiti mural exhibit called Special Delivery that blanketed the walls of a 5,000-square-foot warehouse in Portland. Paul suggested using the West Berkeley warehouse to host a more expansive iteration that allowed artists to paint every inch of the three-story building’s interior, which would then be photographed and published in book form. Varela agreed, and for the past few months, more than one hundred Bay Area graffiti artists — including writers like Nesta, Del Phresh, and members of the LORDS crew — have been creating a public exhibition in their once recondite venue. Old pieces that had faded or fallen victim to rogue taggers have been refurbished, new ones have been added, and graffiti now fills nearly every inch of wall space.

For the artists who spent years scaling fences and squeezing through windows to paint the old warehouse, it’s been a bittersweet endeavor. After all, once the exhibit closes, the graffiti will be washed away and Berkeley will lose a beloved, albeit secret landmark. “I would prefer that it stayed an active, illegal spot,” Paul lamented, “but it got to a point where the building would either be demolished or become offices. We are sad to see it go — and that’s why we’re throwing it a good-bye art show.” Special Delivery Bay Area 2012 debuts at a free and all-ages event on Saturday, September 8, from 6 p.m. to midnight, featuring live hip-hop from Ear Peace Records and vinyl tunes by DJ Miggy Stardust. The warehouse can subsequently be viewed from noon to 7 p.m. on Sundays through September. In part to ensure the anonymity of the artists, the building’s address won’t be revealed until it’s posted on EndlessCanvas.com the day before the exhibit opens.

Radical Brownies: The Most Inspiring Young Women You’ve Ever Seen

The Play’s Not the Thing