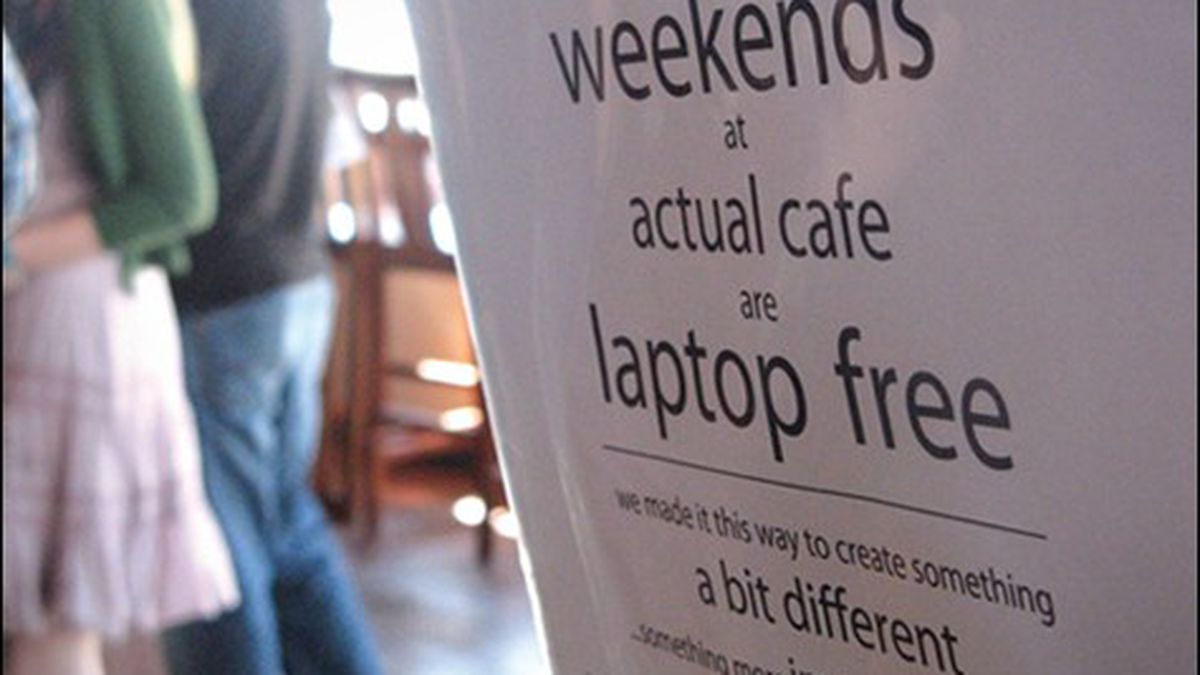 A Cup of Coffee With Your Wi-Fi?

As too many laptops threaten to turn local cafes into study halls, cafe managers seek solutions.

Devotees of the hand-brewed drip coffee at Philz weren’t the only ones to get excited when the San Francisco-based mini chain opened its Berkeley outpost last May. What the Philz staff quickly learned is a fundamental truth of the 21st-century coffeehouse: If you build it — a bright, airy space with plentiful seating and, above all, free wi-fi — they will come. With their laptop computer in tow.

And while some coffeehouses have no qualms about marketing themselves as wi-fi shacks, an increasing number of cafe owners feel ambivalent about the effect that too many laptops can have on their business — and not just because a freeloading laptop user might take up valuable real estate while nursing a single cup of coffee for as long as seven or eight hours.

Catherine Keep, the manager at the Berkeley Philz, says that on busy weekdays as many as 80 percent of the customers in the cafe’s main second-floor seating area are there with laptops, presumably working. “At the beginning we were here and it was like, ‘Geez, it’s a library up there!'” Keep said. “And that’s not fun.”

For many coffeehouses, that’s the broader problem. Keep says she doesn’t really mind if someone who visits the cafe to study or work on the computer stays a long time and doesn’t end up buying a lot. What does worry her, though, is when the laptops are so pervasive that the overall atmosphere becomes more akin to a study hall than the “grandma’s-living-room” vibe that Philz aspires to create — when customers who want to have a conversation feel uncomfortable because they’re afraid someone might give them a dirty look.

To address the issue, several coffeehouses have instituted specific policies designed to prevent their space from being overrun by laptop users. One owner has gone so far as to ban laptops outright on the weekends.

When Sal Bednarz opened Actual Cafe in North Oakland last September, he had visions of creating the kind of friendly neighborhood coffeehouse that he remembered from his pre-Internet youth. What he found, though, is that as soon as the cafe opened each morning, almost all of the tables were taken up by laptop users. Now, on Saturdays and Sundays, signs declare, “weekends at Actual Cafe are laptop-free” and “stop by and take a weekend break from technology with us.”

For Bednarz, it was a choice both philosophical and pragmatic. But while many customers have been supportive of the policy, Bednarz conceded that some were annoyed: “People, a lot of people, were very offended by my suggestion that having technology at our fingertips everywhere we went was a bad idea or that cafes … should have some intention of social existence behind them.”

Bednarz says the downside to the policy is the uncomfortable conversations he has to have with customers who don’t see the signs, or ignore them. Sometimes, those people feel embarrassed or angry and storm out, and then maybe later they’ll go to Yelp to write a negative review.

“I think people feel a lot of ownership around coffee shops in a way that they don’t feel about any other business,” he said. “If this were a sit-down restaurant, there’d be no questioning anything that I did. But because it’s a coffee shop, people have been conditioned to expect certain things from a coffee shop. But I don’t think that every coffee shop needs to provide exactly those things.”

Other East Bay cafes have tried less-drastic approaches with varying degrees of success. Michael Iida, who owns Mokka on Telegraph Avenue, says he never intended to use free wi-fi as a strategy to attract customers. “What we would prefer is for customers to come in and have conversations,” he said. When Iida found that lingering laptop users were preventing lunch customers from having anyplace to sit, he decided to pull the plug on wi-fi during lunch. And when that wasn’t enough of a deterrence, he covered up all but one of the cafe’s electrical outlets, allowing a computer’s battery life to serve as a kind of de facto “metering device.” So far, his policy has achieved the desired effect.

Meanwhile, shortly after opening West Berkeley’s Local 123 last summer, the owners instituted a “laptop-free zone” where customers who wanted to have a conversation, or do anything else non-computer-related, could find a seat. But computer users then crowded into the cafe’s front section, forming a veritable wall of laptops while the “laptop-free zone” would sometimes sit empty. And when the cafe simply began turning off its wi-fi on weekends, co-owner Frieda Hoffman said, “then people really just emptied out.”

The financial ramifications of laptop use are real. Hoffman said that even when customers follow the unspoken etiquette — if you’re going to stay a while, spend a little more and leave a bigger tip — that still is only about $5 or $6 of revenue from someone who’s essentially renting a workspace for, in some cases, an entire day. And that’s not even accounting for the most blatant freeloaders, who sit down with their study group and never purchase a single item. “Even the really crazy homeless people will buy something,” said her partner, Katy Wafle.

For the time being, the two woman have set aside their various policies. Instead, they’ve come to see as their responsibility to create a more lively atmosphere, especially in the evenings. And so they’re scheduling more events such as movie nights, live music, and coffee tastings. “We feel like the burden is on us to activate the nights,” Wafle said.

Everyone interviewed was quick to point out that they do value laptop-toting customers and don’t want to drive them away — and that they understand how difficult it can be to find a quiet place to be productive. The trick, then, is finding a balance so that all customers can feel welcome without threatening a cafe’s sense of identity.

At Philz, Keep says they haven’t done anything more aggressive than rearranging the furniture to create spaces that are more conducive to conversation than work. And she keeps the music loud enough so that people who are talking don’t feel like their conversations are being overheard — but not so loud that the laptop-users get distracted.