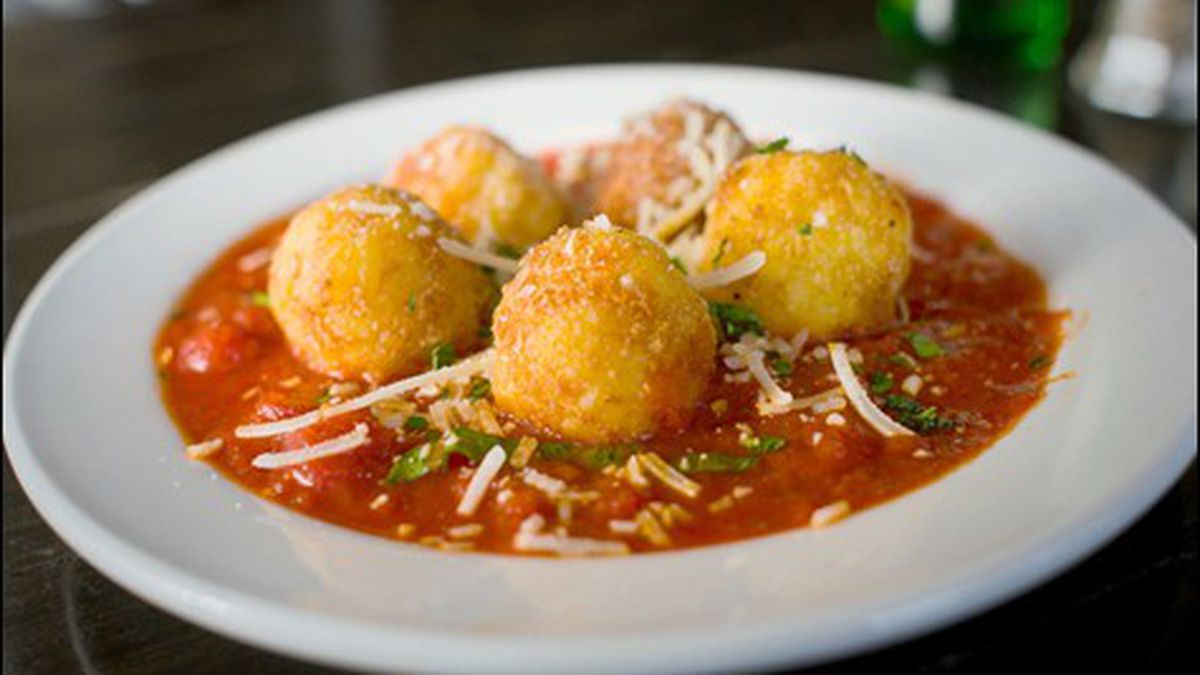 Bring the kids (or anyone, really) to this new Berkeley restaurant for unpretentious Cal-Italian.

For a place that prides itself on serving “seasonal and local comfort food” — all those of-the-moment buzzwords, and gluten-free pizza to boot — Berkeley’s newest Italian restaurant, Divino, is refreshingly devoid of self-importance.

Walk into the restaurant on a busy night and you won’t notice a single trendy thing. Not the tasteful abstract paintings or the dark wood. Not the smooth Fifties crooner singing something about love over the speakers. Not the waiter offering to grind fresh black pepper on your salad, big ol’ pepper mill in hand. Not the restaurant’s co-owner, Marco Polo Garbarino, greeting everyone who walks in like an old friend.

Instead, what you notice are the kids — one at every other table, it seems, and not only on Wednesdays, when children under ten eat free. There are nine-year-olds in cleats, their parents taking them out for pizza after Little League practice. There are strollered infants, to whom Garbarino offers window seats and lowered shades (so the babes can nap if they’re so inclined). I saw one pre-teen chattering away happily at the bar while she sipped one of Divino’s house-made Italian sodas. Next to her, the girl’s high-heeled, power-suited mom nursed a glass of red wine. It was like a scene out of The Parent Trap.

All this to say: Divino may be the kid-friendliest nice restaurant (or is that the nicest kid-friendly restaurant?) in Berkeley.

But over the course of my two visits, I also saw business dinners and first dates, old friends catching up and solo diners fiddling with their Kindle between bites of spaghetti. As one enthusiastic Chowhound poster put it, “It just was a place where everyone seemed to feel as comfortable as we did.”

Co-owner and Executive Chef Joan Gallagher’s rustic Cal-Italian fare is the perfect fit for the restaurant’s laid-back and homey vibe. Yes, the menu changes with the seasons and ingredients are sourced locally when possible, but we’re talking about unfussy, traditional Italian dishes. During our first meal at Divino, our server — a jaunty, curly-haired fellow — told my wife and me that his favorite items on the menu were the simplest things. Sound advice, it turns out.

Start, then, with the ribollita, a thick and hearty soup that’s chock-full of carrots, thickly sliced mushrooms, creamy cannellini beans, and tender kale, the whole thing topped with buttery croutons. On a blustery evening, nothing could be more comforting.

The Ligurian beet salad was also excellent: baby greens, small cubes of roasted red and golden beets, pickled red onion, crunchy chopped almonds, and olives — for a nice savory note — all coated in a light vinaigrette. It’s the type of salad you could assemble at home, though perhaps not with each component executed so flawlessly.

But where Divino really shines is in its fresh pasta dishes. While Gallagher’s fresh pappardelle isn’t the most delicate that I’ve had, the noodles serve as a fine blank canvas for a rich, slow-braised beef and pork ragu (a vegetarian ragu, made from root vegetables, is also available).

Meanwhile, the spaghetti pomodoro is a portrait of simplicity: pasta, a slow-roasted tomato sauce, olive oil. Nothing else. Here, the fresh spaghetti itself was the star — so springy and resilient, like good alkaline ramen noodles (you know, the kind you have to at least drive to San Jose for). I could nitpick and say the sauce was too acidic for my taste, and that there was too much of it. But the texture of that spaghetti? I thought about it for days.

With Divino’s pizzas, too, the simplest toppings proved best. My favorite was the cheeseless Marinara — the perfect union of tart tomato sauce, heady roasted garlic, fresh basil, and high-quality olive oil. Pizza geeks can take note of the fact that Divino’s pies are baked in a 40-year-old stone oven — gas, not wood — which gets cranked up to 650 degrees. I found the resulting crust tasty, but it didn’t have much of a char, and wasn’t as crisp as I would have liked.

For sake of comparison, one time I opted for the gluten-free dough, which is made from rice and tapioca flours and takes 25 minutes to bake. I’ll be honest: The pizza didn’t look appealing when it came out. It was too flat, too perfect-looking — like a cartoon pizza. Still, aside from a bit of powderiness, the gluten-free crust had surprisingly good flavor and was actually crispier than the regular crust.

Divino also offers gluten-free pasta, which comes in daily from The Pasta Shop, on Fourth Street, and many of the dishes on the menu can be ordered vegan.

Of all the dishes we tried, the only real clunker was an entrée of pan-seared jumbo prawns. The shrimp were fresh and “jumbo,” as advertised — but also bland, as though no salt, or any other seasoning, had been added. These were served over a bed of saffron-tinged risotto alla milanese, which tasted fine but lacked the unctuousness of a properly prepared risotto. The rice sat on the plate; it didn’t ooze.

Still, that same risotto made for one of my very favorite dishes at Divino, an appetizer of suppli — small balls of risotto that are stuffed with mozzarella and fried until they’re super-crunchy. Because the risotto balls are barely battered, the crunch comes from the rice itself, which ends up with that addictive toasted quality, like the rice at the bottom of a Korean stone bowl bibimbap.

Divino’s wine list is reasonably priced and mostly Italian, but I could never resist ordering one of their house-made Italian sodas. (My favorite was the pulpy Sweet Ginger, which had a nice kick.)

A bowl of silky-smooth butterscotch pudding makes for a lovely ending to a meal at Divino. And, after all that, given the quality of the food, the reasonable prices, and the warm, unpretentious atmosphere, anyone — kid or adult — ought to go home satisfied.