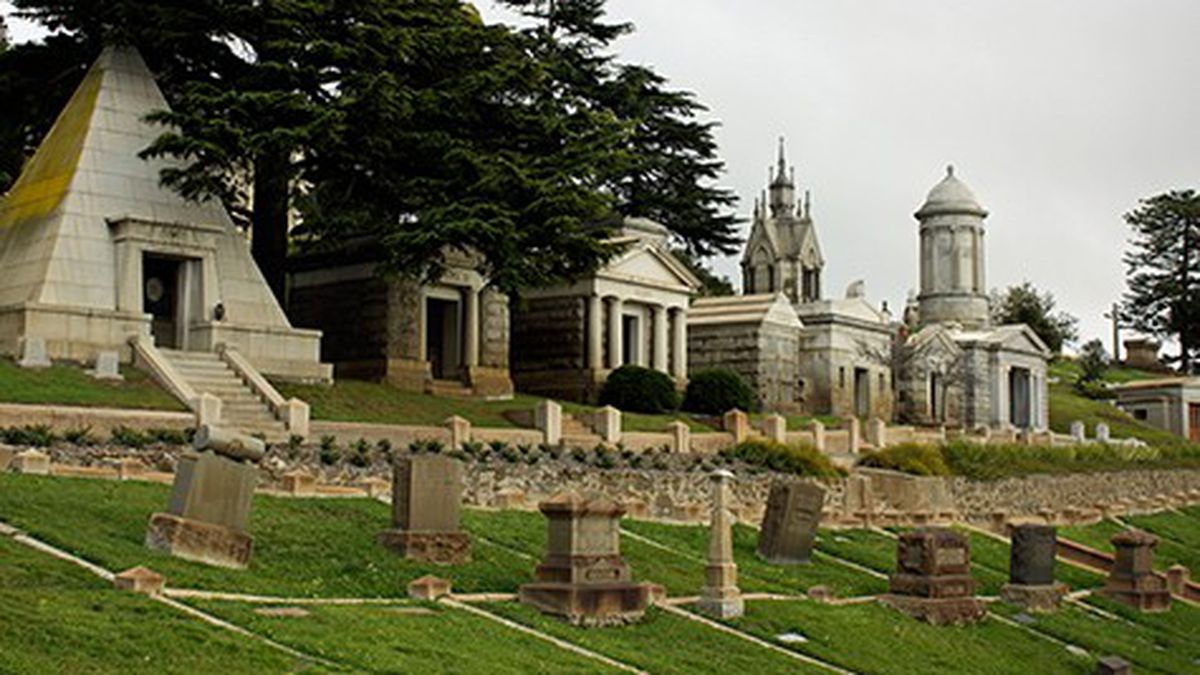 A City for the Dead — and the Living

Who would want to hang out in a graveyard — except perhaps ghosts and maybe a zombie or two? But Oakland’s Mountain View Cemetery, at the top of Piedmont Avenue, is much more than a city for the dead. The cemetery contains an estimated 200,000 graves, but you’re more likely to spot runners, dog-walkers, photographers, and even picnickers than you are ghouls. It’s easy to see why: The lush, 220-acre burial ground is filled with verdant lawns and bubbling fountains, as well as many winding paths and vistas with breathtaking views of San Francisco Bay. Beyond its aesthetic appeal, Mountain View Cemetery also boasts a fascinating past and is the final resting place of many distinguished local figures.

Mountain View was not the first graveyard built in Oakland — that honor goes to a short-lived cemetery formerly located at 7th and Oak streets, followed by another at 17th and Harrison streets. It is, however, the most notable and the longest-operating graveyard in the city. Mountain View “finally [gave] the city a burial ground it could be proud of,” said Dennis Evanosky, a local historian and the author of the 2007 book, Mountain View Cemetery.

In 1864, after the first two graveyards became overcrowded, Reverend Isaac Brayton, a principal of the College of California (the precursor to UC Berkeley), sold a large parcel of land for the new cemetery to a group of trustees. The trustees erroneously believed that Oakland would never spread to what was then rural land.

When they found out that Frederick Law Olmsted, the famed landscape architect responsible for New York’s Central Park, was in the area, the trustees convinced him to draw up a plan for the cemetery. “Mountain View is not only the only cemetery he designed, it is the only design he ever undertook on his own,” said Evanosky, in a recent interview. “His others, including Central Park, were done with his partner, Calvert Vaux.” Olmsted returned to New York while the project was underway and never collected the promised second installment of $1,500 for his work.

Though Mountain View’s general layout remains the same today, more plots have been added and the cemetery now includes three different types of burial grounds. The plots located along the main paths near the cemetery’s entrance are known as the “rural cemetery” style, a variety that originated in the 1830s. It is typically adorned with mausoleums, sculptures, and elaborate gardens. Another graveyard type, the “lawn cemetery,” was conceived in 1855 and is what comes to mind when most people think of a cemetery: upright tombstones in neat rows. The third style, the “memorial garden,” which emerged between 1906 and 1917, is an open grassy area with flat grave markers.

Mountain View Cemetery officially opened on May 25, 1865, and the first burial was of Jane Waer — an Oakland mother who perished from bilious fever, according to cemetery records — in July of that year. In the beginning, it was slow going for the death business: a second burial did not take place for another eight months. Business eventually picked up and as time went on, many of Oakland’s most notable figures were laid to rest in an area that docents have since named Millionaire’s Row, which features two tiers of paths lined with elaborate mausoleums. The most expensive monument is that of railroad baron Charles Crocker, namesake of the Oakland neighborhood Crocker Highlands. The Crockers spent $90,000 on the mausoleum in 1888 (approximately $2.4 million in today’s dollars). Other residents of Millionaire’s Row include Oakland Mayor Samuel Merritt, after whom Lake Merritt was named; Frederick William Delger, a shoe manufacturer who became Oakland’s first millionaire; Key System founder Francis Marion “Borax” Smith; and famed chocolatier Domingo Ghirardelli.

Mountain View is also the final resting place of many politicians, including five California governors, several mayors, and a number of US Senators, as well as iconic local architects Julia Morgan and Bernard Maybeck. One of the cemetery’s more infamous residents is Elizabeth Short, the so-called “Black Dahlia” whose brutal murder in 1947 captivated the public and remains unsolved.

While many of those buried in Mountain View lived long ago, the cemetery is still a vital part of Oakland today, both as “a place to visit to learn about California’s history,” as Evanosky says, as well as a tranquil refuge from the commotion of the city. Filled with engrossing historical details, gorgeous landscape architecture, sunny meadows, and stunning panoramas, Mountain View Cemetery is well worth a visit.

Docent-led tours are held at 10 a.m. every second and fourth Saturday of the month (visit MountainViewCemetery.org for details). More information about Mountain View’s interees can be found at MountainViewPeople.blogspot.com. Maps that list famous burial sites are also available at the office inside the cemetery’s main gates.