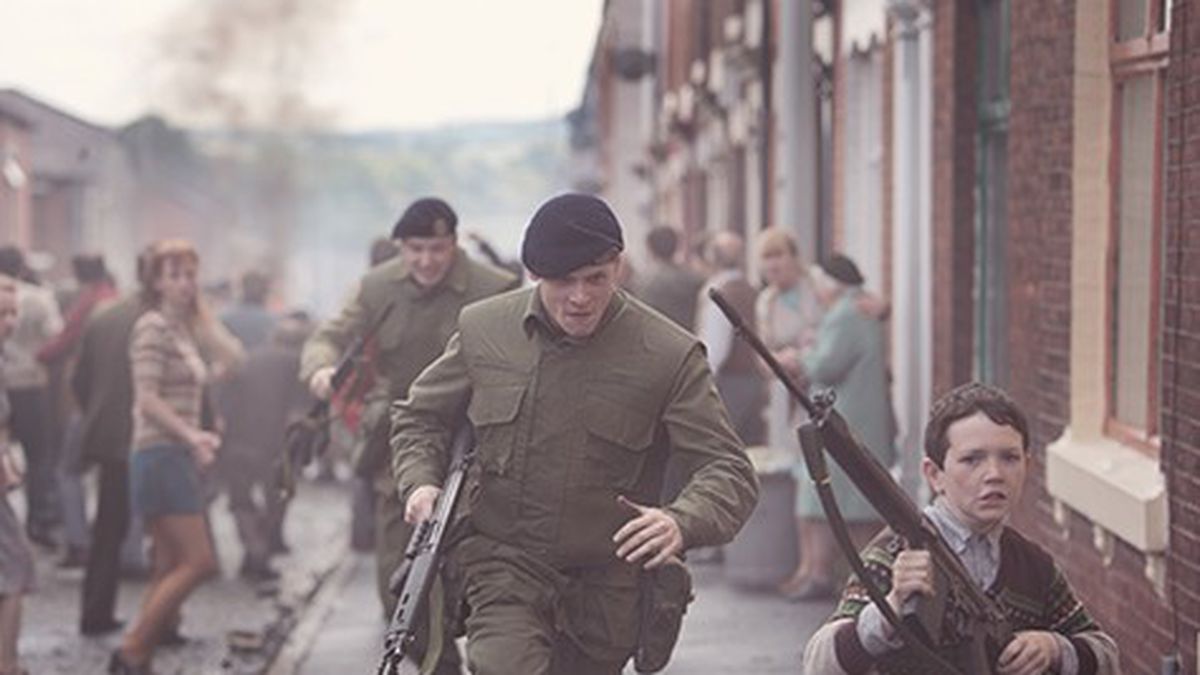 Americans are at least nominally familiar with the Northern Irish “Troubles,” but it’s doubtful many realize just how savage it really was for those caught up in it. (The armed conflict purportedly ended in 1998 with a ceasefire.) Yann Demange’s ’71 — a bloody, chaotic, sweaty-palmed, truly nerve-jangling reminder of the viciousness of that complicated civil war, told from the perspective of a British Army private and his bad day in Belfast — takes us there and makes us feel a bit of it.

After a quick training montage, Gary Hook (Jack O’Connell from Unbroken) gets shipped with his regiment to Belfast, where the endless fighting between Catholics and Protestants has entered a dangerous new phase. On his first day out, Gary’s “squaddies” are assigned to provide protection for the RUC (Royal Ulster Constabulary) on a brutal house-to-house search for weapons in a “Paddy” neighborhood. The RUCs’ approach is to ransack homes while screaming at the women and children and pummeling the men.

The streets are seething. A crowd gathers, rocks fly, and in the ensuing riot a boy runs away with a soldier’s dropped assault rifle. Gary and another soldier are ordered to chase the kid down, but they’re soon surrounded. As they’re being beaten, a young man suddenly steps up and kills Gary’s mate with a shot to the head. Gary manages to get up and run, but his comrades have left him behind. Alone, wounded, unarmed, and lost in an incredibly hostile city, his job is to find his way back to his barracks after dark.

Director Demange, a veteran of violent urban actioners on British TV, depicts Gary’s ordeal at a furious pace. In a town where armed goons man checkpoints separating “us” from “them,” a wrong answer can get a man killed. We never really get to know Gary except as a scared rabbit. Everyone he meets that night seems to want his blood. On one side are the Loyalists, bolstered by the thuggish RUC, the British troops (despised by both camps as outsiders), and the MRF (Military Reaction Force), a shadowy plainclothes British Army unit operating as a death squad hunting down Irish Republic Army gunmen. The IRA, in its bewildering factions and intrigues, occupies the other side. God help those caught in the middle. If you can’t make up your mind which side you’re on, you’re as good as dead.

We soon see that none of the killers, on either side, has any particular loyalty to anything but the gun. The best we can hope is that somehow Gary can make it out of this hell, taking us with him. As with most first-class war movies, ’71 is undeniably anti-war. If you can take it, it’s a must-see.