The Jimmy Lyons era of big-band programming is over at Monterey Jazz Fest. So is all the straight-ahead stuff that went with it. For those who associate the word “jazz” with Paul Chambers laying a cool bass ostinato over Jimmy Cobbs’ brushstrokes, this year’s fest would have been an awakening of sorts. The artists featured on Saturday’s lineup were part of that tradition, but conversant in many others — blues, hip-hop, world music, gospel, even noise. This year’s festival included acts like The Nice Guy Trio, Lisa Mezzacappa’s Bait & Switch, Billy Childs with the Kronos Quartet, and Brass, Bows & Beats Hip-Hop Symphony. For a 53-year-old institution, it was adventurous.

Twenty-four-year-old Troy “Trombone Shorty” Andrews was clearly this year’s big, emergent star. The kid can play just about any brass instrument he gets his hands on. During his set at Monterey, he switched from trombone to trumpet, sang, led a seven-piece band, quoted James Brown, Juvenile, Black Eyed Peas, and Sinatra, clapped a second line rhythm, and led rousing versions of the old standbys: “When The Saints Go Marching In” and “Down By The Riverside.” His group, Orleans Avenue, bills itself as a Big Easy-style brass band, but it poaches liberally from other regions — for some songs, the drummer played a West Coast backbeat. Shorty ably made himself a festival sex symbol. In the program guide, he posed in a wifebeater, dark sunglasses, and an expression that translated: “Whatever the proposition is, you know, I can hang.” 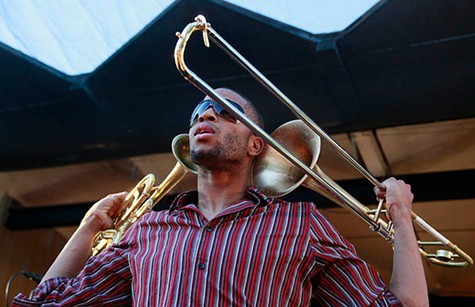