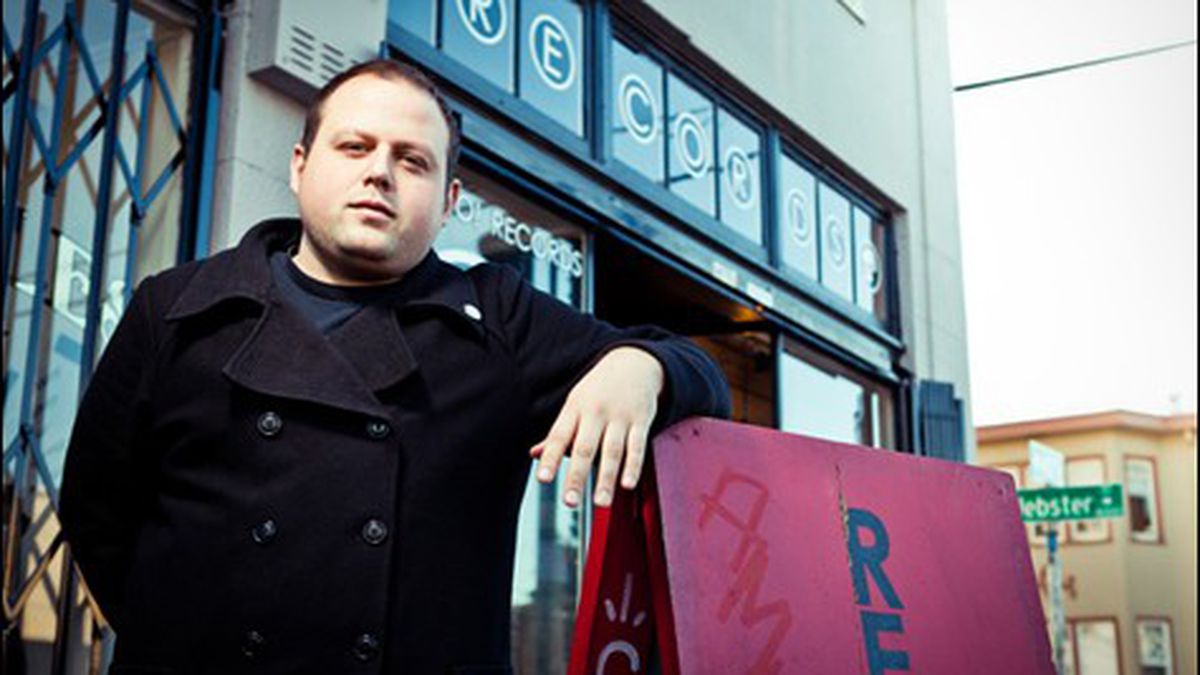 Steve Stevenson has a revealing view from the windows of his new Oakland apartment: If he looks out across 40th Street, onto the block wedged between Webster and Shafter streets, he can trace the swift progression of his small record store over the past several years. Stevenson first opened 1-2-3-4 Go! Records, a physical component to his now ten-year-old record label of the same name, in 2008 in the tiny storefront now home to Subrosa Coffee. After just one year he’d outgrown the space — a relatively easy feat considering its cramped quarters, but still a promising sign in a time of economic downturn and rapidly declining album sales.

So he relocated just two doors down, into a location about three times the size of his original shop. He installed attractive wood paneling on the walls, which soon filled up with a blend of punk, hardcore, and rock ‘n’ roll records. Business has since been thriving in the new, roomier headquarters.

Stevenson said he had no immediate plans to leave his current space, next door to Manifesto Bicycles and across the street from the recently opened mac ‘n’ cheese joint, Homeroom. That is until Mark Becker, a neighborhood acquaintance, approached him with an offer that he said he just couldn’t refuse. Becker owns an architectural design firm, Mark Becker, Inc., as well as the large building that houses it, across the street from Stevenson’s shop. When a telephone networking company moved out of the building, rather than renting it out as another office space, Becker proposed that Stevenson become his newest tenant and open an all-ages venue inside the spacious new shop.

The two had spoken last year about the possibility, but at the time it wasn’t financially feasible for Stevenson. “At the time it just didn’t make sense,” he recalled. “It was going to be too expensive just to step foot in the place, let alone build it out or anything like that. It just wasn’t feasible.” But this time Becker offered to offset some of the overhead costs of the venture by helping to knock down unneeded walls, erect a stage, and other needed construction.

“It came to the point where part of me says, ‘I’m happy where I am. I could stay here forever if I wanted to,'” Stevenson reasoned. “And then a guy who owns a building basically says, ‘I want to do everything that it’s going to take to make this work for you.’ And you kind of have to go with that.” And it was with that resolve that Stevenson signed the lease, and now aims to unveil his revamped shop-slash-performance space on August 1.

In its current state, the new space is empty, dusty, and drab, a ghostly relic of its officey past. Paint needs applying, sound needs proofing, and of course the requisite permits to host ongoing live shows need approval from the city. It’s hard to imagine it bustling with record-buyers and show-goers, or the sounds of drum beats and guitar twangs reverberating against the walls. But Stevenson is diligently working out those details. He’s also moving all his worldly possessions into what will be his new apartment upstairs from the shop.

“This is one of those weird opportunities,” he said, laughing incredulously at his newfound situation. “A friend of mine asked me today, ‘Were you born with a horseshoe up your ass?’ I’ve never heard that expression before, but I think I was.” But he was quick to point out that he got to where he is not just by luck, but also a lot of hard work. He singlehandedly runs his record label from the back of his shop, employing just two part-time employees who collectively cover two shifts a week. He’s also been busy organizing his label’s ten-year anniversary fest, three days of shows starting July 22 at the Oakland Metro Operahouse. It’s no exaggeration to say that his is more than a full-time job.

Stevenson’s devotion is part of what compelled Becker to bring him into his building. And the designer admits straight away that doing so is a bit of a gamble. Aside from his own business, the building’s tenants include a carpenter and a guy who stores merchandise collected from estate sales. “This is a stretch for me because it’s kind of out of my comfort zone,” he said. “But I think it’s going to be great.”

Part of Becker’s interest in Stevenson’s business could have something to do with the fact that his two teenage sons are part of the same punk rock scene that the 1-2-3-4 Go! label and store serve. The young Beckers are not only fans of the shop, but play in a band, Emily’s Army, along with the son of Green Day frontman Billie Joe Armstrong. But Becker explained that what it really comes down to is that he was impressed by the hard work of Stevenson, who’s in his thirties, and other young business owners on the block. At the risk of hyperbole, Becker is something of a modern day Medici, using his position of financial security to support the endeavors of a young risk-taking entrepreneur.

“I have a lot of confidence in him,” Becker said. “I’ve been here a long time and I’ve seen some of the excitement brought by the young folks. They’re not plopped in the middle of Piedmont Avenue or Lakeshore. They took a risk on a neighborhood that had nothing and they’re making something of it. I’m just trying to help that along a little bit.”

Becker’s vision for the block — he calls it more of an idea than a concrete plan — includes the installation of a beer garden in the alley between Homeroom and Stevenson’s new storefront. He’d like to help bring in food trucks to service the area in front of his property and get some art on the exteriors of nearby buildings.

Stevenson is grateful for Becker’s help. “He has an amazing heart,” he said. “He knows exactly what needs to happen here, and he’s willing to do things that aren’t necessarily financially expedient to make it happen. Because in the future, he’s building a neighborhood.”

Before the opportunity presented itself, Stevenson had been ruminating for some time on the dearth of local all-ages venues. Local bands, including those on his label like the Sixties-inspired garage-pop trio Shannon and the Clams, have a handful of East Bay houses and warehouses in which to play shows. But for kids just getting into the independent music scene — those whose parents might not be thrilled at the aspect of dropping them off at a random house show — there are few options outside of 924 Gilman and larger concert venues. “The lack of all-ages venues has really bummed me out for a long time,” Stevens said. “I’m concerned we’re going to lose a whole generation of kids because they don’t have access to this music.”

The new show space could see as many as eight shows a month, barring potential noise complaints from nearby residents. Stevenson said he has to feel out the neighborhood, though the relative lack of residential space on the block, combined with a history of successful in-stores at his current spot, could be a promising sign. “Sound should not be a huge issue,” he said. “But it’s one of those things — until we get in there and turn it on, we’re gonna have to see.”

Through the Looking Glass