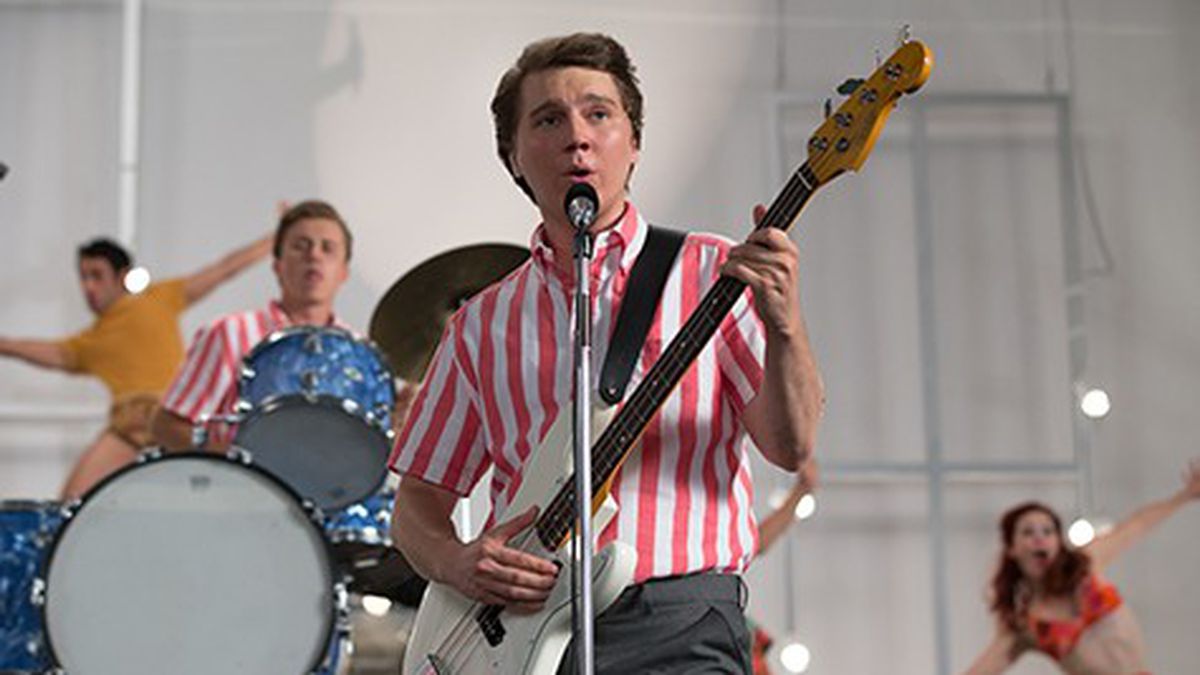 Love & Mercy is the best movie of the year so far.

A reviewer’s note: I was never much of a Beach Boys fan. At the height of their Top 40 radio popularity, when the sounds of “California Girls” and “In My Room” were ringing out from dashboards and jukeboxes all over the country, this writer was more apt to be listening to the Rolling Stones, Muddy Waters, and Thelonious Monk. It eventually became an article of faith among discerning rock fans that Brian Wilson, the talent behind the Beach Boys, was a bona fide genius. But he never really spoke to me.

Love & Mercy makes us want to tear up that paragraph and take another look. It’s far and away the best movie of the year so far, a brilliantly executed narrative portrait of the mercurial Wilson, played at two stages of his life by John Cusack and Paul Dano. Producer-turned-director Bill Pohlad (Wild, 12 Years a Slave, The Tree of Life) and the writing team of Oren Moverman and Michael A. Lerner, working off Brian Wilson’s own writings, assemble the elements of his troubled emotional life with such imagination and daring that it sweeps us off our feet. It’s simply the best pop-music narrative bio most of us have ever seen.

Even by the standards of such 20th-century pop icons as James Brown, Charlie Parker, Billie Holiday, Ray Charles, or Johnny Cash, Wilson’s formative years were challenging, mostly because of his abusive father (played by Bill Camp). Brian’s pain manifested itself in the crevices of his compositions for the Beach Boys, and his intense feelings of insecurity — combined with serious drug addiction — eventually led him to put himself in the care of overbearing psychologist Dr. Eugene Landy (Paul Giamatti), who, as the film opens, controls the mature Brian’s waking hours as thoroughly as if the hit recording artist were in prison.

We first meet the “older Brian” (Cusack) in a Los Angeles Cadillac showroom, where, having temporarily slipped the leash of Dr. Gene’s goonish babysitters, he’s shopping for a new ride with the guilelessness of a lost schoolboy. Instead of calling security to deal with this pathetically stoned customer, sales rep Melinda Ledbetter (Elizabeth Banks) takes pity on Brian and listens to what he has to say. Their personal relationship — the genuine love and mercy of the song title — flowers organically in the midst of an anti-chronological, impressionistic psychodrama that patches in Beach Boys album sessions (including the legendary Pet Sounds dates, featuring Dano as the younger Brian), scenes of the Wilson brothers’ dad messing up their lives, and more trippy sequences than The Doors and Purple Rain combined.

Even if we knew nothing about Brian Wilson, this would be a wonderfully kaleidoscopic portrait of a tormented artist, à la Vincent Van Gogh or Kurt Cobain. The same voices in his head that drive Brian to despair also inspire ingenious, healing tunes with intricate arrangements. As studio musician Hal Blaine (Johnny Sneed) admiringly tells him: “You’re touched, kid.” Filmmaker Pohlad and writers Moverman and Lerner insert the music at just the right moments to punctuate the action. The sound engineering itself, in such scenes as the stream-of-consciousness “rescue” montage, could stand alone as a luminescent document of Wilson’s work. And let’s not forget the “silverware clatter freakout” — a frightening evocation of madness. Love & Mercy‘s explorations of the artistic temperament form a densely woven tapestry that can be visited repeatedly.

Cusack and Dano completely disappear into Brian’s head in two of this year’s finest character performances, anchored by Banks’ creamy blond love goddess Melinda. Cusack looks nothing at all like Wilson, and yet we only have to spend a minute listening to Brian negotiate his anxieties to be convinced that he’s the only one who could write “Good Vibrations,” aka the “pocket symphony to god.” Dano’s younger Brian strikes the same nerve. Pohlad directs them as a two-part harmony in the key of rock-star minor. Giamatti again proves he’s a master of impersonation, equally adept at nice guys and loathsome predators. Brian’s escape from Dr. Gene’s “punitive therapy” is only one of the movie’s successive moments of redemption.

Of course, in the long view, the Beach Boys won’t be remembered solely as therapeutic. The tricky notion that one person’s pain can be another’s fun has been a staple of the pop-music biopic, and the family act from Inglewood has plenty of fun while Brian suffers silently. But Brian finally makes it out of his room and charts his frustrations in deceptively upbeat tunes. Love & Mercy takes those steps with him, to the wonderment of us all. He means it when he sings, “Don’t Worry Baby.”

Correction: The original version of this article misstated the title of the song known as “the pocket symphony to god.” It should be “Good Vibrations,” not “God Only Knows.”
Facebook
Twitter
Previous articlePublic Interest Attorneys Ready to File Lawsuit to Block Sale of City-Owned Land
Next articleVote for the Best of the East Bay 2015!
18,632FansLike
0FollowersFollow
67,429FollowersFollow