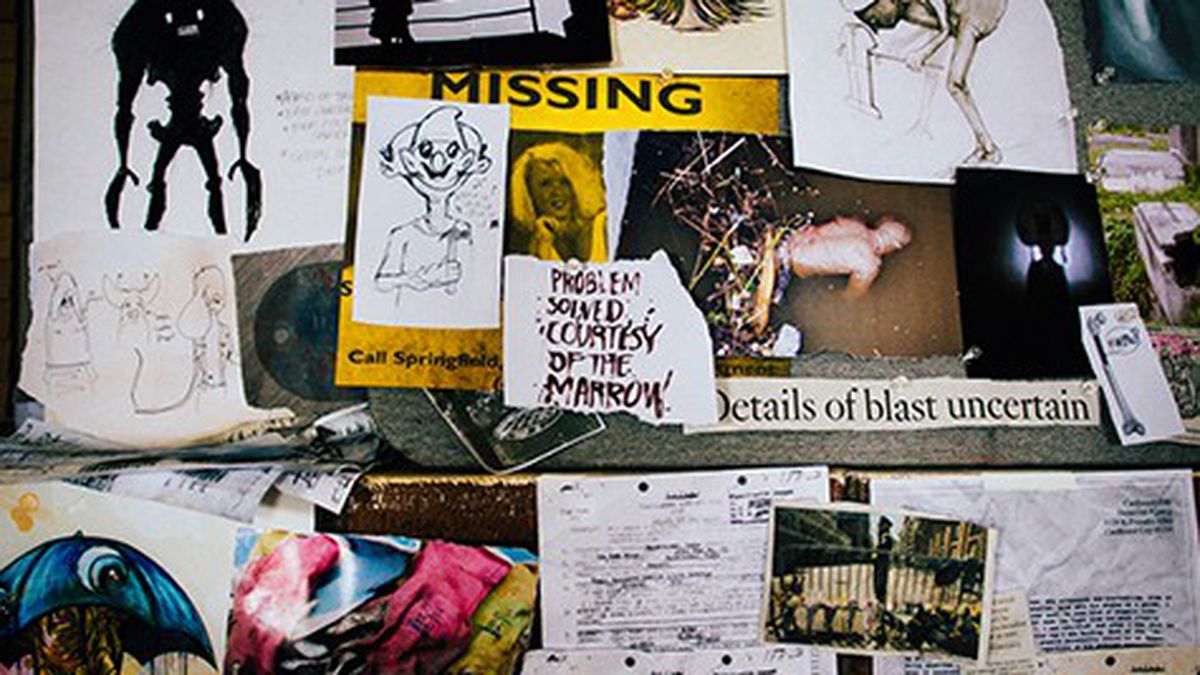 Alex Pardee's odd and alluring artworks make it to the big screen in Adam Green's new meta-horror film Digging Up the Marrow.

If there’s one thing that horror film director Adam Green and East Bay artist Alex Pardee have in common, it’s a love of the unknown. Pardee likes to believe that in every place he can’t see — corners hidden in shadows or rooms with closed doors — monsters are hiding. And Green was the type of kid that crept under his bed in hopes of finding something there. If a monster was there, he thought, it would be there to protect him from the real scary things in the world — like people.

That attraction to the creatures and characters that typically scare people away is what drives the narrative of Digging Up the Marrow, a recently released cinematic collaboration by Green and Pardee. In the film, an obsessive detective named William Decker is convinced that an underground world exists just beneath ours, where monsters secretly live. He calls it the “marrow.” Rather than being afraid, William makes it his life’s goal to find out everything he can about the creatures and their world.

Perhaps surprisingly, Digging Up the Marrow begins with Green reading fan mail. As a seasoned horror director with a devoted fan base for movies like Hatchet 1 and 2, and Frozen (not the Disney cartoon, obviously), as well as his television series Holliston, he often receives incredibly involved fan fiction, and other creative elaborations on his work. Normally, he doesn’t appear in front of the camera, but Digging Up the Marrow is different. It’s a meta-horror film in which Green plays himself in a “mockumentary” style. He follows Decker, hoping to make a film about his wild theories, but is eventually forced to accept the idea that monsters might actually be real. Pardee’s role was to create those monsters.

It’s appropriate that the film begins with Green sifting through fan mail, because that’s how the project began in real life. After many years in the film industry, Green had been yearning to work on a project that was more “artsy and weird.” One day, he received a long letter claiming that the killer in Hatchet was real, and that the author could prove it. He was inspired to make a film in which he interviewed the sender of the letter, asking the writer to prove his or her claim. But ultimately he was wary of spinning off of a franchise that had run its course. He needed a new universe to explore.

Not long after, at a horror convention in 2010, Pardee approached Green and handed him a booklet. “Thanks for the inspiration,” he said, before scurrying away. The booklet was from a show Pardee had done the previous year called Hiding from the Normal.

Pardee boasts a cult following of his own. The East Bay native has been drawing monsters and other absurd characters since he was fifteen. Now, he runs ZeroFriends, a business through which he sells merchandise featuring his work and the work of Dave Correia. ZeroFriends has a store and gallery on Haight Street in San Francisco, and previously resided on 26th Street and Telegraph Avenue in Oakland.

When Pardee prepares for a show, he develops a narrative premise to help him push his imagination into new territory. For Hiding from the Normal, he claimed to have found the lost journal of a detective who was obsessed with the idea that monsters were real. The show was made up of sketches based on the descriptions of the monsters in the journal, which Pardee actually created.

That concept turned out to be the missing piece that Green was looking for. A few days after receiving the booklet, he called Pardee to propose that they make a film in which Green receives the journal as fan mail and decides to make a documentary about the author. Not long after, actor Ray Wise (likely still best known for his unforgettable role as Laura’s father in David Lynch’s TV show Twin Peaks) enthusiastically jumped into the project as a convincing Decker. After about five years of secret production, Digging Up the Marrow finally premiered in February.

The film’s meta-narrative is interesting, but what actually sets it apart is the monsters. Green asked Pardee to take full command over designing the creatures, which were sculpted into life-size, three-dimensional, mechanical puppets by Greg Aronowitz, a Hollywood veteran whose credits include Jurassic Park, A.I., and Minority Report. Green always insists on making his monsters the old school way, without CGI. “Audiences are too smart — they know when they’re looking at a two-dimensional cartoon,” he said in an interview.

That was ideal for Pardee because he got to see his sketches come to life, but it also caused a lot of technical headaches for the production team. Pardee is entirely self-taught, and has zero training in puppet design, so he simply drew the oddly proportioned and bizarre characters the way in which he was accustomed. Because of that, the production team was pushed to its limits replicating monsters that would likely have been deemed too difficult to accomplish by an experienced designer. Teams of people were needed to operate each puppet, one of which had a head that weighed over 120 pounds and another of which utilized heavy-duty springs typically used for garage doors to operate its massive arms. “Because I didn’t know that it couldn’t be done, they did something they didn’t know could be done,” said Pardee.

Over the past couple of weeks, Green and Pardee have been touring the country showing the film to a mixture of their fans, and tugging along the monster puppets for after-screening art shows. The film will be released in select cities throughout this week and is currently available on all video-on-demand platforms. The DVD will be released on March 24, and will include a behind-the-scenes segment with Aronowitz, showing how the monsters were made.

Green said the best thing about screening the film so far has been hearing that many viewers are rethinking the idea that monsters are necessarily evil. “In the world that we live in today … it feels like we’re taking steps backwards with intolerance toward things. … If you can just open up your mind a little bit to things that are different, maybe the world can be a better place,” said Green.