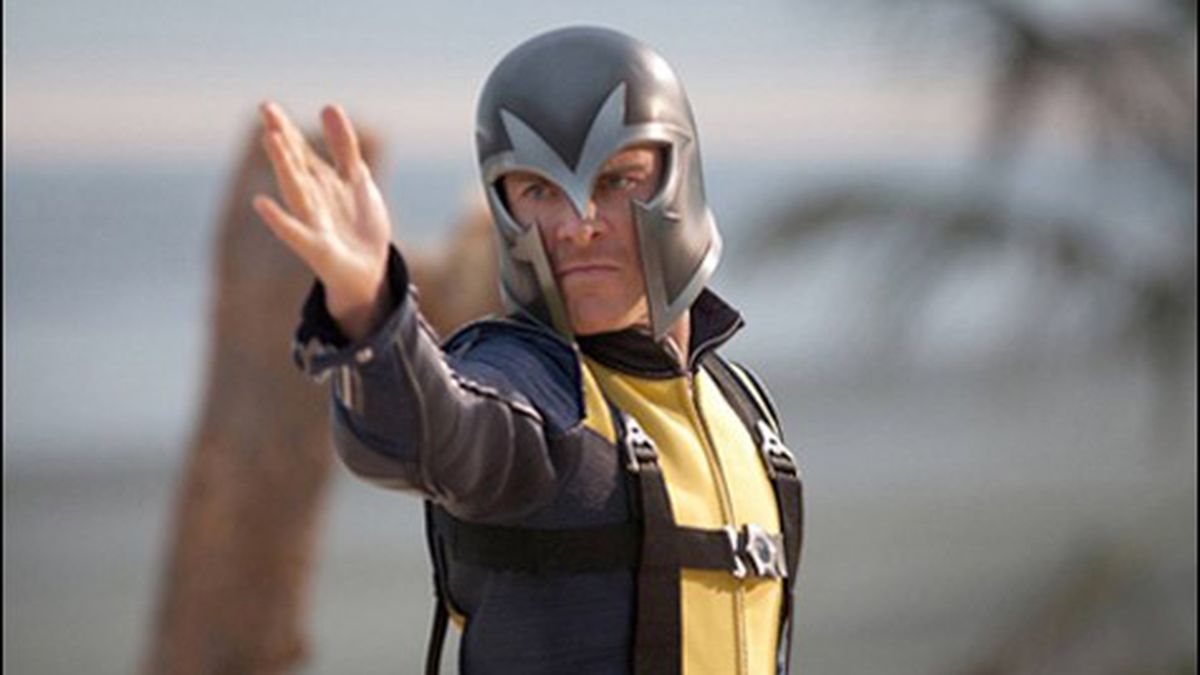 How they got that way, more or less.

It’s the one in which little Erik Lehnsherr (played by juvie actor Bill Milner), a German Jewish boy circa 1944, gets sent to a Nazi death camp with his family, is discovered by the insidious camp commandant (Kevin Bacon) to possess amazing telekinetic powers, and is forced to demonstrate his skills at the point of a Luger. He doesn’t perform fast enough, so the commandant kills the boy’s mother. Erik survives the camp and grows into a less-than-full-fledged superhero (Michael Fassbender) determined to crown his destiny by getting revenge on the commandant, who now lives in the United States under the name Sebastian Shaw. But that’s just the beginning of Erik’s adventures.

Fascinating as that scenario might be, it’s selling the movie a bit short because there’s so much more than the tale of Magneto — Erik’s ultimate identity — to this sprawling, epic-size, multi-faceted, well written, engagingly acted, summer tentpole spectacle.

In fact, we could spend an hour tracing the narrative threads of Marvel Comics‘ popular series. The original comic-book story by Sheldon Turner and Bryan Singer — adapted for the screen by British filmmaker Vaughn along with Zack Stentz, Jane Goldman, and Ashley Miller — involves numerous characters with life stories almost as compelling as Erik/Magneto’s. Take poor little rich kid Charles Xavier, played as an adult by James McAvoy. He grew up with the ability to not only read people’s minds but to control them as well. What a responsibility. Luckily for him he found a childhood ally in Raven/Mystique (Jennifer Lawrence), a blue-skinned, red-haired visitor from another planet who prefers to be a white-skinned blond while on Earth.

As the movie proceeds, Erik/Magneto, Charles/X-Man, and Raven/Mystique interact vigorously with several other super-powered “mutants,” some of them friendly like Hank McCoy/Beast (Nicholas Hoult) and Janos Quested/Riptide (Álex González), some of them hostile like Emma Frost (January Jones) and Azazel (Jason Flemyng), and all of them inordinately fond of showing off their tricks. The globe is evidently crawling with exceptionally-abled, non-conformist young people, aka “Children of the Atom,” in great need of proving themselves.

That’s fortunate because the “normal” humans have made a pudding of the world situation. As we join the story in 1962, both the Americans and the Soviets are racing toward the Cuban Missile Crisis, a nuclear standoff that could mean the end of the world. Erik and Charles and their team, with the encouragement of a CIA agent named Moira MacTaggert (Rose Byrne), have tentatively thrown in their lot with Central Intelligence, even though the boys in Langley are stupid and sexist and just don’t get the concept. Evidently the most intelligent person at the CIA is Oliver Platt — there’s a scary thought. The Russians unfortunately lack any superheroes at all. Meanwhile, evil Shaw and his Thought-Impervious Helmet (don’t ask) are hoping to provoke World War III with the help of Frost, red-faced Azazel, and winged former bar girl Angel (Zoë Kravitz). Shaw craves chaos the way the US and Russian navies need combat. Looks like a job for the X-Men, the world’s real police force.

If the above sounds a wee bit silly, it all unfolds brilliantly onscreen under the guiding hand of director Vaughn (Kick-Ass). He understands the basic humanism of the Marvel world-view. The concentration camp sequence is what Inglourious Basterds could have been. McAvoy (The Conspirator, Atonement) just keeps building his remarkable portfolio. Fassbender ditto. With Lawrence’s Raven, somebody finally gets blue skin right. Jones enlarges on her essential Mad Men Betty Draper chilliness as killer ice queen Emma Frost. And Bacon, destroying everyone in the shot with him as all-purpose villain Shaw, surpasses even his most hilarious worst excesses from JFK.

Effects are first-rate. Half the cast flies instead of walking, with exquisitely timed stunts that build to a satisfying, if cliff-hanging, crescendo. The main thing that the super-powered mutants, even some of the nasty ones, want to do is to be accepted for what they are. Awww. They’re part of one of the season’s most uproariously entertaining movies, and that should be enough.

Facebook
Twitter
Previous articleAre Alameda’s Firefighters too Powerful to be Reformed?
Next articleWednesday Must Read: Brown and GOP at Budget Impasse; Huge Snowpack Could Cause Flooding
18,639FansLike
0FollowersFollow
67,429FollowersFollow

Best Cornbread: An end to the cornbread wars?