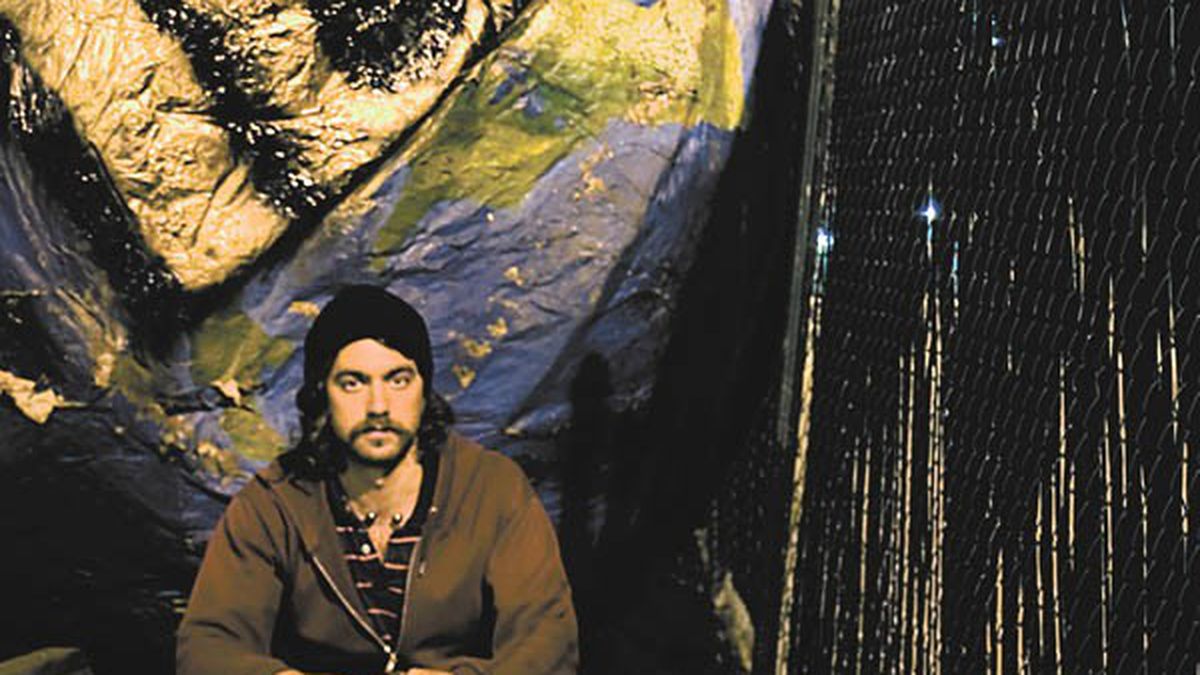 Writing His Own Prescriptions

Winston Goertz-Giffen has Mennonite blood, but you wouldn’t know it by looking at him: He sports a scraggly mop and a Fu Manchu moustache. He’s usually clad in stylishly tattered hipster garb. Born in the California Menno-mecca of Fresno, Goertz-Giffen meandered through Germany, delved into Austin, and eventually ended up back in California roughly five years ago. These days, he says, “I don’t associate with any religion, but enjoy what I can draw from the vast well of inspiration.”

What has been a constant, however, is his music-making. Goertz-Giffen’s rock ‘n’ roll shrouds itself in gothic melodies, fueled by thumping, epic rhythms. Now, he’s simultaneously launching the first album, Thinkinging, of his latest project (Ted the Block), his offbeat recording operation (Warehome Studios), and an independent label (Bye Gone Records).

Let’s start with the music. It’s hard not to hear the influence of Beck on Thinkinging. The album’s addictive sound lies in its arena-sized beats melded to lyrics of angst and existential fury. I can’t quite put my finger on it, he laments in “Kicking Down the Ladders.” A moment later Goertz-Giffen confesses, I’m writing my own prescriptions just because I can — it’s a strange occupation. The affect’s strangely joyful, a sensibility synthesized and accentuated by layers of harmonies, faux-heroic bell tollings, and even the occasional trumpet flare.

Goertz-Giffen does most of the instrumentation and arrangement. Some of it was recorded in a friend’s studio in Austin, the rest in his bedroom over the last two years. That doesn’t sound like a long time, but Goertz-Giffen is self-admittedly slow — as the album’s name refers to. “My approach to music-making is that it’s a process of thoughtful deliberation, not storytelling, but more of a description of a visual image that is linked to an idea I have about life or a particular situation.” Hence lovely, surreal lyrics waft up, like I’m going under her beautiful skies, dreaming of seeing and truly believing from “Much Was Done.”

He is a believer, though, when it comes to his ambitious and unconventional approach to recording music. With Thinkinging, the artist is undertaking “an experimental template for putting out vinyl (with an MP3 download coupon).” He plans to record bands in his newly minted Warehome Studios — a fashionably grungy warehouse where Goertz-Giffen and some of his friends also live — and then “work creatively with the artists to formulate a plan to raise money for the production costs” of putting out albums on vinyl. Though he has “reservations about the music industry,” Goertz-Giffen says he’s got loads of ideas for how to generate funds.

For starters, he plans to make a limited run of CD-Rs with “creative packaging” to sell for $5 to $10 apiece. In addition, he plans to host benefit shows and monthly sales of various accumulated musical equipment and art supplies. He also plans to whip up a high-quality zine called Bye Gone, featuring Bay Area artists and writers.

It’s more theory at this point, but there’s good reason to believe it might fly. Goertz-Giffen has met his financial needs creatively before. Thinkinging‘s unofficial title is May Rent, which makes it the seventh in a series of album projects titled thusly over the years (August Rent, October Rent, April, June, September, and March — though not all are from the last twelve months). “I used to make these to pay my rent for the given month back when I was a little less stable in the” — he pauses — “traditional sense.” Then he adds: “It worked for everyone, except March Rent, because I was squatting in West Oakland.”

Meanwhile, the warehouse is being put to other art-centered uses: Vanessa Maida is re-opening Fort Gallery on the premises. Formerly based in the Mission District — and shut down because of noise complaints — Maida has collaborated with local and international artists, setting up art-opening bonanzas played by bands like People People, Man Miracle, Grass Widow, Anni Rossi, and Tea Set.

Goertz-Giffen is lining up his ducks as well. This year he’s shooting to record Anteater Eats Ant, the Aimless Never Miss, Trainwreck Riders’ bluegrass side project, and Andrew Macy, among others. He’s already recorded some of these bands and collaborated with other creative scensters like Devon Satterfield.

So perhaps his Mennonite heritage — a group known for its communal living — is revealing after all: Goertz-Giffen plans to take a break from his own personal projects for at least a year to record other artists. And then there’s a San Francisco Mennonite Church — a lefty collection of quasi-believers — as well as a cache of irreverent Mennonite-connected writers and artists congregating in Northern California. After all, when Mennonites start growing Fu Manchus, you know something special is going down. &#8;