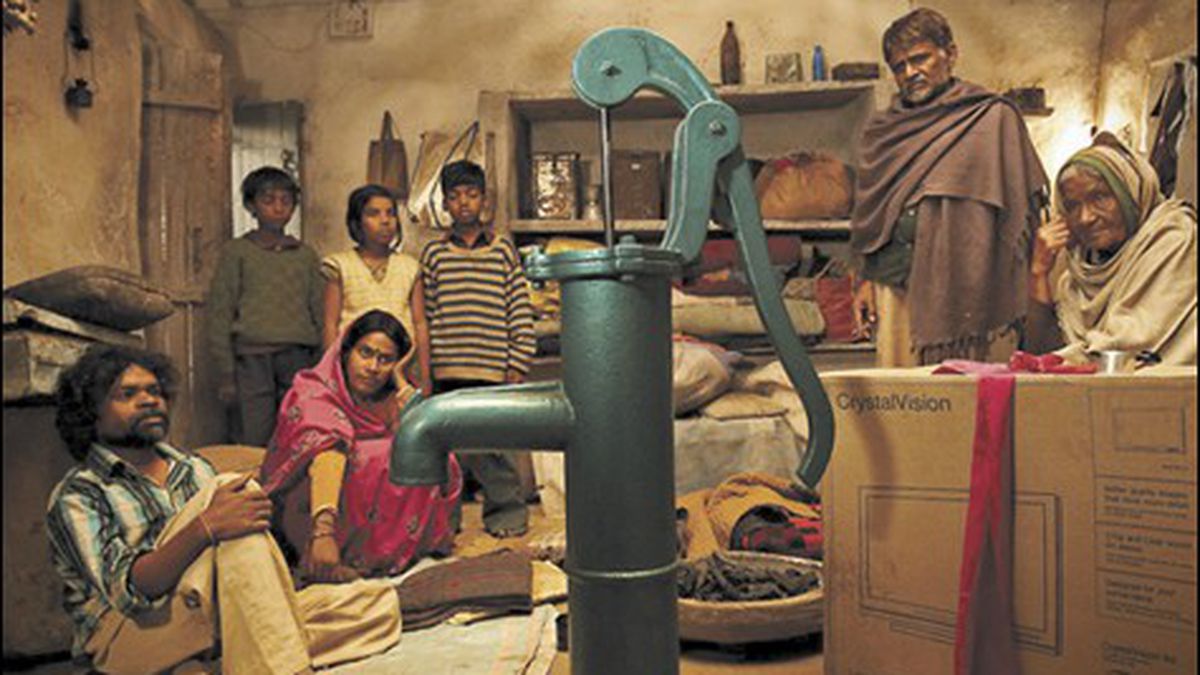 Wretched of the Earth: Peepli Live and Scott Pilgrim vs. the World

What do a pair of poor farmers in India have in common with a young geek in Toronto? How much time have you got?

One quick look at the establishing shots tells us immediately: This is poor land, dry and barren, with barely enough vegetation to graze a goat. So when the camera comes to rest on the figures of Natha (played by non-actor Omkar Das) and his brother Budhia (Bollywood veteran Raghuvir Yadav), a pair of farmers walking down the road with worried looks on their faces, we’re not surprised to find them just as distressed as the landscape.

And yet Anusha Rizvi and Mahmood Farooqui‘s Peepli Live has more on its mind than just the travails of Natha and Budhia, picturesque as they might be. Rizvi and Farooqui’s sly neo-village picture, written by Rizvi and produced by actor-turned-filmmaker Aamir Khan with Kiran Rao for Aamir Khan Productions, certainly identifies with the cash-strapped farmers of India’s Madhya Pradesh state, but sets its satiric sights on targets higher up the food chain in 21st-century India’s consumer society. The further we look up the caste-and-class ladder, the sillier and more ironic the antics.

Like everyone else in the quiet village of Peepli, Natha and Budhia are flat broke. Their fields are producing mostly dust (maybe it’s because the men are content to smoke weed while the women do the field work), they’ve borrowed money from everyone they know, and now, in desperation, the brothers are seriously mulling over a government program that pays a compensation of 100,000 rupees to the families of debt-ridden farmers who commit suicide. If we commit suicide, our money worries end. Suddenly self-sacrifice seems a serviceable option.

It makes no sense for both brothers to do themselves in, so after a bit of nudging it is decided that Natha, the sad-faced one, will do the deed and Budhia will collect the bounty. Natha’s decision may be helped along by a desire to escape his violent, harpy-like wife, who loses no opportunity to upbraid her forlorn husband over his failures.

As a last-ditch gesture, the brothers pay a visit to the village chief Bhai Thakur (Sitaram Panchal from Slumdog Millionaire) to seek relief, but their supplications only meet with ridicule — while his toadies look on derisively, the ogre-like Thakur tells Natha to go ahead and kill himself. Are village officials in rural India really so high-handed, and are their local police really in the habit of beating lower-caste constituents for daring to address them? Be that as it may, the filmmakers present all this as a given, the comic foreground in a wry critique of the “modern, prosperous India” where, according to the dialogue, 70 percent of the population works on farms. Natha and Budhia slink back to their homes and prepare to carry on with the “arranged suicide.” Even Natha’s kids can’t wait for him to die — they’ve already begun spending the anticipated drop-dead money. All seems lost.

And then the national media get hold of the story. Newspapers and TV news anchors outdo themselves to milk the brothers’ pathetic story. An imperious female broadcast reporter arrives in Peepli amid a convoy of SUVs, and politicians (including one played by veteran actor Naseeruddin Shah) jockey for position. The leader of the Backward Castes Party drops in to see Natha and awards him a TV. Among other useless gifts is a bright green hand pump for the well that Natha doesn’t have. Reporters storm the village looking for angles. They’re all waiting for Natha to die. America is blamed, and even Natha’s shit is analyzed on camera for the evening news. Only a television production assistant named Rakesh (actor Nowaz) sees through the furor and recognizes that all the farmers are hurting and that no one wants to talk seriously about it.

It’s easier for Natha to simply disappear than for the power structure to try to deal with a situation in which, according to the film, 182,000 farmers committed suicide between 1997 and 2007. Peepli Live takes a deep look at an everyday tragedy and provides the humorous dimension that underscores the pathos. Who says Bollywood is only interested in lightweight romantic musicals?

It isn’t just that Michael Cera plays young — he’s 22 but looks sixteen. His face has a pallid, just-manufactured, unstamped appearance. In the words of screenwriter Daniel Mainwaring describing a “pod person” in Invasion of the Body Snatchers, “It has all the features but no details, no character, no lines.” It’s easy to label Cera’s look “innocent” because that’s how he has typically been cast. In Superbad, Nick and Norah’s Infinite Playlist, Youth in Revolt, and especially Juno, he played basically the same type: the callow youth with a mild manner who gets the girl because he’s pure of heart.

In Edgar Wright‘s Scott Pilgrim vs. the World, Cera is more of a mooncalf than usual. His character, Scott, a 22-year-old Torontonian who plays bass in a garage band called Sex Bob-Omb, shares an apartment with a gay roommate named Wallace (Kieran Culkin) and dates a seventeen-year-old named Knives Chau (Ellen Wong), although the girl he really desires is Ramona Flowers (Mary Elizabeth Winstead), a cool and stylish number who seems light years older than Scott. To win her, he needs to duel her ex-boyfriends in fantasy sequences based on video games. Oh, great.

That feathery, too-cute scenario (adapted by director Wright with Michael Bacall from graphic novels by Bryan Lee O’Malley) doesn’t hold much interest, but the movie functions quite nicely as a career-progress chart for its would-be post-juvie actors. Cera needs to branch out a bit — maybe play someone truly loathsome, like a Wall Street investment banker. We worry more about 27-year-old Culkin: With his weary, boyish expression, he seems doomed to portray eccentric roommates forever. Ditto Jason Schwartzman (a whopping thirty years old), a bit out of place as Ramona’s most formidable ex. The entire male side of the cast seems a bit stale, in fact. Better to zoom in on Allison Pill as Kim, the band’s red-haired drummer, and Ms. Winstead, the latest Ellen Page/Portia Doubleday/Kat Dennings in Cera’s repertoire of tantalizingly unattainable (until the last reel) females. How will he ever grow up enough to catch up with the likes of them?