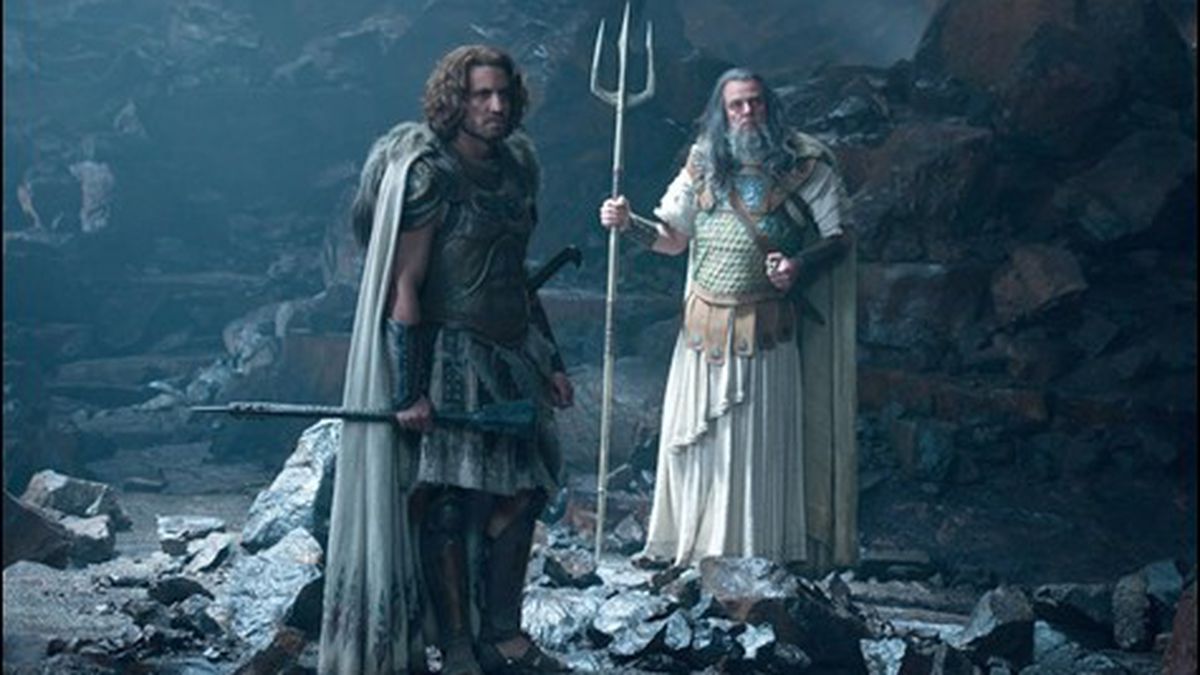 Wrath of the Titans

Fire in the hole.

Junky as it is, Wrath of the Titans is a slight improvement over Clash of the Titans. We realize that’s scant encouragement to the hordes of classical scholars anxiously awaiting director Jonathan Liebesman’s sequel to Louis Leterrier’s risible 2010 remake of the 1981 Ray Harryhausen/Charles Schneer/Desmond Davis ancient-world fantasy — but that’s the way it’s been going in the Greek mythology business lately. The old gods are growing weary. They’re losing their powers and crumbling into dust. Lumbering sequels rule the earth. Previously omnipotent deities have now got exactly one weekend to radiate their magnificence. If they blow it, it’s a quick trip to the underworld.

Liebesman blows it. The director of last year’s Battle: Los Angeles, with a scenario worked on by three writers loosely adapting the original 1981 screenplay, clearly faces a dilemma. On one hand, he’s got a first-rate cast of actors, half of them left over from the earlier Clash. Liam Neeson returns as Zeus, king of the gods, joined by Ralph Fiennes as Hades, aka The Fallen One, lord of the underworld; Danny Huston as the sea god Poseidon; Bill Nighy, in full Monty Python mode as Hephaestus the blacksmith, master of all things metallic; and Édgar Ramírez (from Carlos) as Ares, the appropriately vicious god of war.

Back on earth, chaos reigns. Manly hero Perseus, half-mortal son of Zeus (again played by Sam Worthington), has the job of not only saving the world from the fiery behemoth Kronos and the other Titans, but of rescuing the gods themselves from oblivion. Helping Perseus are his young son Helios (overawed child actor John Bell), the lovely Queen Andromeda (Rosamund Pike), and the comic sidekick Agenor (Toby Kebbell), another Zeus offspring. Zeus really gets around. In addition to Perseus and Agenor, the wise and bearded lightning-bolt-hurler also fathered the demigod Hephaestus — which is interesting because actor Nighy, in the role of Hephaestus, is older than Neeson, who plays his dad. Such are the divine mysteries of Olympus.

On the other hand, there are the crowd-pleasing scary bits. Ranged against the gods and humans are a motley collection of impossible beasties, the 2012 CGI equivalent of stuntmen in rubber monster suits. Kronos lives beneath the earth and is all fire and brimstone. Warriors appear who have two torsos mounted on one pair of legs. Then there’s a rat-tailed, pterodactyl-winged, two-headed, horned, furry creature that snaps a lot.

At least the Kraken is over and done with. Except for a brief flashback to get things rolling, the humongous whatchamacallit, called upon by Zeus to fight the Titans, is only a memory in the sequel. “Release the Kraken!” has to be among the most ridiculous tag lines in the history of movies, right up there with “Make my day” and “Toto too.” Merry pranksters with time on their hands have devoted many YouTube videos to the subject, causing tidal waves of hilarity. Even Laurence Olivier sounded silly saying it, so you know Neeson was doomed from the start. Sad to say, snaky-haired Medusa has also been permanently retired.

So what’s it going to be, gods or monsters? Faced with this dilemma, the director puts his money on the critters. And the movie flows downhill from there, despite some false starts at meaningful dialogue between Zeus and his brother Hades. Their scenes in Tartarus have a distinct Mario Bava feel to them. In between the magic spears and glowing tridents, Freudians could have a field day with the father-son rivalries and overall family strife. Treacherous Hades resents Zeus, but the two brothers make up in order to resist the end of the world. Turns out the immortal king of the gods is somehow nearing retirement age — good thing the lusty Perseus is around to refresh the stock.

Wrath of the Titans is not the sort of movie to pussyfoot around with identity crises and temporality and filial devotion and all that stuff, not when there’s a budget for multitudinous fireballs. The battles are completely forgettable. The 3D has obviously been added at the last minute. The actors, the director, and the crew — with the possible exception of Ramírez and Kebbell, who have something to prove — dash through their motions like they’re late for a doctor’s appointment. As if the Greeks didn’t have enough trouble.

One Blowhard Down, Plenty More to Go