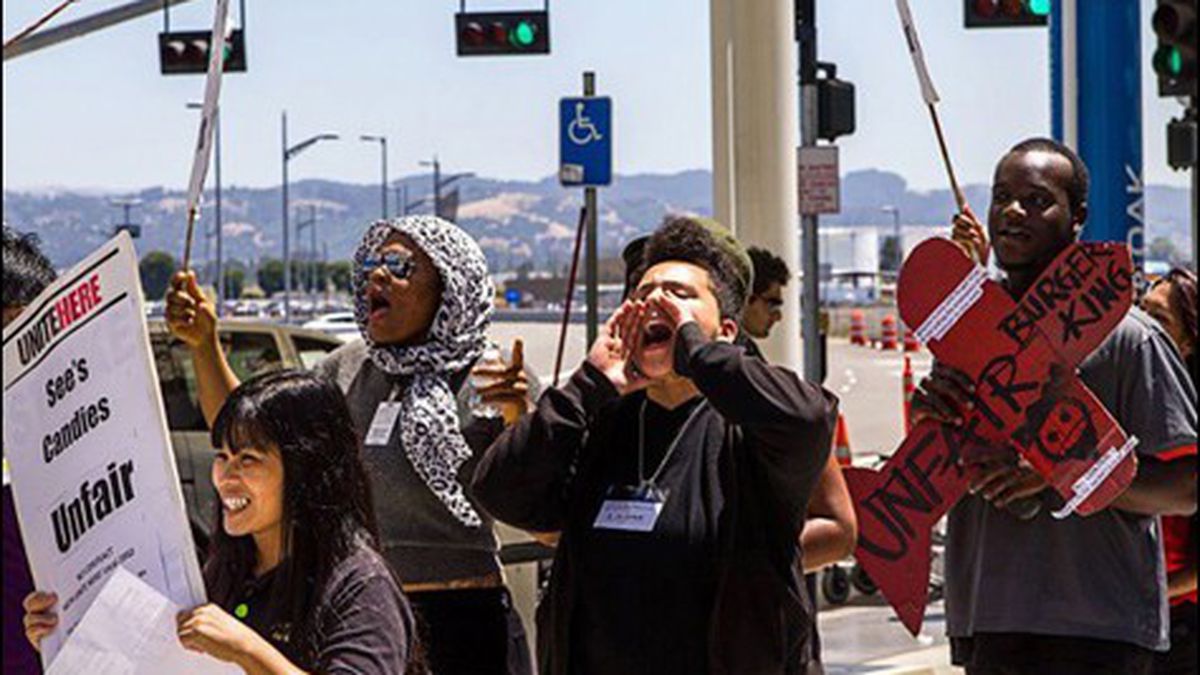 Oakland’s 2002 living wage ordinance had honorable intentions: to provide family-sustaining jobs at the city’s port. Originally it applied only to businesses with twenty or more employees, but the port amended it in 2006 to cover a much broader swath of the maritime and aviation industry — including all businesses run by Oakland Airport’s primary contractor, HMSHost, and any subcontractor that signed a lease after 2006, regardless of size. The idea was not only to make sure a voter-approved ordinance had teeth, but also to ensure that port businesses hewed to the spirit of the law, and not just the letter.

Unfortunately, some businesses don’t share that vision: The operator of a See’s Candies franchise still refuses to abide by the living wage ordinance, citing a loophole that she says grandfathers her in. There is also evidence that a Subway franchise is violating overtime laws by assigning employees to work consecutive shifts at the airport sandwich shop and at a nearby gas station it owns, with no overtime pay. As of two weeks ago, Subway had also fired two of its workers, allegedly for union activity.

In fact, workers have filed a whole litany of complaints against the eight sublessee concessionaires at Oakland International Airport, some of which they expressed during a spirited public comment session at the July 26 Port Commission meeting. Complaints filed with the Division of Labor Standards Enforcement accuse Subway of stiffing workers on overtime and ten-minute breaks, and of circumventing overtime laws by having employees clock in at different Subway locations — i.e., at Oakland Airport and the one on Washington Avenue, which are both owned by Navdeep and Gurinder Grewal. The Grewals referred all questions to their attorney, Michael Foster, who was unavailable for comment.

Some employees also argue that the airport has retaliated against them for union activity: Four incurred written sanctions for using their airport security badges to come in after hours and petition their employers — a right guaranteed to their counterparts at San Francisco International Airport. Some saw their hours cut, even as their employers hired other people to pick up the slack.

“You guys trust us enough to give us airport badges to go past [security gates],” Adrianna Carranza pointed out to port commissioners, arguing that she should have the right to petition her employer at Auntie Anne’s pretzel stand, which is controlled by the same person who operates two See’s Candies stores. Carranza picked up a stack of papers — the same petitions that she and several other workers had distributed in June, declaring their intent to unionize. Her voice rose as she brandished a petition. “It’s not a knife. It’s not scissors. It’s a piece of paper.”

Carranza is paid the $13.45 living wage at Auntie Anne’s, but she wants the right to lobby for better working conditions. So do other members of the eight sublessee concessionaires that are overseen by HMSHost and supposedly subjected to the same rules and regulations as their primary contractor, though workers say those rules aren’t always enforced. HMSHost spokeswoman Sarah Cody declined to comment on allegations waged against these businesses, since they are currently under investigation. She did, however, reiterate that all subcontractors are bound by the terms of the primary lease.

Yet workers insist that many of them are not complying, and unlike the HMSHost-operated concessionaires, these subcontractors don’t offer their employees the protection of a union.

The most glaring case is the airport See’s Candies outlets, which are owned by a company called J.R. Lester & Associates. President and CEO Njambi Mungai, who also operates an Auntie Anne’s franchise at the airport and several other retail outlets in other locations, declined to comment for this article, but employees say she only pays them $9 an hour at both airport See’s Candies. (Auntie Anne’s, which opened in 2007, pays the required $13.45 hourly living wage.) In an email to Wei-Ling Huber, president of UNITE HERE Local 2850, Mungai argued that she should be exempted from the ordinance since she signed the original See’s lease before 2006, and since she employees fewer than twenty personnel at each location.

But union members contend that the number of staff at individual stores is irrelevant; what matters is how many people Mungai employs in aggregate at the airport. As of last month, she had 21 employees there. Under the port’s living wage law, businesses that signed leases at the port before 2006 must pay the living wage if they have more than twenty employees (Mungai’s total Bay Area workforce numbers in the dozens.) UNITE HERE representative Sarah Norr also said Mungai directs many of her staff at Auntie Anne’s to work shifts at See’s, and vice versa. She has three separate subleases with HMSHost, but they’re all under the same company. As such, she’s effectively running multiple franchises as one business, and should be abiding by the living wage ordinance.

Re Bunly, a See’s sales clerk, said she was hired at one of Mungai’s Auntie Anne’s stores in San Francisco, but that after a month and a half of training, Mungai transferred her to the airport and switched her to See’s for the lower wage. She has worked there for more than four years and never gotten a raise. “At the time (she was hired), Auntie Anne’s was paying $11.58 an hour — See’s was $2 and some change less,” Bunly recalled. “I really needed that $11. Nine is not going to help me much.”

Evidently, Mungai isn’t the only subcontractor circumventing wage laws. Navdeep and Gurinder Grewal, owners of the airport Subway franchise, adhere to the living wage, but routinely send employees to work shifts at one of their other businesses, a Chevron gas station on Hegenberger Road. Bikram Thapa, who was fired from Subway on July 19 — right after attending a union rally at the airport — says that the Grewals had him work back-to-back shifts at both businesses for the same hourly wage, as a way to bypass overtime laws. Under the law, hourly employees must be paid overtime for working more than eight hours in a day.

On July 23, Thapa filed a complaint with the National Labor Relations Board against 451 Hegenberger Gas Inc, the Chevron station which, according to state filings, is registered under a different corporate address than the Subway franchise, even though it has the same corporate officers. That suggests the Grewals are trying a gambit similar to Mungai’s — that of running multiple businesses with the same workforce — to dodge overtime laws.

Although Thapa says he was hired at Subway, he was fired from the Chevron in June, allegedly to intimidate him from continuing his union activity at the airport. He was fired from Subway a month later. National Labor Relations Board Deputy Attorney Valerie Hardy-Mahone said she couldn’t comment on the case, since it is currently under investigation.

But other Subway workers corroborate Thapa’s story, and say it reflects their experience as well. Hakima Arhab, a Subway worker who was fired just last week after signing a union petition, said that she also worked consecutive shifts at different Subway locations so that the Grewals wouldn’t have to pay her overtime. Many employees suspect that Arhab’s and Thapa’s firings relate directly to their activity with the union. Hayat Selmani, who currently works at the airport Subway two days a week, says that after she signed a union petition, the Grewals cut her hours in half. “They told me it’s slow, we don’t have any more hours for you,” Arhab said. “But they’re hiring.”

Workers also say they’ve been penalized for using their airport security badges to go in after hours and present fair wage petitions to their employers. Four food service employees received written citations for airport security breaches, stating they had entered the Terminal 2 checkpoint for “unofficial business.” According to one disciplinary letter signed by port aviation security manager Douglas Mansel, an initial violation would remain in the employee’s files for two years, and any subsequent breach could result in permanent suspension of his or her security badge.

That’s tantamount to punishing workers for exercising their right to organize, says Kevin Christensen, a strategic campaigner for the AFL-CIO. “It’s free speech,” he said, noting that, in contrast, San Francisco International Airport has granted its workers permits to leaflet within terminals outside of their regular work hours. “Those workers over there have the right to do exactly what the workers at San Francisco airport did without having to worry about security badge violations.”

In all, UNITE HERE has helped file complaints for eighteen workers at various airport retailers, including Subway, Auntie Anne’s, See’s Candies, Jamba Juice, Burger King, and Otaez restaurant. Most of them alleged their employers had overlooked the twelve paid vacation days they are supposed to grant as part of the living wage ordinance. Some, like Jamba Juice employee Mesha Adams, said they sometimes had to work consecutive four-hour shifts with no break. (Jamba Juice proprietor Joseph Cook declined to comment for this story.) See’s Candies was the only company accused of violating the port’s wage laws.

Port spokeswoman Marilyn Sandifur confirmed that See’s was, indeed, the only existing concessionaire that was grandfathered into the 2006 resolution, though she also said a single company operating multiple concessions should obey the twenty-person rule, regardless of when it opened. “We are actively investigating alleged Living Wage violations by some concessionaires at the airport,” Sandifur wrote in a recent email.

In the meantime, Thapa and Arhab are trying to get their jobs back. “[Gurinder Grewal] told me, ‘Someone else will want to hire you,'” Arhab said, recounting how her boss tried to spin the firing as an opportunity. She stiffened. “I said, ‘No, I want my job — I have a right to keep this job.'”