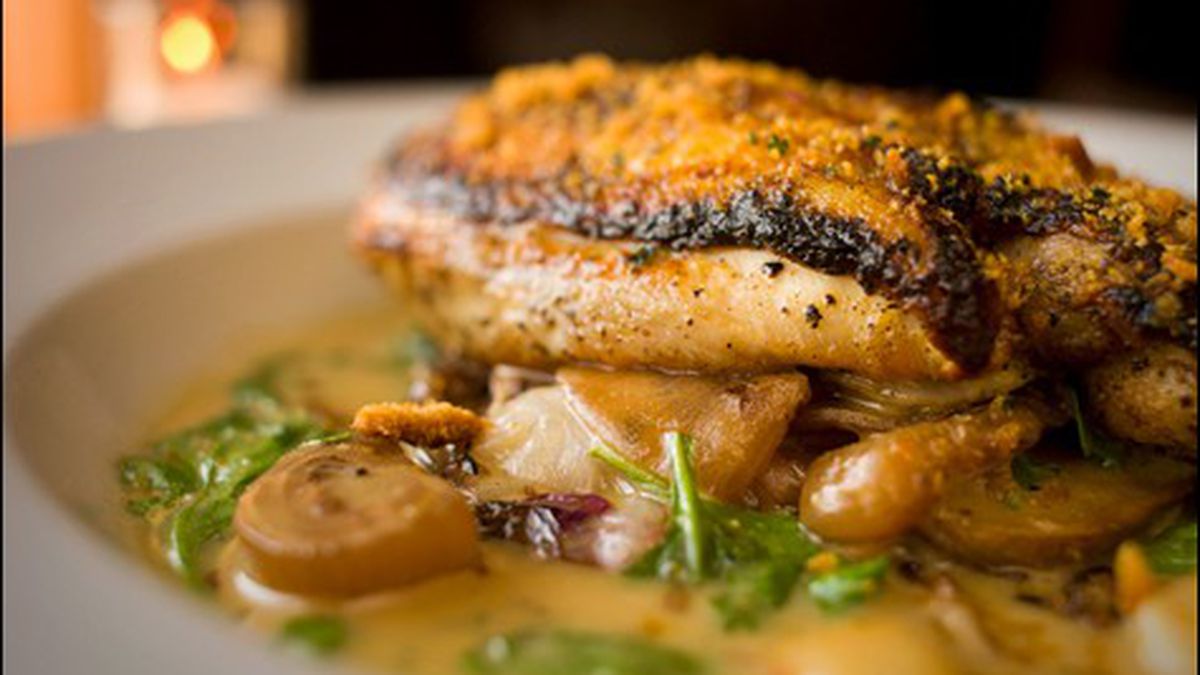 With American Oak, Alameda Gets a Gastropub

If you eat out often enough in the East Bay, it’s easy to start painting different neighborhoods and municipalities with broad strokes: Walnut Creek is strip malls and chain restaurants; the outer edges of Temescal a hotbed for divey ethnic eateries; El Cerrito a great place for offbeat Chinese. Fruitvale is, of course, Fruitvale.

And what about sleepy Alameda, that bastion of quaint Americana and hard-to-find street parking? I ought to know better, but I still mostly think of the island as a place to get above-average Asian food.

Enter American Oak, an unobtrusive whiskey bar on one of the Park Street corridor’s quieter blocks, where Chef Gabe Cortez is slinging cassoulets and wagyu burgers and wood-fired pizzas — fun, approachable gastropub fare that matches, and often outshines, its more acclaimed counterparts in Oakland and across the bay.

Inside, American Oak is set up like an old-fashioned saloon, with high ceilings, well-worn floorboards, and a color scheme that features several shades of brown. Adding to the effect: a disproportionate number of the employees sport scraggly, impressive-looking beards. There are high-top tables in front for bar patrons, but most of the seating is along one wall, tucked under the overhang of an unused balcony section, so you end up feeling like you’re dining in a private little nook. Almost every table has a clear view of the brightly lit open kitchen, where Cortez does his thing.

Until this past January, the place was called BarCeluna and was focused on the world-class collection of whiskeys — well over one hundred of them — that co-owner Melanie Hartman had assembled. Back then, the restaurant was serving tapas, mostly, and it seemed to Hartman that there was a disconnect: It wasn’t food that was meant to go with whiskey. At that point she’d already hired Cortez, who had cut his teeth cooking at Boulevard in San Francisco for five years. His task? To create a new and improved drinking-friendly menu for the restaurant’s relaunch as (the much better-named) American Oak.

Cortez’ menu is a mix of updated American comfort food and French bistro fare — an approach that, in and of itself, isn’t especially original. But what sets the food at American Oak apart is the skillful execution of each dish and a smattering of unexpectedly playful touches.

Take the variety of bar snacks listed on the menu, for example, which are available at a discounted price during Happy Hour, from 5:30 to 6:30 each evening. Deviled Green Eggs and Ham were a fun riff on traditional deviled eggs: a creamy avocado filling for a lighter touch, and sprinkled bits of fried prosciutto to add crunchy-savory depth. And the “chick-a-rones” (fried chicken skin, basically) were pure deep-fried goodness, greasy and addictive. These were served like French fries in a paper cone and came with two dipping sauces: blue cheese and a cayenne hot sauce. Altogether, they made for a thoroughly enjoyable riff on Buffalo chicken wings — with or without a cold beer or a shot of whiskey to chase it down.

When it comes to the main courses, Cortez’ weapon of choice is a wood-burning oven that gets as hot as 900 degrees. Put half a deboned Mary’s Free Range chicken in that oven, skin-down in a cast iron skillet, and the results are magic: skin so crisp that some diners wonder if it’s fried, and meat that’s uniformly juicy and tender. Everything else on the plate is just right, too — radicchio cooked until only a trace of its bitter edge remains, roasted garlic cloves, fingerling potatoes, and a light Dijon jus. Simple as it was, this was as good a chicken dish as I’ve eaten in months.

The oven also allows Cortez to put out a better Napoli-style pizza than anyone is likely to expect from a non-Italian restaurant. During my second visit, I ordered the Margherita, which came out beautifully blistered, dotted with charred bubbles that puffed up here and there. The texture was fantastic. Yes, the crust was dusted with too much flour, and the tomato sauce didn’t quite have the brightness of flavor I was looking for — but these were minor offenses. Whole sprigs of dried oregano, to crush and sprinkle onto the pizza yourself, added a touch of elegance to the presentation.

Finally, lest anyone mistake the food at American Oak for typical pub grub, consider Cortez’ take on “Pork and Beans.” In making a riff on the traditional Spanish white-bean-and-chorizo stew fabada (as opposed to the humdrum American version a cowboy might order in a real old-time saloon), Cortez ups the ante by adding a big hunk of pork belly — as tender and crisp-skinned and full of sticky gelatinous bits as Chinese roast pig. Like many of American Oak’s offerings, this was a hearty, stick-to-your-ribs kind of dish.

Indeed, with all this fatty meat, a salad might be in order. The chopped salad on the menu this month was a classic taste of spring (asparagus, sugar snaps, goat cheese) with two bold additions: toasted sunflower seeds for a nutty crunch and anchovy fillets for an extra savory punch.

For his part, Cortez says it annoys him to no end when people say, “I can’t believe you’re doing this in Alameda.” Even though he’s a “city chef,” if there is such a thing — he lived and cooked in San Francisco for years — Cortez has embraced the small-town charm of his new community. So he uses Alameda vendors whenever he can: a Feel Good Bakery bun for his burger and, for dessert, ice cream from Tucker’s right down the street — on top of a decadent chocolate Belgian waffle, or as part of a classic root beer float.

“We’re doing it in Alameda,” Cortez said. “Alameda could use a good restaurant.”