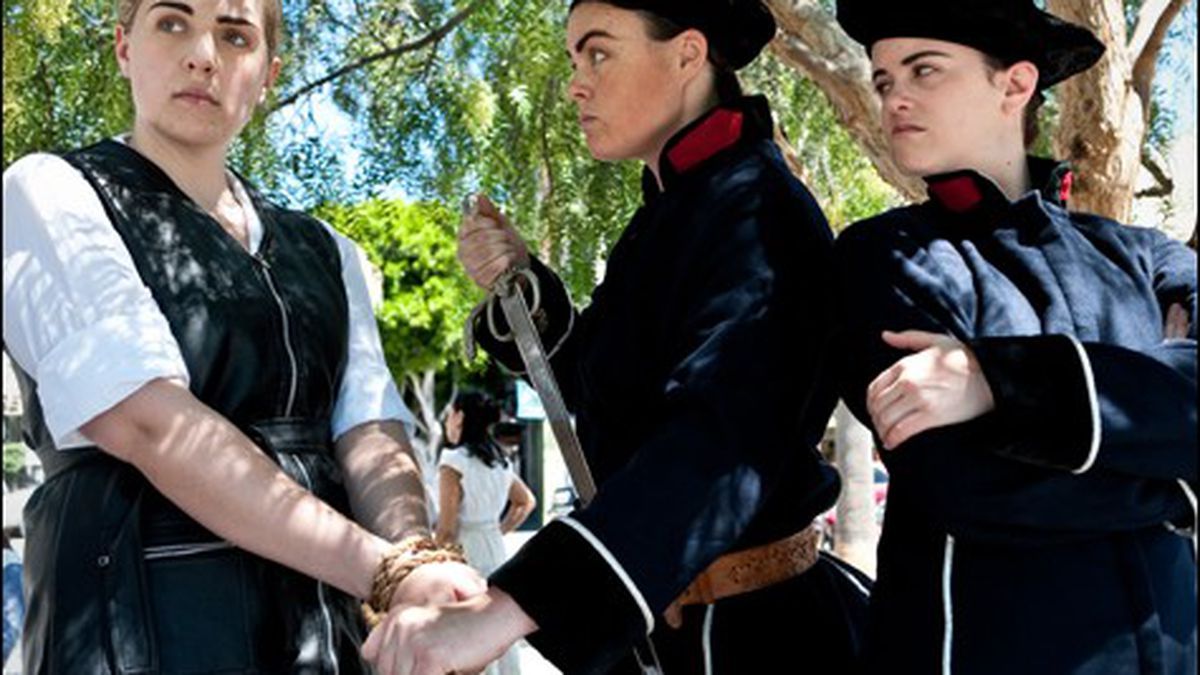 Willful Jest and Much Ado About Nothing

Summer is a season of light-hearted comedies, particularly the ones that start with a spat and end with a shotgun wedding — or two. Such is the template of Much Ado About Nothing, Shakepeare‘s oft-produced comedy about love and war between two couples. It has all the elements of traditional Shakespeare: tempestuous wooing, petty jealousies, deceit, mistaken identity, public shaming, a labyrinthine garden, beguiling language, and enough dick jokes to fill a Judd Apatow film. Thus, it’s appealing source material for Woman’s Will, a local all-female Shakespeare troupe known for its bawdy reinventions of the Elizabethan sausage factory.

And a sausage factory it was, given that 17th-century English laws forbade women from professional acting. Men were burdened with having to play women’s parts in a realistic, nuanced, un-campy way. In Much Ado, the female roles are fairly distinctive. Beatrice (Lauren Spencer) is a spirited, salty noblewoman who pooh-poohs the idea of love and marriage. She eventually gets manipulated into courting her arch-rival, Benedick (Maddox Pratt). Hero (Anees Guillen) is a soft-spoken nymph who catches the eye of Claudio (Elissa Stebbins), an impetuous young soldier. The couples engage in parallel battles of the sexes, which involve a lot of hen-pecking and a lot of jockeying for position. As in other Shakespearian comedies, most of the action takes place outdoors. The timeline is tightly compressed, but the space seems open and free.

Director Lisa Edsall Giglio admits to feeling skeptical when she first got this assignment. Sure, she knows the bard’s work. Still, she thinks of Shakespeare primarily as a tragedian. “We think Shakespeare, we think ‘epic, ghosts, betrayals,'” Giglio said. “It’s like, Much Ado About Nothing? Really?” Yet, as soon as Giglio began assembling the production, she saw how much depth it had. On the surface the play deals with love and its discontents, but peel off one layer and you’ll find a rich thematic subtext. “It speaks about betrayal,” Giglio said. “About the masks we wear. The way we present ourselves to other people.”

The all-female ensemble provided an extra challenge, but it also makes for an interesting suspension of disbelief. To cast the male roles, Giglio sought people who were comfortable shifting their weight, dropping their vocal pitch, and playing with their bodies. She trained her actors to think of their body parts in isolation. You don’t just think of a boy’s walk versus a girl’s walk, she said. You dissect the walk into pieces, figure out how the hips, head, and knees move to create swagger, and decide what that says about gender. “If you don’t look at the parts, it’s hard to create wholes,” Giglio said. She rushed to clarify: “I mean ‘wholes’ with a ‘W.'”

This year, thirteen women will reinterpret a script that was written with four female roles. The set, designed by Kate Jopson, has a garden palette — all blues, browns, greens, and golds — and a façade with elegant Moorish windows. The cast members will sing English madrigals. A few will play guitar. Naturally, language will take precedence over plot, as is the case in any Shakespeare play. And Giglio did nothing to strip this script of its virility. “Yes — when in doubt, it’s a dick joke,” she said. “Just as it was in the 1600s.”

Much Ado About Nothing kicks off at 1 p.m. on Saturday, July 10, in John Hinkel Park (Southampton Ave., Berkeley), and runs through August 29 at several Bay Area venues. Free. WomansWill.org