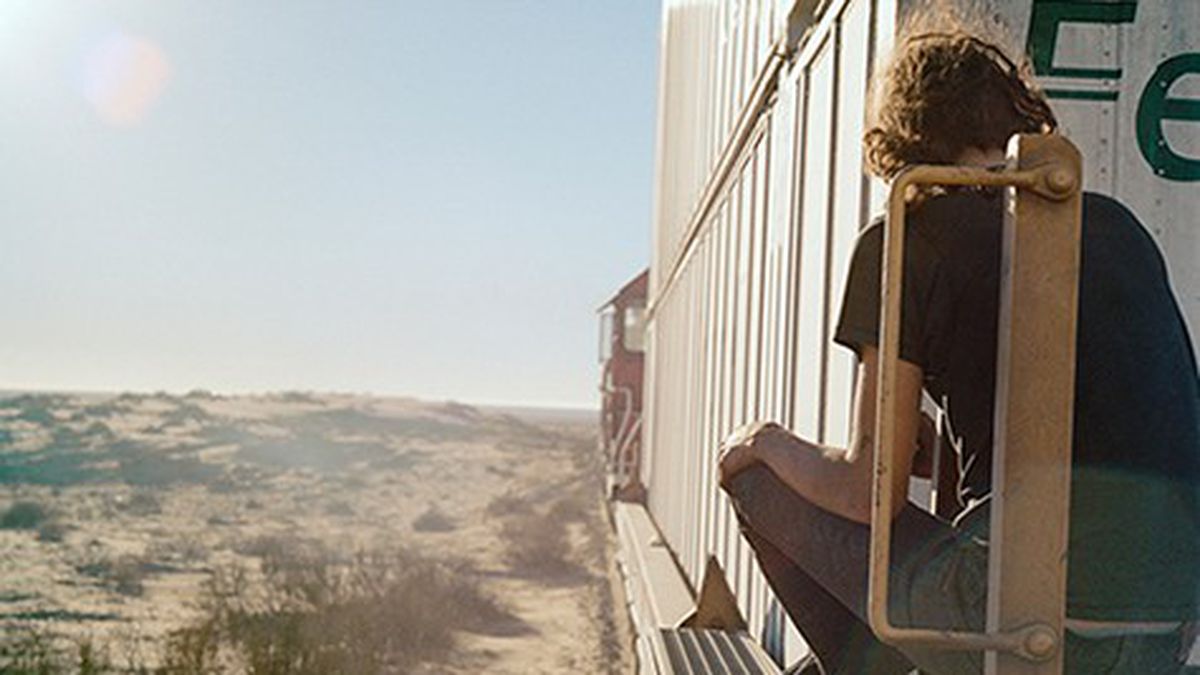 Wild on the Railroad: Swampy’s NBD

In his new book of photography, Oakland artist Swampy chronicles his romance with train-hopping.

The first time that the artist known as Swampy hopped a train, he was eighteen years old, hiding under a bridge in Oregon. “I jumped into a boxcar on a passing train, kinda just slid in headfirst like a Slip N Slide,” he wrote to me recently. “I watched a really amazing storm from the boxcar with both doors wide open. The experience really popped my mind.”

Although that was years ago, it seems that Swampy was never able to shake that aching for freedom from his bones — nor has he ever tried. A fleeting figure, he’s known to most by the markings that he leaves behind, often on the trains he hops. Sometimes that’s a grouchy dog, and other times it’s a crooked arrow slashing through a circle — the secret squatter handshake in the form of a symbol. But most famously, it’s a smirking skull with four curly horns protruding from its sides.

After painting skulls on walls around Oakland (and across the country) for years, Swampy’s symbol is now inked into the skin of many who identify with its aesthetic and accompanying meaning — crust punks and graffiti enthusiasts alike. Swampy’s fan base is rather robust and wide-ranging. The audience at his recent art reception at Chandran Gallery in San Francisco, featuring work from his new book of photography, included high-end art collector types, studded vest and dirty boot types, and all manners of art appreciator in between. Each one had an interest in NBD, Swampy’s new book titled after the hobo shorthand for “north bound.”

Swampy developed his famous skull years ago while he was reading a book about the domestication of humans and animals in various civilizations. He read that if a pig is released back into the wild, it can transition back into a boar within its lifetime, growing dark, bristly hair, and even tusks. “I imagined a human re-wilding, but instead of becoming apelike, it grew tusks and horns,” he recalled. “At the time I started drawing the skull, I was very drawn to the possibilities of a space outside of civilization.”

No finished skulls appear in the pages of NBD, except for a subtle embossing on the front cover, placed directly under a photo of a cave printed on the book jacket, as if hiding in its dark safety. But the book could be thought of as an expanded photo essay that sums up to a synonym for the swampy skull. The crisply printed medium-format photos chronicle the artist’s journey hopping trains (and sometimes barges) up the West Coast, from Mexico to Alaska, with fellow runaways.

The photographs themselves aren’t remarkable in terms of technique, but they’re aesthetically irresistible, presenting a depiction of gritty freedom that’s both visually cinematic and idealistically seductive. In one image, two figures hunch over as if hugging themselves at the edge of a barge looking out at an endless blue ocean. In another, a young man in a denim vest and jeans sleeps in the narrow space between two containers, seemingly rocked to sleep by the rumble of the tracks beneath him. And in another, a friend sits atop a train car waving to passengers seated inside a train headed the opposite direction. It’s clear that the passengers in the last photo are momentarily in transit between two hubs of civilization, but the photographer and his friend are beasts of that in-between, living on the outside of society.

NBD also features a bit of writing. Along with an introduction, there are three small zines bound into its pages, two of which Swampy’s travel companions contributed. Each one offers an extended caption for the chapter of photos that follow it, in the form of recollections and poetry. The descriptions chip away at the romanticization of the train-hopping life that the photographs offer, but never to the point of shattering. The most interesting is the first, written by Vinnie Smith, which describes the contrast between the solitude of train-hopping in the United States and the communal ethos underlying it in Mexico — where they would wake up in the morning to a taco vendor who serves the crowds illegally riding the locomotives.

In his endearing introduction, Swampy describes his own memory of Mexico: A moment playing imaginary baseball with children in a field as he passed by them atop a train — a spark of spontaneity that became one of his fondest experiences. “I swung my imaginary bat and I didn’t really care if I ever rode another train again,” he wrote.