With the help of muralist Luqman Lin, a group of youth in Oakland Chinatown has covered their neighborhood with glistening, golden dragons. 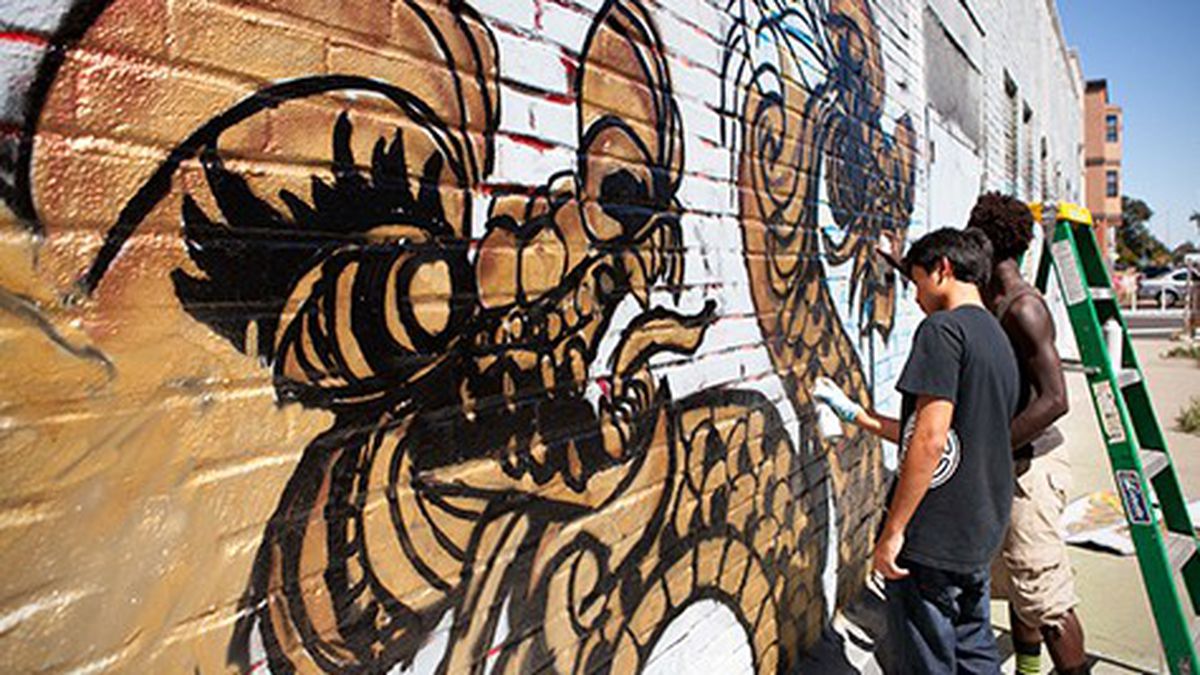 Last week, a handful of young teens — and one mentor— met in an alley on the edge of Oakland Chinatown to spray paint. They worked collaboratively on a golden dragon that gleamed in the sun. Proudly, the youth reported that the traditionally Chinese character was the 71st in its flock. Indeed, in the last few weeks, the prideful, mythical creatures have been cropping up on Oakland Chinatown walls by the dozens.

The first golden dragon was painted at the end of July by Luqman Lin, a traveling street artist who goes by Doctor Dragon. Lin has painted multiple murals in Chinatown, and the neighborhood fits his work, because he often draws inspiration from his Chinese-American heritage. But during his most recent visit to the neighborhood, he decided to create something bigger than a mural — something more like a movement — that could transcend his personal authorship and reflect the Chinatown community in a more collective sense. Although Lin knew his visit was limited, he hoped the project would live on beyond his presence.

Lin came up with “Dragon School,” a grassroots initiative to empower Chinatown youth to enliven their neighborhood by teaching them to paint golden dragons. The goal would be to collectively paint 99 dragons throughout Chinatown, unifying the neighborhood by implementing a recurring visual motif on its urban structure and promoting a sense of civic pride in the youth living there.

The choice to use a golden dragon as the central image was an easy one. In Chinese culture, both dragons and the number nine symbolize luck and prosperity. And when Chinese immigrants first began moving to the United States, there was a legend that the streets were paved with gold, explained Lin in a recent interview. He hoped to bring that legend to life as best he could.

Lin normally takes two to three weeks to paint a wall. But for Dragon School, he needed something faster and easier. So, he devised a large stencil of a dragon head that would allow the kids to fill in the primary shapes in gold. After removing the stencil, they could outline the face in black and take artistic freedom finishing the tail and scales — a relatively simple task.

Next, he asked some students who were playing basketball at the Lincoln Community Center in Chinatown if they wanted to paint with him. Those who joined in quickly told their friends, and within a week, they were all connected in a Facebook group, planning where and when to meet next. Now, there are approximately a dozen youth involved, with a core group of five who are all ninth-grade students at Oakland Charter High School. Because school isn’t yet in session, they have time to paint.

Lin began teaching the youth how to paint during the first week in August, meeting with them every day to conquer new walls. A longtime local business owner named Carl Chan helped to rapidly gain permission from businesses throughout the neighborhood. As the project got started, Lin also struck up a friendship with Anderson Gin, a Chinatown native who has a graphic design studio in the heart of the district. Although Gin typically keeps to himself, he was drawn to the idea of engaging the neighborhood kids, having been one himself years ago. Lin quickly appointed Gin to be the Dragon School principal, and left him during to lead the project during the second week of August, with the goal of 99 dragons three-fourths complete.

Gaining permission to paint on businesses was easy in part because store owners have to paint their facades frequently to get rid of graffiti, or else the city can fine them. And graffiti writers are less likely to paint over a mural than they are to paint a blank wall. But, because Chinatown is such a hub for graffiti, it’s almost inevitable that any mural in the neighborhood will eventually get tagged. In fact, multiple dragons have already been painted on. But Lin and Gin are teaching the kids not to waste time getting upset when it happens. Because everyone in Dragon School knows how to paint the character, lives in the area, and communicates frequently, it’s easy for any member to quickly repair damage. Lin and Gin hope that the school can stay alive, doing repairs and developing new projects, even after the youth hit their 99-dragon goal.

So far, the project has been entirely funded by Lin and donations solicited by a local enthusiast. Recently, Gin and Lin launched a crowdfunding campaign (GoFundMe.com/99Dragons) to raise money for more paint.

That day behind the alley, Gin recalled that Chinatown has changed quite a bit since he was a kid. Over the past decade, it’s become less dense as many residents have migrated to east of the lake, and many once-bustling storefronts have shuttered. “It’s disappointing to see that,” said Gin. “Maybe this will help. I don’t know, but it’s worth a try.”