.Why Gentrification Is Not Inevitable

A new much-publicized report on displacement in Oakland and San Francisco also provides a roadmap for how to stop things from getting worse. 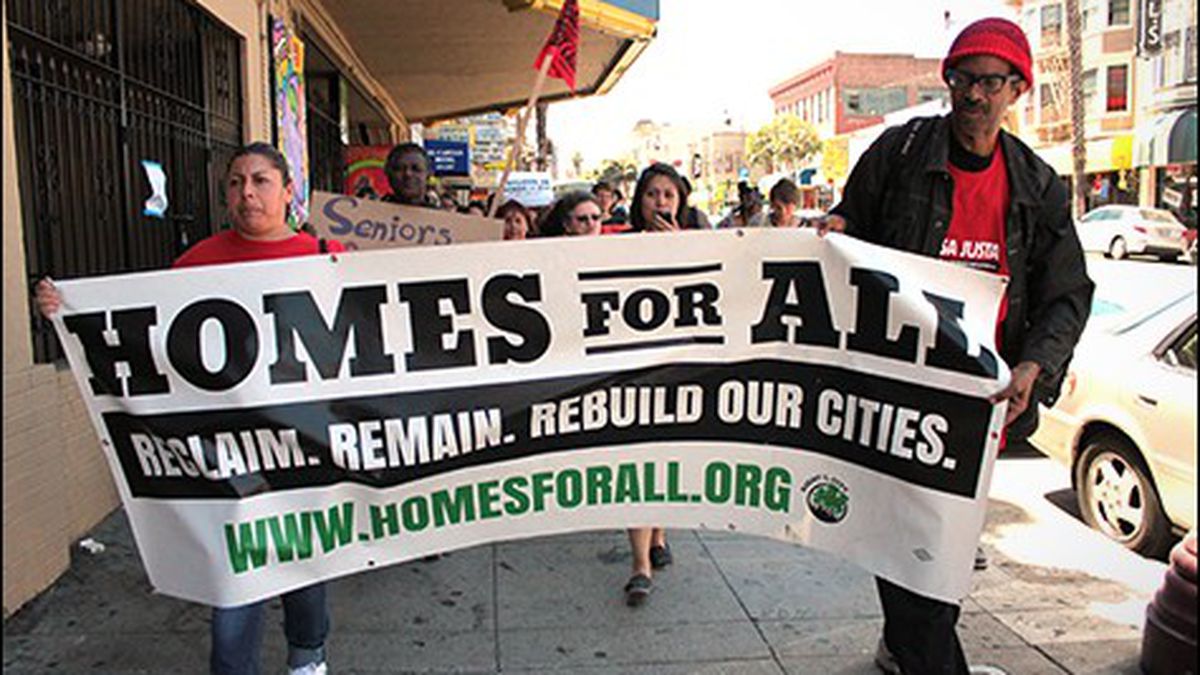 A new comprehensive report on gentrification in Oakland and San Francisco received much attention last week from Bay Area news outlets. But one of aspect of the report — and perhaps the most striking claim in it — went mostly overlooked: the argument that gentrification is not inevitable.

According to the report, “Development Without Displacement,” which was a joint project of the housing-rights organization Causa Justa/Just Cause (CJJC) and the Alameda County Public Health Department, the current trend — rising housing costs pushing lower-income residents out of their communities — can be stopped. The report also presented data showing the recent displacement of working class communities of color in Oakland and San Francisco, along with a summary of research showing the effects of displacement on the lives and health of community residents.

But the report, released April 7 at a standing-room-only event in the Fruitvale Senior Center, is not only a factual document, but also a call to action. It advocates for specific policy changes — and a whole new vision of development. CJJC Program co-director Dawn Phillips said his group is not anti-development. “Residents in deteriorated communities know things have to change,” he said. “The question is, what kind of change?”

When new housing projects come to a neighborhood, “we want the people who live there to benefit from development,” said Dr. Muntu Davis, public health department director. The current process, said Phillips, relies on private capital to drive neighborhood change. Instead, said Zoe Leavitt, health impact assessment coordinator for the public health department, the report’s authors want to make sure that “existing residents drive changes in their own neighborhood.”

A straw poll of the 100-plus people present at the Fruitvale Senior Center event showed that about one-third had experienced displacement. One, Krista Sampson, said rising rents had driven her out of San Francisco to an apartment building in East Oakland, which she rented with the help of a Section 8 federal subsidy. It was difficult to keep traveling back to San Francisco to care for her elderly mother, and her children missed the programs they had been involved in, she said. Her landlord allowed the building to deteriorate so much that eventually Section 8 ended the contract, she added. She described the money, time, and stress in the process, adding that her current West Oakland apartment is so small not all her children can stay with her.

That kind of “serial displacement” is common, Leavitt said, and especially harmful to people’s health. In general, Davis said, gentrification “has serious public health consequences for longtime residents who stay, those forced to leave, and our broader society.” He and Leavitt described the results of research showing that gentrification harms the health of people who live in the area, especially those who are low-income. Rising rents mean people have less money to spend on medicine and food, and can force people to share small living spaces. Services they depend on may be forced out by rising rents. Landlords may let buildings deteriorate to motivate tenants to move.

People pushed out by rising rents, Davis said, also lose their social networks of family and friends as well as community and health services. They often face longer commutes (which is shown to increase stress, not to mention negatively impacting the environment) or may even lose their jobs. Children who have to change schools often fall behind academically and are more likely to get sick. Individuals are more likely to suffer from mental as well as physical health problems. The areas they move to may lack services they depend on, such as health clinics and public transportation.

Data presented in the report show that displacement and its consequences have been most severe for African Americans in both Oakland and San Francisco. One section of the report traces a history of government and corporate actions that repeatedly displaced communities of color. In the last fifty years, those have included the urban renewal programs of the 1960s (a kind of clear-cutting of African-American neighborhoods), redlining (banks’ refusal to lend in certain neighborhoods), and public disinvestment in urban neighborhoods. The North American Free Trade Agreement, starting in 1994, increased poverty in Mexico and forced many people to move north looking for work.

For decades, the loss of manufacturing jobs in the United States has resulted in increased poverty in working-class communities. More recent causes of displacement included predatory mortgages and foreclosures, cuts in federal low-income housing budgets, and now, public financial and policy support for a new wave of development. “Government policies have played a huge role in creating the conditions for gentrification,” said Phillips. “Government policies must be used to push back and make conditions better.”

In all these periods of displacement, the report states, working-class communities of color have lost not only social ties but political power, as political organizations and power blocs were dispersed. The authors of the report see restoring that power as key to preventing the harm caused by displacement. The report recommends that in the future, planners should involve communities where development will occur by conducting outreach and providing training to enable residents to participate fully in the planning process. Public agencies also should support community organizing and the formation of neighborhood councils, and, especially, provide real agency to the community in the decision-making process.

The report also includes many other recommendations — the problem, said Leavitt, is so complex that no one strategy will solve it. Planning for development, the report argues, also should include estimates of its impacts on displacement and public health, and require actions to mitigate these impacts. Cities should protect vulnerable tenants with proactive housing-code enforcement, strong laws against unfair eviction and harassment, and, if they have to move for renovation, compensation for moving costs and a guarantee they can come back when the project is finished.

The report also calls for a citywide strategy to preserve existing affordable housing, including programs to assist low-income homeowners and homebuyers, a commitment that development will result in no net loss of housing for every income level, and regulation of the conversion of rental units to condos. Programs to stabilize communities could include a guarantee that a percentage of homes in new developments will be reserved for neighborhood residents, as well as a program to track public investment at the neighborhood level.

Cities could also explore the creation of affordable housing on a non-market basis, such as community land trusts or housing cooperatives. Finally, the report calls for regional policy and funding support for anti-displacement measures.

The April 7 event ended pep-rally style, with CJJC staffers leading the crowd in shouting their commitment to organize and build the power they need to fight for a more just development process. But before that, members of the audience were invited to share their comments.

“People need to listen to us — the city council, the policymakers — and we need to talk,” said Towanda Sherry, a member of CJJC. “If we don’t speak up, they’ll roll right over us.”