.Why BART’s Wage Offer Doesn’t Include a Raise

The transit agency contends that it has offered employees a generous 10-percent pay bump over four years, but in real dollars, BART workers' wages could actually go down. 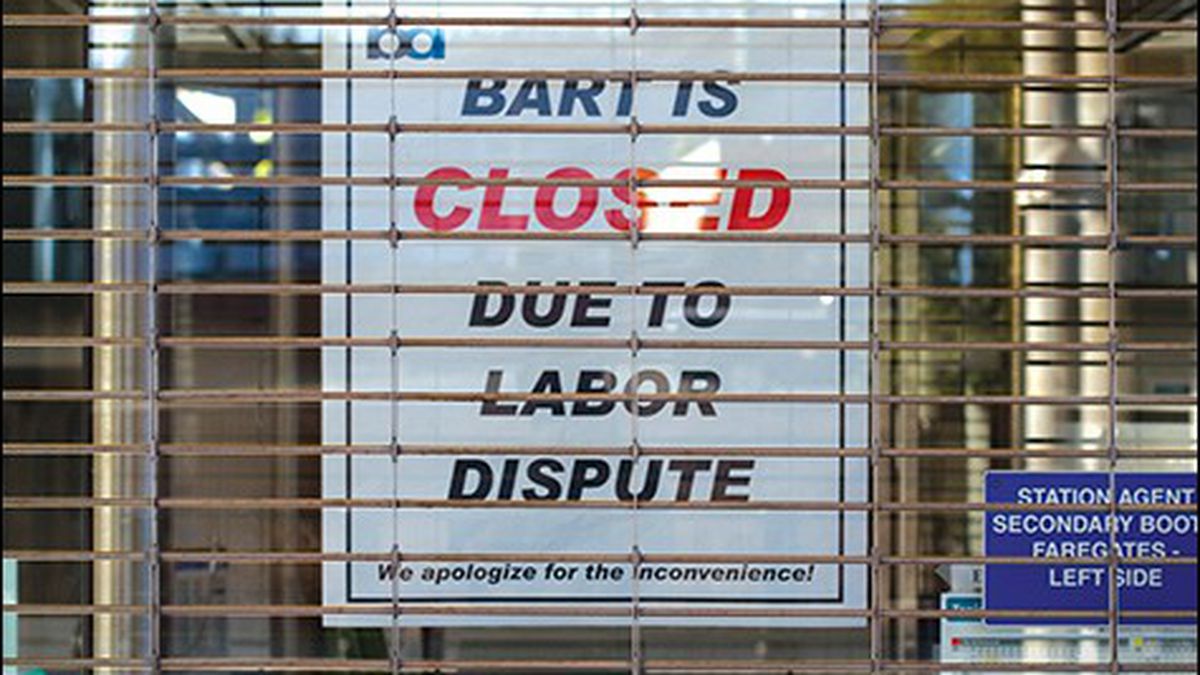 If you’re still trying to understand what exactly BART and its unions are fighting over, you’re not alone. Obviously, the fight is over compensation, but many of us are unclear as to what each party is really asking of the other. Even bargaining representatives on both sides are having a hard time agreeing on the factual differences between their own proposals. Last Wednesday, union and management teams sat down just to clarify some of their financial assumptions — assumptions that have led to multimillion-dollar disagreements over what each side is truly proposing.

So what do the unions want? What does BART want? And why can’t they seem to agree on something in the middle?

Quite simply, it’s the difference between a pay raise and a pay cut. From the very beginning, the unions have demanded a pay increase while BART managers have tried to impose what amounts to a cut in take home pay in order to keep more cash in the system’s coffers. While both sides have moved closer toward a middle ground, they still remain far apart.

To truly understand where each side is, it’s important to fully analyze the proposals, not only in terms of how they’ll affect wages, but also how they’ll impact workers’ retirement and health-care costs.

Let’s start with wages. Throughout the summer, we heard from BART management and the mainstream press that unions were demanding an “unreasonable” 21-percent pay hike over three years, while BART was offering a more realistic 10-percent increase in wages over four years. These two numbers — 21 versus 10 — have dominated the debate so far. “We’ve heard from our employees that they want to see an increase in take home pay in each of the four years, and we have an offer on the table that will do that for them,” said BART president Tom Radulovich at a recent press conference, referring to the agency’s 10-percent wage increase proposal.

But BART’s offer — and much of the news media coverage of it — has routinely omitted one key fact: the cost of inflation. All economists agree it should be never be overlooked when discussing wages. And yet, in this case, inflation has been overlooked, including in most discussions about the unions’ wage request as well. Considering inflation, the two numbers more appropriately discussed are not 21 and 10 but instead 6 and 0.

According to BART spokesman Rick Rice, the agency’s current offer does not include annual cost-of-living increases to account for inflation. But inflation is projected to be about 2.5 percent annually over the next few years, so BART’s offer, when calculated over the four years of the agency’s proposal, could actually net out to zero, or become a wage reduction in terms of the real value of take-home pay. In other words, BART is not actually offering a pay increase.

This fact hasn’t been clear throughout the contract negotiations because neither side has explained how inflation undermines the real value of wages if yearly pay increases amount to less than the inflation rate. The Governor’s Board of Inquiry reported last month that BART management proposed the “elimination” of cost-of-living adjustments in any contract.

“Ten percent over four years is essentially a cost-of-living increase,” said Ken Jacobs of the Center for Labor Research and Education at UC Berkeley, referring to BART’s wage offer. “While nominal wages would rise, real wages would remain flat.”

When analyzing employee compensation, economists always account for inflation. Failing to do so renders an analysis inaccurate. When inflation is properly accounted for — by subtracting it from a proposed “nominal” (face value) increase in wages — you end up with what economists call the “real” wage. It reflects the actual purchasing power a worker has, and determines whether or not he or she can afford housing, transportation, food, and other goods. In the pricey Bay Area, it only makes sense that both sides in the BART contract negotiations should be taking inflation into account.

As such, the unions’ initial wage request was never 21 percent over three years. When adjusting for inflation, it was actually about 12 percent over that time span, or a little less than 4 percent annually.

But there’s another area in which disagreement on the most basic facts and assumptions has made it incredibly hard to understand what’s being proposed from both sides. The unions want a three-year contract and have calculated the costs of their proposal over that time span, while BART management wants to strike a four-year deal. As a result, BART managers have sometimes added the assumed cost of a fourth year to their calculations of the unions’ proposals. Rice responded to the unions’ latest proposal by doing just that: “the District is firm on negotiating a four-year contract,” he said last week, “and if you extrapolate this new proposal over that period this is still a 21.5 percent increase.”

Rice was referring to the unions’ recent decision to drop their request for annual cost-of-living increases from their proposal, thereby moving their wage demands much closer to what BART had been asking for. The unions’ new wage proposal, calls for a 4.5 percent raise every year for three years, totaling 13.5 percent. When accounting for inflation, the proposal only represents a raise of about a 6 percent raise over three years, or 2 percent annually. And when adjusting for other economic factors, it’s actually less than that.

The other economic factors are retirement and health-care costs, which can greatly impact workers’ take-home pay. In the BART negotiations, both sides are proposing to have employees shoulder a bigger proportion of the cost of their pensions and medical care. In fact, when accounting for inflation and increased medical and pension costs, the unions’ proposal works out to a total raise in take-home pay of possibly less than 3 percent. (In truth, it’s nearly impossible to calculate a firm number because the proposals are moving targets at this point.) As for BART’s offer, medical and pension costs could very well result in an effective pay cut for most employees.

One of the most detailed publicly available sources of information about BART’s proposal was provided on August 10 by the transit agency in the form of an “employee impact statement.” BART’s managers crunched the numbers for their proposal to nominally raise wages by 10 percent over four years without cost-of- living adjustments. The agency’s analysis also assumed that employees would pay an increase of 1, 2, 3, and 4 percent, respectively, in pension contributions over each of the four years, and that BART would cap its contributions to specific employee family health insurance plans. That change in medical coverage would force about eight hundred employees to pay more for their health care, according to the August 8 report of the Governor’s Board of Investigation.

According to BART’s analysis of its own proposal, utility workers, who currently take home $36,000 a year on average after taxes, would only see their pay increase to about $39,000 by 2017, after contributions to retirement and medical care are factored in. Train operators, who on average earn $44,000 a year after taxes, would only see their pay increase to $48,000 by 2017. There are about six hundred utility workers and train operators at BART, represented by Service Employees International Union and the Amalgamated Transit Union, respectively. That’s about an 8- to 9-percent increase in take-home pay for utility workers and train operators under the four-year BART contract proposal. But when you factor in an annual inflation rate of 2.5 percent, BART’s offer actually represents a pay cut of 1 to 2 percent over four years.

“I would assume a 2.5 percent inflation rate going forward,” said Jacobs of UC Berkeley. He pointed to US Bureau of Labor Statistics figures that show that the inflation rate in the San Francisco Bay Area was 3 percent in 2012, and 2.4 percent so far in 2013. The most recent data from the California Department of Industrial Relations shows that consumer prices in the Bay Area rose 2.55 percent between June 2012 and June 2013. Long-term data from the California Department of Labor show that, since 1995, inflation has averaged 2.7 percent a year in the Bay Area.