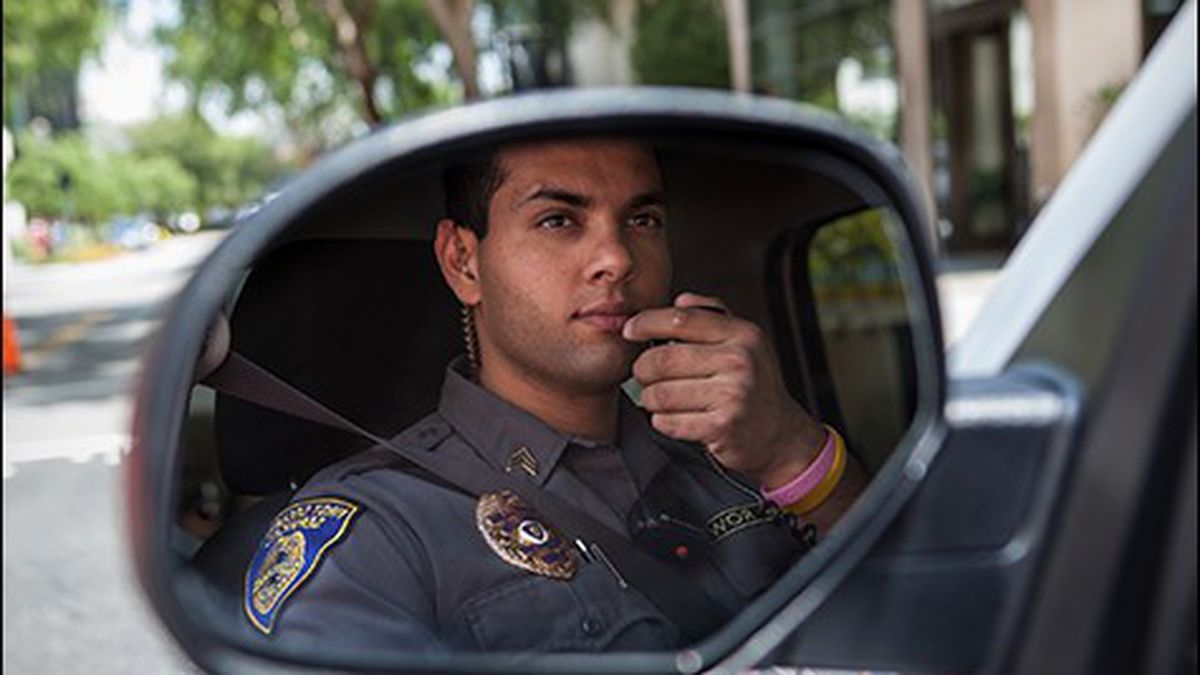 As more Oakland neighborhoods hire private security firms to watch over their streets, some are raising questions about oversight and accountability — especially when officers are armed.

Last week, an older East Oakland couple came home to find that their home had been ripped apart. The bed was knocked over, drawers were wide open, and expensive technology and jewelry with sentimental value were gone. Their back window was smashed and their small dog was terrified.

“They just turned the house upside down,” said Jose Dorado, chairman of the Maxwell Park Neighborhood Council, who visited the house, which is down the street from his home. The family called the cops, but the Oakland Police Department was not the only crime-fighting entity to get involved. Concerned residents made sure that First Alarm Security and Patrol was aware of the situation. First Alarm is one of a handful of private security companies with a growing presence in Oakland — part of a controversial trend that has received national attention in recent weeks. As the city’s police agency struggles to increase the size of its force and continues to devote its limited resources to areas of Oakland with the highest crime rates, some neighborhood groups have taken steps to pay for the added protection of private guards.

“We are hoping with more eyes — trained eyes — on the street, we’ll begin to start picking up patterns of the crime,” said Dorado, who helped organize more than two hundred Maxwell Park residents to pay for First Alarm’s presence in the neighborhood. “We begin to notice these strange cars and suspicious people … that are going around knocking on doors, driving by houses slowly.”

For just $15 a month — or 50 cents a day, as Dorado likes to say — residents get eight-hour patrols on a daily basis. Similar crowd-funded efforts are underway in the Oakmore and Upper Dimond, Rockridge, and Sequoyah Hills neighborhoods, plus elsewhere. The private patrol trend has faced a backlash that’s largely focused on class tensions — with headlines like Gawker’s “Scared Gentrifiers Crowdfunding Money for Their Own Private Cops” — though as the Express has noted, hiring these firms, from a financial standpoint, is cost-effective in areas with enough interested residents. (And it’s worth noting that some of the individuals coordinating these efforts are lifelong residents.)

An overlooked tension in the heated debate, however, centers on a separate controversial question that is all too familiar to Oakland: Is more policing the answer? In the city where unarmed Oscar Grant was shot and killed by a BART cop — and where violent protests erupted after the not-guilty verdict for the neighborhood watchman who shot and killed seventeen-year-old Trayvon Martin — advocates for police reform are raising concerns about the influx of private guards who, by some measures, face less scrutiny and oversight than police.

“Who are they accountable to? Who do they answer to?” asked Jackie Byers, executive director of the Black Organizing Project, an Oakland social justice group that has spoken out about disproportionate arrest rates for black youth. “Even within our public law enforcement agencies, we have a clear lack of accountability, transparency, and oversight. When we start privatizing these things, it becomes even more problematic.”

The fact that some of these guards have guns is especially alarming, she said. “Having a bunch of armed security officers paid for by neighborhood people who are coming from a place of fear — and who are carrying whatever racial and economic biases with them — should make everybody in Oakland afraid.”

In California, private patrol companies and their security guards are regulated by the Bureau of Security and Investigative Services within the Department of Consumer Affairs. To receive licenses, guards must undergo background checks and complete a forty-hour training course and exam, administered by private patrol operators or certified facilities. Operators and managers have several additional requirements, and armed guards must have firearm permits obtained after a fourteen-hour training course. Russ Heimerich, spokesman for consumer affairs, explained that armed guards can only have firearms on them at work, at home, and on the way to and from work. Guards must file reports with the agency when they discharge their weapons, and cases involving injuries or fatalities will face police investigations. “Security guards are not police, and they are trained to observe and report,” he said. “They play a supplemental role.”

But like many bureaucratic licensing processes, “the regulations are not really enforced,” said Julie Al-Huneidi, president and CEO of EduGuard, a Sacramento-based company that offers online training classes for the private security field. “It’s just one of those industries that have never really come under the microscope.” She argued that consumers often have very little information about the companies — and the individual employees — they are bringing into their communities. Heimerich, however, said that checks and balances are in place such that it is unlikely for a working guard to be unlicensed. Regardless, the industry has grown: From 2008 to 2013, there has been a roughly 12 percent increase in the number of private patrol operator licenses in California.

Representatives of the private patrols moving into Oakland argue that they are in no way trying to replace or replicate the work of law enforcement and do not engage in dangerous confrontations. The goal, according to these companies and neighborhood subscribers, is to deter would-be criminals with the mere presence of guards.

“We really want to be a part of your community,” Teresa Huerta Larkin, chief administrative officer and director of legal affairs for First Alarm, told a crowd gathered last week at the monthly Maxwell Park neighborhood meeting. Her employees patrolling Oakland have “defensive weapons,” including chemical agents, batons, and Tasers, she explained to the Express. But no guns.

“What we bring to them is our experience in understanding how crime works,” said Larkin. “Criminals don’t like to be discovered. You make it difficult for them to be under the radar. … We have hardened the target.” Security patrol officers can play close attention to a home when residents are on vacation and can collect and disseminate real-time information to participating homeowners about ongoing criminal activity, she explained.

“We consider ourselves a support mechanism” for police, Larkin added. “We do not cross the line.”

The fact that First Alarm is not bringing firearms to the area was a plus for many residents when the Maxwell Park Neighborhood Council was selecting a company, said Dorado.

“To me, if you have an armed [guard], you are inviting a war zone,” said Tracy Tilin McKendell, a resident who helped bring unarmed guards to her Upper Dimond-Oakmore neighborhood. “We don’t want shootouts.”

Some of the officers of Oakland-based VMA Security Group, however, are armed. VMA has contracts with Sequoyah Hills residents and will soon launch a four-month trial period in Lower Rockridge. In the latter, VMA will not be armed, a very recent change in response to residents’ concerns. In the patrols that do have armed officers, their firearms are “primarily for self-protection,” said Vince Mackey, president and CEO of VMA who served as the director of security and was a bodyguard for former Oakland Mayor Ron Dellums. “They are a defensive last resort. We have no intention of using our weapons as offensive weapons.”

He also doesn’t shy away from concerns surrounding the death of Trayvon Martin, noting that “the very unfortunate incident in Florida certainly makes a lot of people nervous.” But, he said, his officers go through intensive trainings that surpass the state requirements. He also said generally they do not follow suspects. VMA guards, however, may approach or question someone who is acting suspiciously — an individual peeking into mailboxes, for example — and in some cases will “trail” a suspect to get a license plate to pass onto police, he said. Both Mackey and Larkin emphasized that they recruit qualified employees and would never teach or condone any kind of racial profiling. In VMA’s history, Mackey added, there has only been one case of a guard discharging his weapon (at an Oakland nightclub, in which VMA was acting in self-defense and was ultimately cleared of wrongdoing, he said).

In unarmed patrols, VMA guards will scale back some of their response tactics for more risky situations, Mackey said, adding that their presence can still be an effective deterrent. “Since it’s a group effort, we abide by their wishes,” he said, adding, “Weapons and guns still make people nervous.” Justin Horner, a former city council staffer who lives in Rockridge and helped spearhead one of the fundraising initiatives, said he doesn’t expect VMA to function as police, but emphasized that there is no compelling reason to not give private patrols a try. “This is something we can do. Let’s check it out.”

For its part, OPD emphasized that private security is not law enforcement.

“Private patrols — they’re a community decision,” said Paul Figueroa, interim assistant chief of police. “If they want assistance with a private company, that’s totally their decision and I respect their decision to do that. What I can tell you is that cops do make a difference.” He added, “There’s hope on the horizon. We’ve got more officers on the way.”