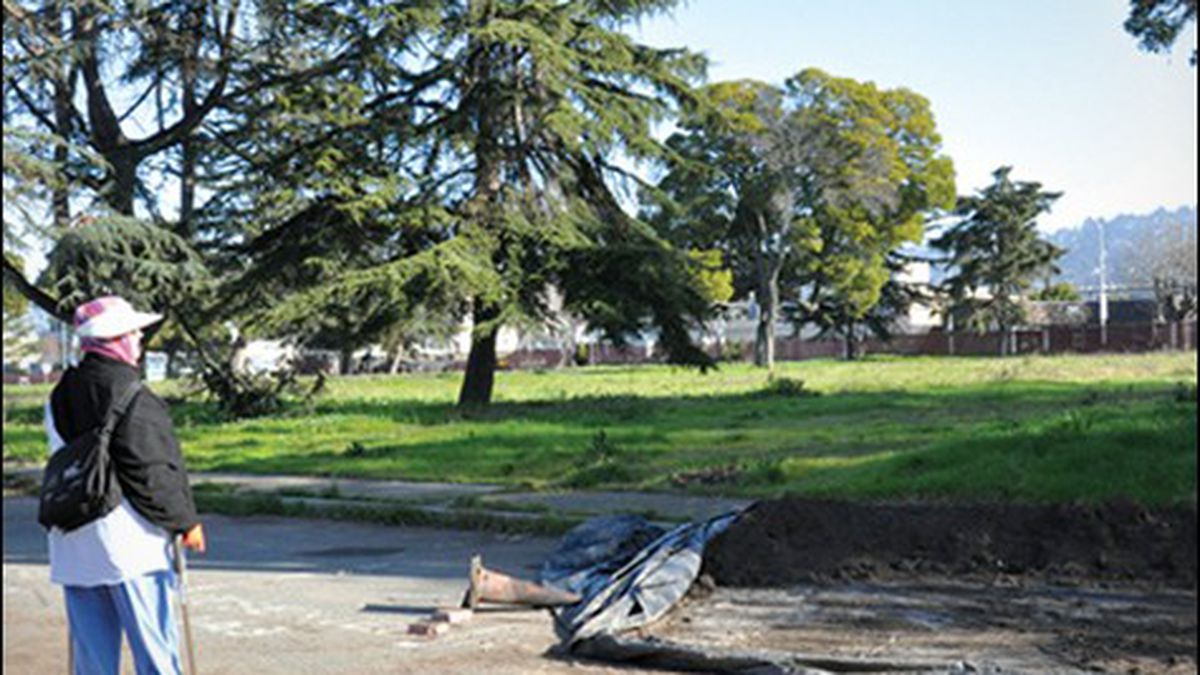 A proposed development on UC Berkeley land in Albany — including a Whole Foods — raises the ire of community members.

A proposed development that would include a Whole Foods mega-store, senior housing, and shops on land owned by UC Berkeley in Albany could be nirvana for the cash-strapped city and for foodies craving organic mango tea or vegan goji berry snacks. But opponents fighting the project just south of Marin and San Pablo avenues call it “myopic.” They say the new businesses would squeeze out established ones and turn open space into concrete — not to mention that the city would effectively roll out a welcome mat for a company that shuns organized labor.

The project, which is likely to go before the planning and zoning commission later this month, would be built on a five-acre parcel just west of San Pablo Avenue, between Codornices and Village creeks. As it’s currently conceived, the site would include a 55,000-square-foot Whole Foods Market on the northern part of the parcel. One-story retail shops are planned along San Pablo Avenue on the southern part and, behind the shops, there would be a five-story complex with retail on the ground floor and a mix of senior-citizen apartments and assisted-living units above. The project was formally introduced in 2008, although the university has planned to develop the site for more than a dozen years.

Realtor and defeated city council candidate Francesco Papalia said moving forward with the development is a “no-brainer.” He pointed out that while neighboring Berkeley is often at odds with the university for occupying former retail sites and taking property off the tax rolls, the opposite would occur in Albany, as the vacant site currently contributes neither property nor sales taxes to the city economy.

Papalia says the project will be the catalyst that transforms the area, with new retail springing up on the east side of San Pablo Avenue. “There will be a there, there,” he said. “All [Albany] real estate values will go up.”

And because Whole Foods is a high-end grocer that attracts a wealthier clientele, Papalia believes it will be a good addition to the city. “High-income people will come here to spend their money,” he said, arguing that if the store isn’t located in Albany, Whole Foods would find a site nearby in El Cerrito, which would exacerbate the trend of dollars fleeing the city.

Kevin Hufferd, director of property development at UC Berkeley, said the project would also help integrate the isolated student community west of San Pablo — University Village has almost 1,000 units of family housing — with the bulk of Albany residents to the east and north, bringing them to shop and to use the pedestrian/bike trails planned alongside both creeks. “The public would be invited — encouraged — to enjoy the trails,” Hufferd said, adding that the university may use some of the revenue from the project to subsidize University Village housing, most of which is just slightly below market rate.

But retired teacher Jackie Hermes-Fletcher bristles when she pictures massive concrete buildings claiming the grassy expanse she calls Albany Meadows. She and her allies want the land turned into a park or urban farm. If retail had to exist on the site, Hermes-Fletcher said she’d prefer something like a small cooperative store. Moreover, she says the increased traffic would not only worsen air quality, but create a danger to children at Ocean View Elementary School on Jackson Street, which drivers would use to get to the site after exiting the freeway at Buchanan Street. She’s also concerned about traffic polluting the city’s only community garden, adjacent to the project site.

To boot, Albany has other parcels available for affordable senior housing, said Hermes-Fletcher. The housing was originally planned as affordable to low- and very low-income seniors, but Hufferd said that plan was scrapped because it’s not feasible to mix affordable and market-rate housing with assisted-living services. “Why would we want senior housing if many seniors cannot afford to live there?” Hermes-Fletcher asked. Another reason Hermes-Fletcher says she dislikes the project is because Whole Foods opposes labor unions at its stores.

Albany’s business community isn’t lining up behind the project, either. “We can’t take care of the businesses we have here,” said Solano Avenue Association Executive Director Allen Cain, calling the city “irresponsible” and “myopic” for considering it. He pointed to the Safeway on Solano Avenue that has been trying to remodel for five years. The city won’t let Safeway upgrade, but is willing to bring in competition, Cain said, adding that the small retail planned for the area will hurt existing businesses on the avenue, where there’s already a high vacancy rate. The city has no cap on the kinds of businesses it brings in, so there could be more of the same — nail businesses, massage parlors, and tattoo parlors, he said, adding, “The landlords will rent to anyone.” Adding to local grocery store competition, new Safeway stores are in the works for El Cerrito and Emeryville.

But Papalia argues that competing retail won’t hurt existing businesses. “Peet’s and Starbucks are both on Solano,” he said. “Who is going out of business? Neither.”

The City of Berkeley’s economic development project coordinator, Dave Fogarty, said the project probably wouldn’t hurt less-pricey grocers such as Berkeley Bowl and Safeway. But he said a new Whole Foods — there’s already one in southeast Berkeley — is more likely to hurt other high-end grocers, particularly Andronico’s. One of Berkeley’s four Andronico’s markets is on Solano Avenue, about ten minutes from the new Whole Foods site. “Andronico’s is rumored not to be doing well,” Fogarty said. “I suspect [Whole Foods] will hurt Andronico’s, but I have not studied it.”

A separate but related issue for opponents of the Whole Foods project involves the Gill Tract, a ten- (some say fourteen-) acre parcel at Marin and San Pablo avenues, north of the proposed project. Portions of the Gill Tract, which is also owned by UC Berkeley, is now used for agricultural experiments by the university’s School of Natural Resources. In the past, the university had proposed relocating playing fields, a community center, and a child-care center from University Village to the Gill Tract.

Mara Duncan, who is among the Albany residents advocating for an urban farm at the Gill Tract, said the university should have spelled out its intentions for that site as part of the planning process for the Whole Foods/housing project. But the university declined to consider the Gill Tract as part of the project, leaving the public in the dark regarding its future uses. Duncan points to a 2003 Albany Unified School District resolution urging the university to “Preserve the agricultural use of the Gill Tract and work with interested organizations to initiate [a] visionary and viable working farm/ecopark open to Albany students and the public ….”

When the zoning commission looks at the project later this month, it will consider allowing a five-story building where the current height limit is about three stories, and expanding commercial zoning to permit retail use on the entire site. The commission will make recommendations to the city council on these questions and, eventually, on whether it should approve the final environmental impact report, which includes remediation for problems created by the project, such as increased traffic. The university must also win approval of the building design before it brings in the backhoes. The project could be built in phases, according to Jeff Bonds, Albany’s planning and building manager. The university will still own the property, but could eventually sell all or part of it. City officials can’t talk publicly about the project until it comes to them in public meetings.

In the meantime, project opponents say they will lobby public officials to reject the project or approve a smaller one. “I hope the city council will step up to the plate and lead the city, and not buy into this money thing,” Duncan said.