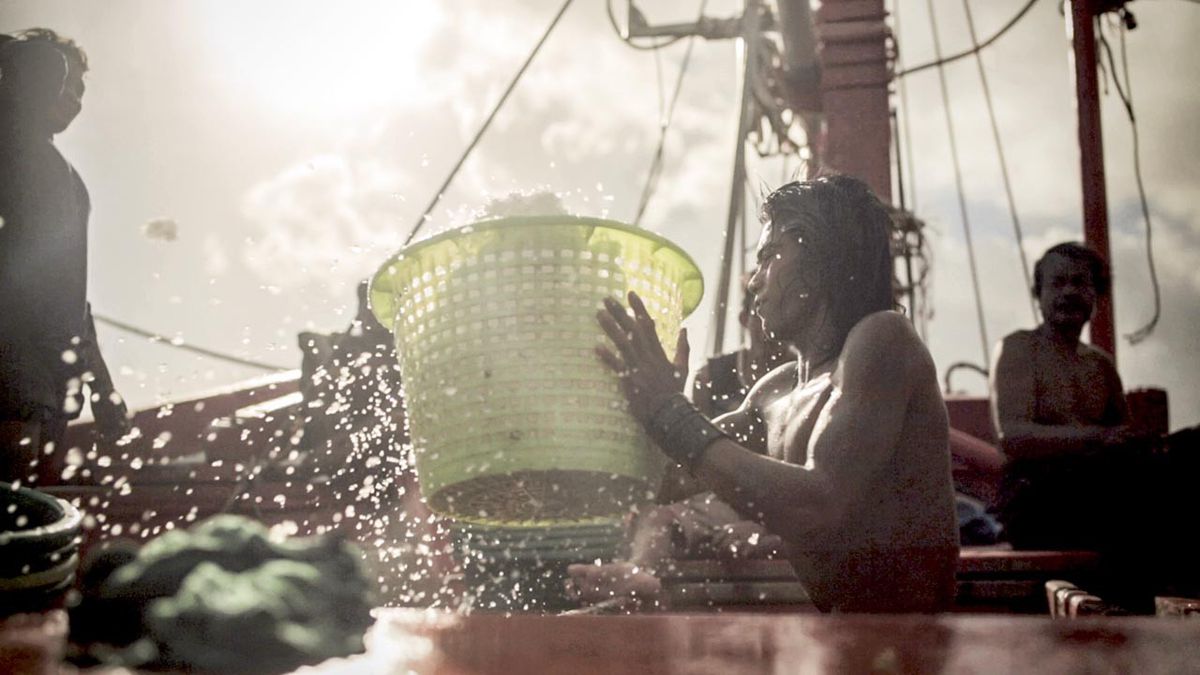 Who Caught Your Dinner?

Eye-opening Ghost Fleet gives us something new to feel guilty about.

Earlier this month, a report from the National Academy of Sciences warned that the world’s oceans could lose almost 17 percent of their fish and marine life by the year 2100, due to climate change. Against that background, the new documentary Ghost Fleet assumes a double helping of irony before anybody has even seen it.

The American-produced documentary, directed by Shannon Service and Jeffrey Waldron, outlines the plight of enslaved fishermen, shanghaied into a lifetime of work by companies trying to satisfy the increasing demand for a steadily diminishing natural resource. So in essence, slave labor is being used to help deplete the supply of one of Earth’s most important food sources, to satisfy the appetite of customers who may not know or care where their grilled ahi is coming from.

Thai activist Patima Tungpuchayakul, co-founder of the Labor Rights Promotion Network Foundation (LPN), sees the dilemma as a human rights issue. Thai waters are running out of fish to satisfy the enormous market for seafood, and local fishermen balk at the long sea voyages required to find their catch, so the Thai seafood industry (a $9 billion proposition) resorts to extreme measures to recruit workers. Enter human traffickers and locked-down workplaces.

In Bangkok, for instance, one man went out with a woman he had just met, and woke up on a fishing vessel at sea. Suddenly “I was owned,” he says, like others forced to work around the clock, without pay and under brutal conditions, on voyages that can last for years at a time. According to LPN, tens of thousands of men from Thailand, Burma, and Cambodia have been enslaved in that manner. Patima has made it her mission to locate and mediate for the missing men, whose faces when she finds them often remind her of ghosts. It’s dangerous work; a labor activist could be killed for interfering in a profitable business.

The camera follows Patima and her team as they interview forced laborers in Indonesia, and the scenes of them making videos to be shown to their families back home are heartbreaking. Some of the men are missing fingers, limbs, and eyes, and many have given up hope of ever seeing their homes again. Eyewitness tales abound of company prisons, torture, and runaway slaves. We also learn there are reports of forced labor on boats from Taiwan, the U.K., and the U.S. And yet Patima successfully brings back a handful of “ghosts” to their families. She is a kind of secular saint, and Ghost Fleet is an important document to remember the next time you sit down to a seafood meal.&#8;

OP-ED: Why We Need to Encourage More Young People of Color...

Retail of the Future Will Be All About the Experience