Coronavirus Journal: Despite official guidance and the chance to visibly disagree with President Trump, most East Bay residents seem to be ignoring recommendation. 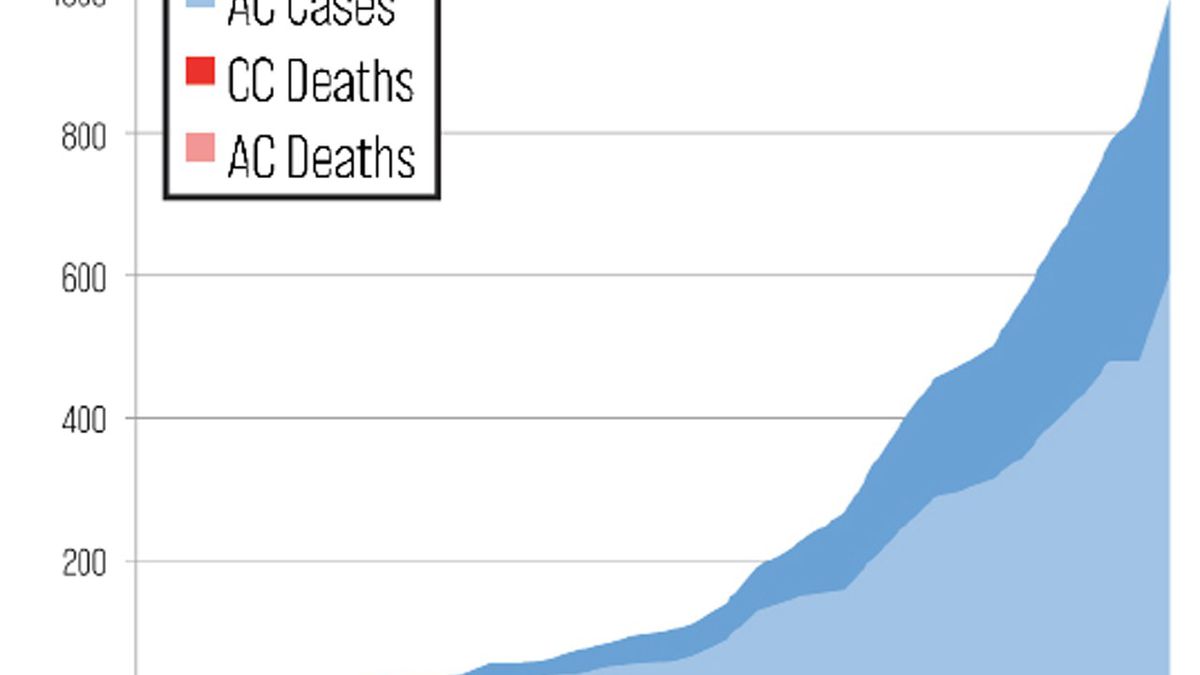 California’s public health officials are now suggesting that people use cloth face coverings when they leave home to conduct essential activities. The state-issued guidance does not mandate face coverings and is no substitute for social distancing and handwashing, but officials say some barrier is better than none.

Sadly, the suggestion is currently being ignored by most people out on the streets of Oakland and elsewhere in the East Bay. Many people waiting in shopping lines, walking their dogs, or otherwise exercising are ignoring this guidance — just like President Trump, whose refusal to wear a mask contradicts the advice of his own health experts.

“Wearing a cloth face covering could provide some additional benefit by acting as a reminder for other people to keep their distance,” California Department of Public Health Director Dr. Sonia Angell said, “and it could help reduce the spread of infectious particles from those who could be infected but don’t have symptoms.”

The state is not recommending use of N-95 masks, however, since first responders face a shortage of personal protective equipment.

In California, health-care professionals, medical retirees, behavioral health scientists, pharmacists, first responders, administrative assistants and nursing students are all urged to sign up for the California Health Corps to fight in the front lines of this pandemic.

Visit HealthCorps.ca.gov for more information about the initiative, which comes as Gov. Gavin Newsom signed an executive order that temporarily expands the healthcare workforce to add another 50,000 hospital beds to treat COVID-19 patients. To learn about more ways to support the fight against the coronavirus, check out serve.ca.gov or visit covid19.ca.gov.

Hayward city officials reported Wednesday that the first week of free COVID-19 testing found 130 new cases of the virus. The site located at the Hayward Fire Station on Huntwood Avenue tested 1,254 people in its first week. The rate of infection among those tested in 10 percent.

The Hayward testing site, funded by the Hayward Fire Department and the city, is open to all, and without a doctor’s referral. However, those who are symptomatic for the virus will only be tested. The site is open from Tuesday through Sunday, 9 a.m. to 6 p.m. or whenever the number of test kits are exhausted.

The Eden Health District Board of Directors agreed to help fund three proposed COVID-19 mobile testing sites in Alameda County. Following the lead of the Hayward Fire Department’s free testing site, the district allocated another $250,000 toward the total costs of covid-19 testing.

Among the possible locations are Eastmont Mall in Oakland, San Leandro Hospital, the parking lot at St. Rose Hospital in Hayward, and the Tiburcio Vasquez Health Center in Hayward.

Alameda County is expected to ultimately foot the bill for two-thirds of the entire funding of the sites, which would provide 10,000 tests among the three sites over 20 days, Eden Health District officials said.

Alameda County homeowners are aware the deadline for their second installment of property taxes is coming soon. But with the COVID-19 outbreak and resulting economic tailspin hitting the region and country, the Alameda County treasurer/tax collector announced that penalties for delinquent property tax payments can be waived.

“The taxpayers will need to submit the appeal form and to sign a statement, under penalties of perjury, to represent that they were unable to pay on time for reasons related to the impacts of the corona virus from “reasonable cause and circumstances beyond the taxpayer’s control” under current state law,” the treasurer-tax collector’s office said.

Similar to the list of impacts resulting from the coronavirus that were laid out in the county’s recently approved moratorium on evictions, they include, documentation showing the resident’s inability to pay their property taxes because of illness, unemployment, and loss of income due to the coronavirus.

Stock It To Me

A couple of teenagers spent their spring break building a website — InStok.org — that helps people find out what’s in stock at their local stores.

“When we came back from college, we realized that our parents were really struggling to find some grocery items,” 19-year-old Rithwik Pattikonda, a sophomore at the University of Texas at Austin, told ABC News, in an interview about the startup. “When we saw the news, we realized that the issue was much more widespread.”

Pattikonda teamed up with his friend Darshan Bhatta, an 18-year-old freshman and fellow computer science major at the same university, to develop the site, which has since garnered national news coverage and spared an untold number of families from making unnecessary trips to the grocery store.

Using the website, you can learn that the Walgreens on Lakeshore Ave. in Oakland has Complete Home Bath Tissue Mega Rolls, but Scott or Charmin.

Just four months into the pandemic, and the novel coronavirus is officially the third leading cause of death in the country, according to statistics from the U.S. Centers for Disease Control (CDC) and Prevention. Only heart disease and cancer claim more lives each day, and that should change soon. … A new study shows that California’s traffic collisions have fallen by half since Gov. Gavin Newsom issued the statewide stay-at-home order on March 19. …

A recent meeting of the Santa Clara Valley Transportation Authority (VTA) board meeting was crashed by so-called “Zoom bombers,” hackers who yelled the N-word, projected a swastika and flashed pornographic images onto the screen. As the outbreak spreads across the country, schools and government agencies alike have taken meetings online using videoconferencing software from San Jose-based Zoom. But while the technology allows government agencies to abide by open-meeting laws while practicing social distancing, there have been concerns about “Zoom bombers” disrupting meetings. During public comment at the VTA board meeting, multiple people started yelling the N-word over the video chat. One of the Zoom bombers plastered a Nazi flag on the screen while another played a clip featuring graphic nudity. Another screamed “let me see your p*ssy” before the VTA cut the audio and kicked out the intruders.

Next ArticleEast Bay Guide to Sheltering in Place