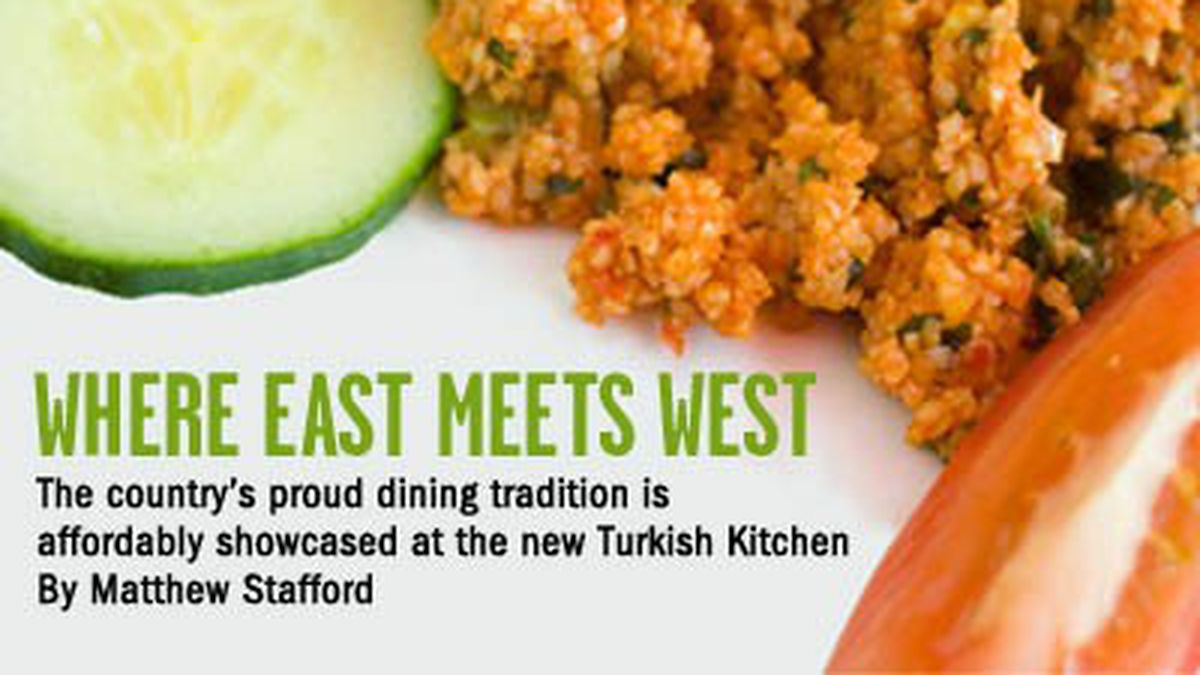 The country's proud dining tradition is affordably showcased at the new Turkish Kitchen.

In these exciting times of economic downturn and minimal cash flow, finding a restaurant that serves good, cheap, substantial food is more crucial than ever, especially here in the affluent-but-pricey Bay Area. This also is a place where foodies from around the globe tend to gravitate, resulting in a regional smorgasbord of multicultural noshes that are often every bit as affordable as they are tasty.

Enter Turkish Kitchen, a six-month-old storefront operation a block or so from the Cal campus. Here student and stockbroker alike can fill their bellies with specialties out of the Ottoman playbook at prices that rarely exceed the reasonable. The setting is bright, airy, and cheerful, with colorful murals covering the walls and ceiling, a bustling open kitchen and affable service setting the mood. And while the house cuisine can be erratic in quality, as often as not it is worthy of the proud Turkish dining tradition.

Although Turkish food shares certain characteristics with other Eastern Mediterranean/Persian Gulf cooking traditions — skewered meats, stuffed grape leaves, a preponderance of yogurt, eggplant, and anise — it is generally considered the most dreamily delicious of all Middle Eastern cuisines. One reason may be the country’s longtime status as the gateway between East and West (Europe and Asia meet within its borders) and the culinary intermingling that’s such a rich aspect of its history. Another might be its tradition of opulent dining, or its enviable location between the Black, Aegean, and Mediterranean seas. In any case, an evening of Turkish cookery is an evening worth anticipating.

Start with red lentil soup, a creamy, bisque-like bowl of comfort food in which carrots, potatoes, onions, and spices add a lush, earthy-sweet dimension to the rustic classic. Another piping-hot meal-opener, ispanakli borek, packs a turnover of flaky phyllo dough with plenty of melted feta and a hint of spinach; the result is a dense, delectable Middle Eastern variation on the grilled cheese sandwich. But it’s the kitchen’s cold appetizer selection that’s especially toothsome. Top of the menu is the eggplant salad, a light, tangy celebration of the versatile aubergine jazzed with peppers, onion, lemon juice, and a touch of olive oil. Equally yummy is the house baba ghanoush, in which the eggplant is grilled, pureed, and combined with garlic, yogurt, and tahini: a smoky treat. The stuffed grape leaves aren’t much better than what you’d find in any deli case, but the satin-textured hummus is a lusty delight, the kisir actually makes bulgur palatable, and the ezme (a salsa-like mixture of tomatoes, parsley, and roasted peppers) delivers a palate-cleansing afterkick. They’re delicious with the house-baked bread, a dense, chewy quasi-focaccia asprinkle with sesame seeds.

Some of the entrées aren’t as successful as the appetizers. The falafel — ground garbanzos formed into globes and deep fried — are heavy, dried out, and largely flavorless. Manti, the Turkish version of stuffed meat dumplings, are likewise bland and densely textured, with hardly any spiced lamb (or mint or sumac) to recommend them. But the marinated, grilled chicken shish kebab is wonderfully moist, smoky, and tender, and the Turkish moussaka — a hearty, down-home version of the Greek standby brimming with ground beef, sliced potatoes, and eggplant — is as comforting as a slab of lasagna or a good shepherd’s pie. Turkish Kitchen also bakes eight savory pies, actually large turnovers (not unlike calzones) filled with chicken or sausage or spinach or cheese or potatoes; the kavurmali features tender chunks of lamb and fresh, al dente vegetables.

The only dessert worth ordering is the baklava, which, as it turns out, is the best baklava we have ever tasted. Unlike the pasty, tinder-dry renditions that have become the general standard, Turkish Kitchen’s baklava is moist, almost creamy, sweet syrup suffusing its buttery layers of phyllo and pistachio, its gooey magnificence best tackled with knife and fork. On the other hand, the sutlac is a bland, overly sweet attempt at rice pudding, the flan is nothing special, the is a dried-out haystack of shredded phyllo, and the kunefe is a heavy, oily platter of kadayif, cheese, and syrup.

The 16-item wine list is brief and easy on the wallet ($14-$22/bottle), with two Turkish wines (Cankaya and Yakut) tucked among the locally vintnered cabs, merlots, and chardonnays. Twelve are available by the glass. Or opt for ayran, a tart, refreshing glass of cucumber-scented yogurt diluted to the drinkable stage, or, even better, a slug of Turkish coffee. Turkey introduced the beverage to Europe in the 16th century, and the Turkish method of brewing and drinking the stuff is coffee at its most essential. Rapidly boiling water is mixed with very finely ground coffee and served, grounds and all, with lots of sugar in a tiny demitasse. The result is a thick, syrupy couple of ounces of concentrated, jet-black, bittersweet caffeine a few steps beyond the most intense espresso.

Vegetarians will find plenty to enjoy at Turkish Kitchen. Meat-free starters include the lentil soup, three salads, two feta-filled phyllo pastries, and all of the cold appetizers (stuffed grape leaves, eggplant salad, baba ghanoush, hummus, kisir, ezme, and two yogurt concoctions). Three of the savory pies — cheese, spinach-cheese, and potato-cheese — are vegetarian-friendly as well; other entrée options include stuffed eggplant and the falafel.

Chef Mehmet Vural, formerly of San Francisco’s acclaimed A La Turca restaurant (whose owner, George Baylar, is one of Turkish Kitchen’s co-owners), brings a wealth of experience to his new venture, where everything — the pastries, the breads, even the yogurt — is prepared from scratch. “It’s all made fresh,” says co-owner and Istanbul native Ferzan Yolcu, a fellow A La Turca vet who manages the front of the house. “That’s why people like to come here. We serve food that’s fresh, good, and inexpensive too.”

What more could a hungry Bay Area ask for?