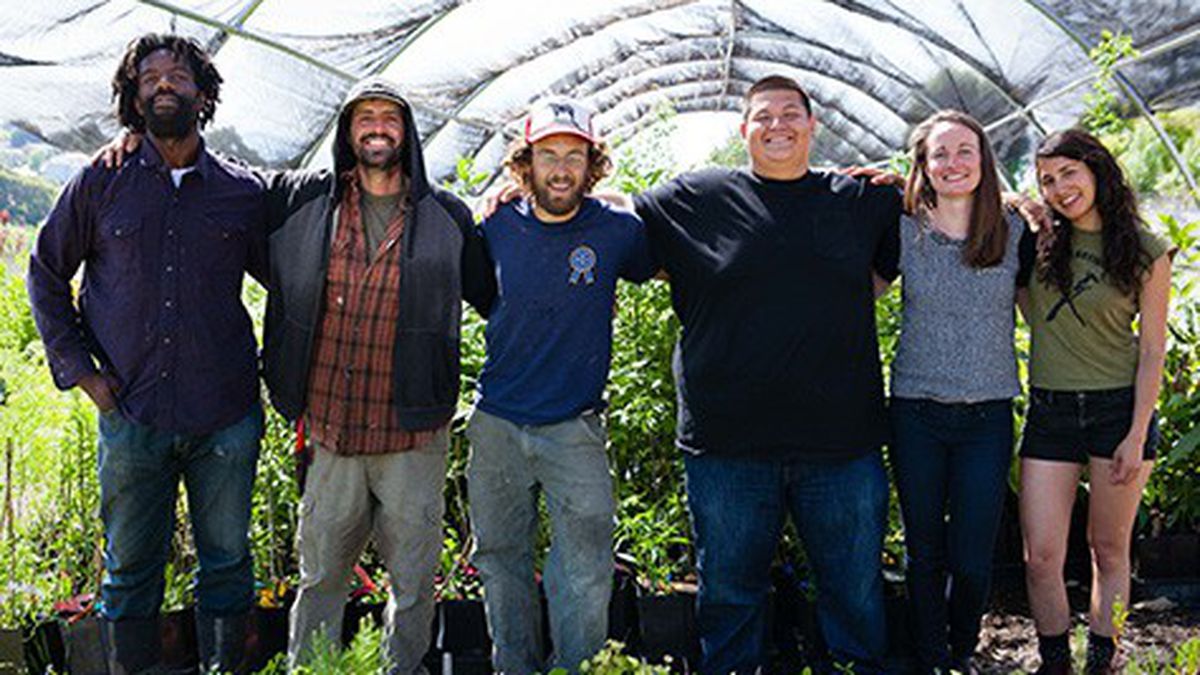 In last year’s Sustainable Living issue, the Express published a story about Planting Justice, a local nonprofit that advances food sovereignty and combats the prison industrial complex. Since 2009, Planting Justice has been running a program called Transform Your Yard, which employs formerly incarcerated individuals at a living wage to build gardens in backyards all over the Bay Area. The profits from this blooming business are then used to build free gardens around the homes of people who have limited access to fresh, healthy produce. Planting Justice also has an educational branch that operates in schools and jails all over the region — many of which also have urban gardens at their sites. The programs — which also employ formerly incarcerated individuals — teach gardening skills through a curriculum focused on food sovereignty and emphasizes the ways that food has played a role in social justice movements (i.e. The Black Panthers’ Free Breakfast Program).

At the time of our first story, Planting Justice had just secured a ten-acre plot of land in El Sobrante, an unincorporated community in Contra Costa County east of Richmond. The land was to be used as a working farm to grow organic produce, some of which would be sold through a CSA program, and some of which would be freely distributed or sold at a sliding scale to low-income neighbors. The El Sobrante farm would also host educational programs for youth and community members to learn permaculture farming skills. It was a massive undertaking, but now, after just one season of cultivation, the farm is flush with greenery. Some of the newly planted trees will even bear fruit this season, although it will still be a few years until all of the crops are producing at full capacity. Now, the fast-growing organization is adding yet another branch to its business model: a nursery.

Because Planting Justice follows permaculture farming practices, which rely on growing a diversity of plants together, they had until recently been purchasing plants from Rolling River Nursery in Humboldt — which Planting Justice director Gavin Raders claims has the largest and most diverse collection of certified organic tree cultivars in North America. The collection includes a whopping 1,100 varieties of fruit and nut trees — largely rare, drought-resistant, and nutrient dense — bred by farmers from all over the world. Last fall, the owners decided to retire, and they gave Planting Justice the first opportunity to buy the nursery.

The organization had already planned to buy a large number of trees from Rolling River, so Raders decided to seize the opportunity. But because it is geographically isolated from the communities they serve, Planting Justice couldn’t keep operating the nursery in Humboldt. So, earlier this year, they decided to buy a two-acre lot on 105th Avenue in East Oakland’s Sobrante Park — a neighborhood known for having the highest unemployment and crime rates in Oakland. There, they’ll set up four greenhouses, a retail site for selling trees, along with a market for affordable, fresh produce.

Planting Justice’s El Sobrante farm will become the “mother farm” for the East Oakland nursery, meaning that it will be the home to the adult plants that will be used for grafting and propagating new plants to be sold at the nursery.

Planting Justice looked all over the East Bay for a piece of land that was large enough and also close to communities that they work with. The two acres in East Oakland, which had been deserted for years, turned out to be perfect.

“It’s big enough that we can continue to grow the business, and it’s centered in a neighborhood that has long been disenfranchised by government, funding institutions, and even community-based organizations in some ways, too,” said Raders in a recent interview. “There’s hardly any access to fresh produce, to open space, to jobs — so to have it right there is really critical.” In addition, many of the Planting Justice staff members either grew up in the area or live there currently.

Because Rolling River was so far out in the boonies of Northern California, the original owners developed a savvy online ordering service through which their clientele could order plants to be shipped all across the country. So, uprooting and moving the nursery to the East Bay won’t harm its existing customer base. But Planting Justice still plans to expand that base by offering in-person retail in Oakland. Raders pointed out that for each full-grown tree, scions (small clippings of new growth) can create approximately one hundred more every season, so the possibilities for growth are wildly exponential if there’s enough demand. Planting Justice has already hired around eight workers in the past few months, and they plan to hire more as soon as the nursery opens this summer.

To pay for the East Oakland plot, Planting Justice took out loans that the organization needs help paying back, Raders said. So they recently started a fundraising campaign on KickStarter to raise $100,000 toward their $150,000 down-payment. It’s a huge amount to raise in one month, Raders admitted, but he and the rest of the Planting Justice team are optimistic that people will see the value in the work that they do — and its potential if replicated across the country.

And, of course, they’ve already started planning their next step. A portion of the property will be used as an aquaponics farm and business incubator. Aquaponics is a farming science that mimics natural ecosystems to recycle nutrients. On one end of the system, tubs of water will host fish whose feces will be circulated to the roots of aquatic plants growing out of the other end of the tub. The plants act as a water filter for the fish, so the water never has to be changed. According to Raders, the system uses 90 percent less water than in-ground planting, and because it’s all above ground, it’s a perfect setup for city gardens.

“Aquaponics is really important for hyper-urban areas that don’t have access to healthy soil any longer,” said Raders. “It’s a great technology for empty lots that are paved, or are former gas stations, or have heavy metals or other toxins, because it’s not actually using the native soil to grow food.”

Raders’ plan is to use the site as a place to train people in aquaponics so they can eventually start their own worker-owned urban farms in empty lots all around Oakland. After people train at the onsite garden, Planting Justice will help them acquire an empty lot (by finding investors) and support the business side of the operation while they’re mastering the farming side, then pass it off once the workers are ready to run it on their own. Planting Justice will also connect farming collectives with grocery stores and other buyers looking for local, organic produce. Meanwhile, the produce from the incubator at the nursery and the farm in El Sobrante will be sold in a small market onsite, offered at a sliding-scale, accepting EBT or SNAP, or distributed to local schools, churches, and community centers in the area.

The Planting Justice vision is to transform thousands of other empty urban lots that go decades without being used by anyone into resources that advance the health and economic resiliency of the community. “It really opens up a new landscape for economic justice and food justice work,” said Raders.

Planting Justice aims to undo decades of harm caused by the criminalization and mass incarceration of communities of color by offering valuable training opportunities and jobs to formerly incarcerated individuals — along with living wages and health benefits, of course. “I’m hoping that we can use this project and the success we’ve already had to help influence a more national conversation about how to stop recidivism and mass incarceration through good jobs and meaningful work,” said Nicole Deane, the media and communications coordinator at Planting Justice. In contrast with a state average of 65 percent for all people released from state and local prisons and jails, the recidivism rate for employees of Planting Justice is zero.

When we visited the Planting Justice farm last year, the Express spoke to Maurice Bell. Bell had just been released from San Quentin prison four months before, and got a job with Planting Justice immediately. Since then, Morris has gained experience in almost every branch of the operation, and is now training with Deane to take on the role of communications coordinator. When he’s ready, she’ll pass the job on to him. Bell said the educational aspect of his job is the most rewarding and meaningful thing.

“I’m quite sure I’m not the only person who feels that way,” he said. “I’m quite sure there’s a bunch of guys out there who are just getting out of prison who have never done this work before and who have the same smile on their face that I have every day — and it’s not just about being around a great group of guys, it’s the learning aspect of it.”