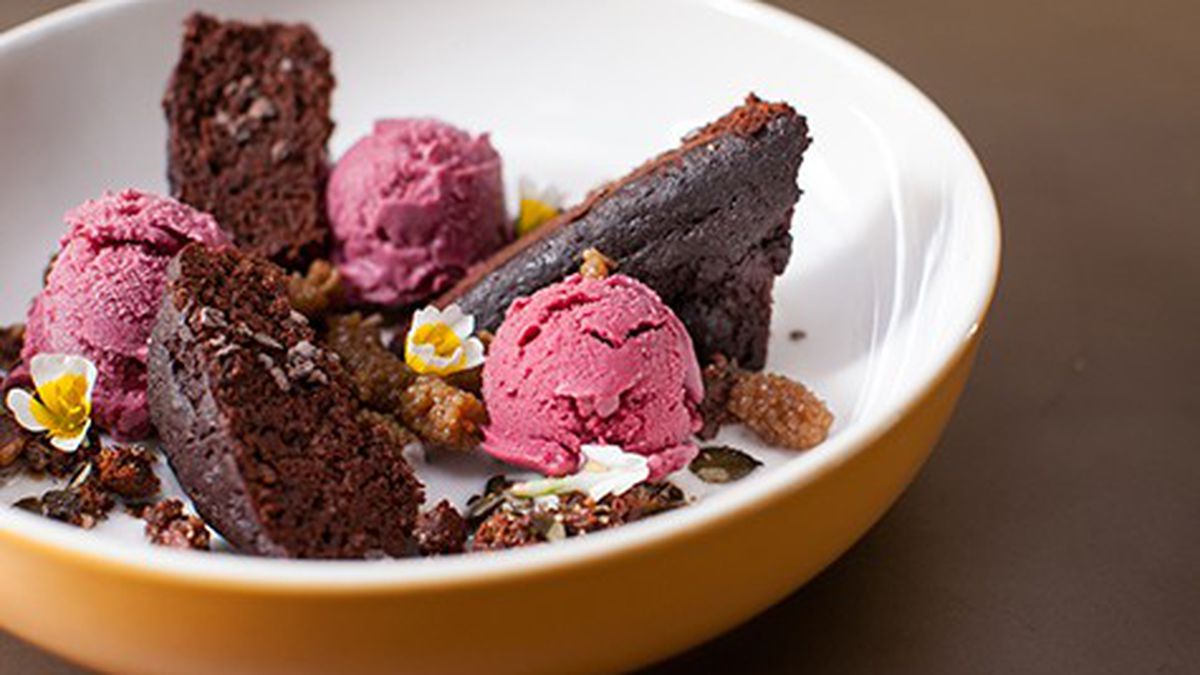 When I first heard that Berkeley would be home to the Bay Area’s first restaurant dedicated to the Paleolithic diet, I imagined Flintstones-sized slabs of still-bloody steak, perhaps served on a plate fashioned out of interlocking slices of crispy bacon. Meat on top of meat — what better way to encapsulate the so-called “caveman” diet?

Instead, on a recent Saturday morning at Mission Heirloom Garden Cafe, I found myself seated before a dish called “Eggs + Scone”: two eggs — cooked sous vide at 63 degrees Celsius for more than an hour until their runny yolks had achieved a creamy, spoonable consistency — nestled underneath a savory, gluten-free olive scone made with a mixture of coconut and arrowroot flours. The dish was served in the kind of round, vase-like bowl I imagine might be popular on Etsy: an edible terrarium for these modern times.

I doubt our prehistoric forebears, whose grain-free and legume-free diet Paleo practitioners emulate, would have even recognized it as food. But the dish also happened to be delicious, and wasn’t obscenely expensive, and if everything I ate at Mission Heirloom was even half as good, maybe I’d be penning a conversion story (“I Once Was Blind, But Now I’m Gluten-Free”). But after two rather bland and expensive meals, I came to the conclusion I’d suspected from the start: The restaurant just isn’t meant for folks like me, for whom taste is paramount.

Owners Yrmis Barroeta and Bobby Chang created Mission Heirloom as a refuge for people with all types of dietary restrictions. It’s a deeply personal mission, as the two both credit the Paleo diet for curing a host of health problems. But the cafe goes far beyond the basic restrictions of Paleo. According to Barroeta, about 80 percent of their customers come because of severe health-based dietary restrictions. Many are adherents of the even stricter “AIP” (Autoimmune Protocol) diet — a label attached to about half of the menu items at Mission Heirloom — that’s popular among those who suffer from a variety of autoimmune diseases: rheumatoid arthritis, lupus, eczema, celiac disease, and more.

The idea, then, is to serve “clean” food that’s free from toxins and allergens. The result is a list of forbidden foods that is incredibly vast and, to anyone who isn’t a true believer, occasionally bewildering. Apart from the usual Paleo omissions of grains, gluten, and legumes, no vinegar or alliums (such as garlic and onions) are used. Everything is organic. Nothing is grilled, deep-fried, caramelized, or even sautéed. And, the consensus of contemporary chefdom be damned, umami — the sainted fifth taste — is strictly forbidden.

What Barroeta and Chang have built is more of a laboratory than a traditional kitchen — indeed, there isn’t even a stove on the premises. Most of the meats are cooked in a precise steam chamber known as a CVap, and an immersion circulator and a Pacojet (a high-tech blender/ice cream maker) both get plenty of mileage.

In the end, this is a cuisine — turning its back, as it does, on centuries of collective cooking wisdom — that yields a lot of underseasoned food and odd textures. Turkey meatballs, made from the whole bird (“head-to-tail” being another of Mission Heirloom’s abiding philosophies), embodied everything people hate about health food: bland, carrot-flecked meatballs served over a bed of even blander purple cabbage. A dandelion truffle pesto was the only thing in the dish that had flavor, but there was so little of it — a scant dab on each meatball — that it barely made a difference.

Shepherd’s pie came topped with gummy, flavorless puréed cauliflower — as Seinfeld’s “soup Nazi” would say, “No hearty mashed potatoes for you!” A dinner special of shawarma-style pulled beef was, of course, missing the traditional version’s characteristic garlickiness. Instead, it tasted like strands of unseasoned cotton, garnished with a squeeze of lime.

Despite its forlorn appearance, one of the better entrées was the beef burger salad — a beef patty served alongside a pile of salad greens, basically. The burger — a fifty/fifty mix of grass-fed beef and beef heart — was full of flavor, and steam-baked to a precise medium-rare. The only thing missing: the well-charred crust you’d get from a high-temperature sear, which of course was no accidental omission.

As it turns out, the undersalting is by design — an accommodation to the many elderly people (“viejitos,” Barroeta calls them) who eat at the restaurant. Fair enough. But if I could offer just one piece of advice to would-be diners, it would be this: Make ample use of the artisanal salt grinders that the servers happily provide upon request.

Barroeta, who now does most of the cooking and recipe development, said Mission Heirloom has gotten even more stringent over time, which has made it difficult to work with a chef on a long-term basis. The restaurant recently parted ways with opening chef Christian Phernetton, and instead of hiring someone new, Barroeta and Chang dream of bringing in food bloggers and other like-minded chefs to take over their kitchen for a one- or two-week residency of sorts.

During my meals at Mission Heirloom, I kept going back and forth between admiration for the loveliness of both the garden setting and the to-go jars of colorful soups and stews all lined up in a gleaming row, and the nagging feeling that I’d fallen victim to some kind of scam. The beverage selection alone was enough to set a price-conscious customer’s blood to boiling. Most prominent, perhaps, is the Bulletproof coffee, a fad beverage of choice among the CrossFit crowd — a concoction whose touted benefits include weight loss and a more even-keeled caffeine high, without the subsequent crash. To make the drink, brewed coffee is blended with grassfed butter and MCT oil (aka “brain octane”), a purified oil that’s extracted from coconut and palm oils. I’ll leave it to others to debate Bulletproof coffee’s various health claims (let’s just say they’re controversial); the drink was, to my taste, flatly unpleasant — so rich as to border on nausea-inducing. It also cost $6.50, or roughly double the going rate for a standard latte or cappuccino.

Mission Heirloom is also one of the only places in town that sells raw, unpasteurized camel’s milk, though it will cost you $19.99 for what’s intended to be a one-person serving. The drink had a whiff of the barnyard funk of, well, a real live camel, and the taste was slightly sweet, with pronounced overtones of freshly mowed grass. With apologies to readers for whom camel milk is a part of your cultural heritage: This may have been the worst twenty bucks I’ve spent in recent memory. Four of us jointly weren’t able to finish the bottle.

There were moments, though, when I got a glimpse of the sense of promise the restaurant represents for someone who needs to be on such a diet. Each meal started with complimentary yucca crackers (aka casave) called “Yucan Crunch,” an import from the Dominican Republic that reminded me of shredded wheat — quite tasty when spread with the whipped coconut oil and truffle salt provided as a butter proxy. The egg and scone is something I wouldn’t mind eating for breakfast every day. A vegan puréed broccoli and spinach soup was velvety and satisfyingly savory — delicious, even served lukewarm. And the Black Forest Decadence was an aptly named (if pricey, at $12) marvel of gluten-free baking that combined dark chocolate, fresh fruit, and a trio of Pacojet-powered sorbets.

Maybe it’s unkind for me, a restaurant critic, to disparage the food of the ill and allergy-ridden. As one of the taglines on Mission Heirloom’s website reads, “Dietary requirements are culinary opportunities.” Just be forewarned: If you don’t have major dietary restrictions, don’t be surprised if you leave feeling slightly confused, and quite possibly still hungry.