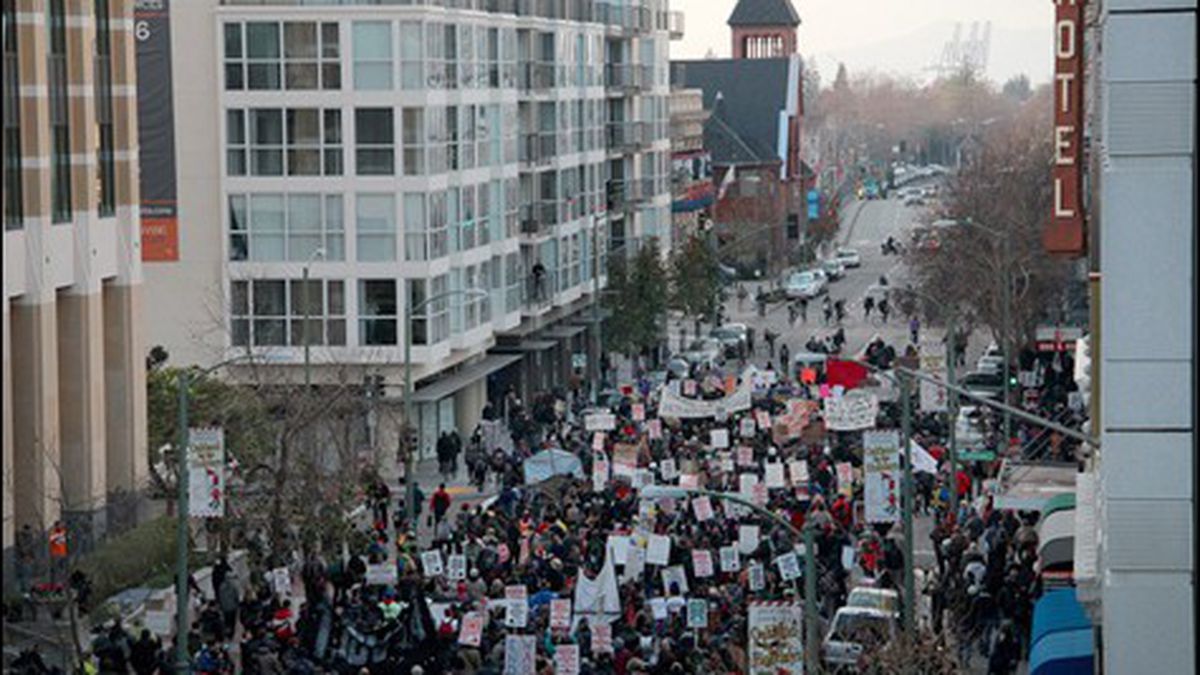 What’s Next for Occupy?

Few could have predicted the coming of the Occupy movement and the ripples it created on the fabric of American society. In its short, three-month life, the movement has shifted the political calculus from the drum-beating march toward uncompromising austerity to the real and largely ignored issue of economic inequality that has spread to the middle class like a contagion.

Despite a swift crackdown on the movement’s first incarnation — encampments of public space — Occupy, particularly in the Bay Area, shows little sign of disappearing outright. But tactics are changing. Gone are the tent cities that defined the movement; what is next is Occupy 2.0.

Given the current economic and political climate, it’s no surprise that such a spontaneous, national movement would spring forth from America’s youth. Youth unemployment is among the highest it’s been since 1948 at 23.7 percent, closer to 40 percent for black youth. And taxes on the most wealthy have been trending downward since the Eighties. Today, the nation’s One Percent captures 40 percent of all the wealth.

But high unemployment and the growing chasm between rich and poor also have empowered today’s youth to take action. They’re a generation frustrated with a system that they see as thoroughly rotten — a hopeless circus of weekly governmental tragedies that would make the Greeks shudder. Eddie, a 23-year-old native of Ohio, is one such youth. After graduating college and trying six times to find a job back home, he decided to travel from Occupy to Occupy in order to help the movement along. “I find humanitarian care and warmth here in the Occupy Nation,” he explained.

Diane Reiner, a 57-year-old member of Occupy Oakland, contends that this movement also is different from the protests of the Sixties and Seventies, when the mantra was “Don’t trust anyone over thirty.” Even though the Occupy movement skews toward those who are in their twenties and thirties, it is rather inclusive, Reiner noted. David, a 28-year-old elementary school teacher, added that a number of youth present in the movement are street kids, those who have disengaged from the system for one reason or another. Youth also have been more present during direct actions.

Indeed, after a handful of youth planted a flag at Zuccotti Park in New York City on September 17, the Occupy movement spread like a passionate wildfire to virtually every major city in the country. In California, there were, at its peak in early November, at least one hundred active occupations, twenty of which were encampments. The Bay Area saw at least sixteen Occupies materialize, not including colleges and universities, and encampments popped up in San Francisco, Oakland, Berkeley, UC Berkeley, and San Jose.

Although Occupy Wall Street is considered the flagship for the movement, San Francisco protesters marched on the Financial District on the same day OWS was founded, blossoming into Occupy SF shortly thereafter. Occupy SF would see itself pushed around downtown for a month until finding a home at Justin Herman Plaza.

Occupy Oakland established a camp at Frank Ogawa Plaza on October 10, and it quickly ballooned to more than one hundred people. Two weeks later, hundreds of riot police from OPD and sixteen other law enforcement agencies dismantled the camp during an early-morning raid, only to spawn a backlash later that day where thousands shut down the downtown area.

It was there that police unleashed tear gas and less-than-lethal projectiles on a largely peaceful group of protesters, not once but five times over the course of that night after having had bottles thrown at them. Scott Olsen, an Iraqi War veteran, was shot in the head by police with a tear gas canister and became the movement’s living martyr.

But what happened in Oakland was not unique. Law enforcement agencies, armed with a decade’s worth of anti-terrorism training and Homeland Security funding, were used by dozens of mayors and university presidents across the country to uproot protesters from encampments. Police at UC Berkeley used batons to beat protesters who linked arms and refused to move. Videographer Scott Campbell was shot with a projectile by Oakland police on November 3 while video-recording a line of officers, and another military veteran was hit by cops that night, causing his spleen to rupture while in custody.

Few Wall Street executives have been criminally charged for their role in destroying the economy, but thousands have been arrested nationwide for peacefully protesting, including at least five hundred people in San Francisco and Oakland, and at UC Berkeley. The price tag to evict campers also was not without cost to taxpayers: Oakland spent at least $2.4 million and San Francisco at least $1 million. This dichotomy reflects a system that mostly forgives those who set the country on a path to economic ruin, yet arrests others for camping, David noted. “The courts are there to enforce the status quo; the status quo is capitalism,” he said.

Locally, Occupy Oakland became the most militant, perhaps because of the history between activists and police. Vandals using so-called Black Bloc tactics wielded considerable influence over Occupy Oakland, and protesters here were the least willing to negotiate with authorities. Occupiers booed Mayor Jean Quan at their General Assembly when she tried to address the crowd, and police were denied access to the encampment to deal with troublesome people.

Yet for all of its uncompromising ideology, it was Occupy Oakland that executed the first successful general strike in America since 1946, drawing well over ten thousand marchers who succeeded in shutting down the Port of Oakland on November 2. That victory, however, was marred by the smashed windows, barricade fires, and the rampant graffiti by a handful of vandals in downtown the next morning. The result led to a contentious discussion in Occupy Oakland about nonviolence, where some wanted a resolution embracing it, while others instead favored a “diversity of tactics” that effectively condoned violent action.

Oakland’s militancy was balanced by Occupy SF’s diplomatic attitude. Occupiers in the city vigorously negotiated with officials for weeks in an attempt to bring the camp to code. In the beginning, the occupiers were praised by city officials, but after Occupy Oakland’s camp was cleared by police on November 14, Mayor Ed Lee and the San Francisco camp grew increasingly frustrated with one another. “The (occupiers) that talked to their city had a good relationship in a way that didn’t violate their autonomy,” said Scott Anansi Rossi, who is a member of Occupy SF’s Welcome Committee. “On paper, we were very hopeful. Maybe the city saw that we weren’t a threat. Maybe we shouldn’t have taken Ed Lee’s word.”

After Lee offered Occupy SF a home one block away from one of the most dangerous areas of the Mission, the camp split between those who wanted a permanent home and those who didn’t want to stray from the Occupy message. After a marathon seven-hour General Assembly, the offer was declined and on December 5, after weeks of tension, the camp was cleared by SFPD.

But the camps, as a tactic, were successful in that they created a constant presence for the movement, one that allowed passersby to stop in and learn about what was happening. It also provided a safe space for the often-diffuse homeless community to congregate, get sleep, food, and basic medical attention. “It was a valid part of the movement,” Reiner said, “and it was worth defending.”

But, as Rossi pointed out, the camps also were a public relations crisis, with media focusing on images of downtrodden individuals and running sensationalist pieces about health and sanitation conditions rather than about the movement’s message.

And now, with the camps disbanded, the Occupy movement is shifting tactics. Oakland and San Francisco have jumped into foreclosure defense, occupying homes of families facing eviction because they defaulted on their mortgages. In Oakland, there are at least two foreclosure defenses in progress. Also, a handful of folks are holding down a 24-hour vigil at Frank Ogawa Plaza in order to maintain a public presence about issues of homelessness and economic inequality.

“If you have a bunch of actions happening at the same time, the police aren’t trained for that model,” Rossi explained. “I don’t even know where [the occupation is] going to be until it’s up and running.”

There’s also greater coordination happening between Occupies. Oakland, again, led the rest by organizing the largely successful West Coast port shutdown, which impacted ports in Washington, Hawaii, and Houston, and effectively shut down the Port of Oakland. Oakland also is working with at least twelve other Occupies on a national radio program, Reiner said. And there is Occupy Congress, set for January 17, to lobby Congress during its upcoming session.

But what the future holds for Occupy is largely up to each individual offshoot. While some may get involved with electoral politics, there are sure to be more marches, more strikes, more shutdowns, and, likely, more confrontations with police. The movement, to be sure, is just beginning, and the stakes promise to rise as November 2012 approaches.

“This is a young, growing movement in its infancy. It’s not a one-message movement,” Reiner said. “This is real, this is unpredictable.”

Best Place to Get Retro Adidas Sweats and Mom Jeans