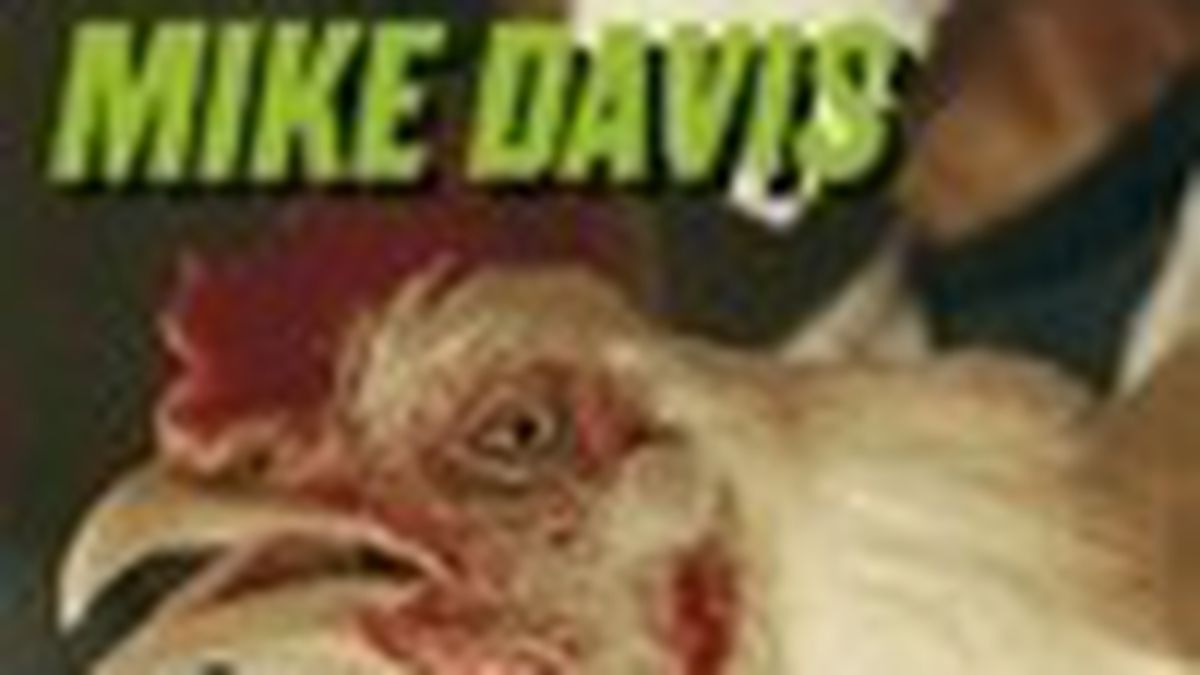 Love torments soldiers in Haiti, and avian flu is poised to kill several hundred million of us.

The pervasive sense of doom in this novel about two American soldiers who fall in love, split up, and reunite during the 1994 invasion of Haiti stems mostly from Bauman’s fast-paced, clipped style and intricate descriptions. As bulkheads and flotillas lurch toward Port-au-Prince’s blue-green harbor, rattletrap Humvees teeter down a road that is “a washboard of potholes and gravel and concrete chunks,” and a lone chopper cuts through the sky, something really bad is clearly lurking just around the bend. The best part is Bauman’s way of displacing Haiti’s sordid political climate, characterized by public lynchings and execrable prisons, into the island’s atmosphere. Told mostly from the perspective of female army sergeant Tory Harris, Voodoo Lounge is supposed to be urgent and dramatic, but often sounds dry and clinical. Though Bauman has a shrewd eye for detail — he is, after all, a vet who served in Somalia and Haiti — he is less adept at writing the romantic parts, or developing his characters’ interior lives: The sex scenes are tiresome (granted, the whole war-as-sexual-climax thing is already clichéd) and a lot less absorbing than Bauman’s descriptions of the Caribbean sun “pressing flat” over the water. This book’s real romance isn’t character-driven, as the language of war seems much more seductive than the language of love.
— Rachel Swan

The Flower Shop
By Leonard Koren

Postmodern aesthetics guru Koren’s latest offering contextualizes his inarticulably delicate sense of harmony within the studio of an avant-garde Viennese florist. Blumenkraft (literally, unironically: Flower Power) embraces a sparsely surreal aesthetic, in which “cut flowers are abstract entities,” each of whose “unique, singular beauty” is assayed and expressed carefully: Petals are coaxed gently open; intrusive leaves suffer the knife. Favoring modernist floral arrangements over traditional “rose bombs,” Blumenkraft’s artists focus on the interplay of naturally incompatible species, often embracing customers’ seemingly cacophonous selections. Rather than cluttering bouquets with excess foliage, stems’ lower ends are interlaced with papery bulrush or entwined in an angular knot of Dutch rush; Koren likens their visual integrity to “a bird’s nest designed by Picasso.” Clusters of these spindly masterpieces inhabit the shop’s customized glass “blumariums,” eschewing vases and ghastly refrigerated displays. True to form, Koren’s duotone photographs highlight the shop’s unselfconscious minimalism, and enhance a beautifully designed book. Only briefly, however, do we glimpse the endpoint of Blumenkraft’s bourgeois worldview: A staffer packages loose rose petals for delivery to a nearby upscale hotel. “They put the petals into every toilet bowl,” she cheerfully explains.
— Nicholas Raymond

Dancing in the Dark
By Caryl Phillips

It has a bad title and doesn’t recover. This historical fiction by an award-winning Caribbean-born playwright and novelist could have been risky, powerful, inventive, or two dozen other synonyms for good, but ends up only dull. If ever a man deserved a reclamation project, it’s Bert Williams, an early-20th-century African-American “face performer” — read: minstrel — and one of the great tormented real-life geniuses. But before a man lost to history can be remembered he must be revived, and at the end of this tepid novel, poor Williams is as dead as he ever was. Imagine a black man who earns success by smearing on the burnt cork and singing coon songs onstage for whitey. Conflicted, ashamed, resented by blacks, applauded by whites but always their fool, always on the defensive — but that’s as far as Phillips gets. He doesn’t discover or reveal a thing about what it was like to be Williams, about how the man was never able to shake the world from his shoulders. Fortunately, many of Williams’ surviving recordings have recently made it to CD. The pain and struggle of his life is evident in his ashen and unsteady voice. It’s a voice Phillips never finds.
— Matt King

This history professor’s heavily annotated look at Third Reich fashion would probably be most at home in an undergraduate women’s studies seminar; the first part, in which Guenther summarizes many years of German fashion history, is a bit of a slog. But eventually, the details — such as the fact that Hermann Göring liked to wear rouge and a violet kimono, or that deep into the war, hausfraus out of necessity unraveled burlap sacks and reknitted them into panties — become mesmerizing. As Guenther shows, the Nazi approach to creating a German feminine ideal was deeply ambivalent. While fascist propaganda upheld the virtues of motherhood and purity, German women were being worked so hard, and sacrificing so much (including, of course, their mates) for the war effort that birthrates plummeted. At the same time, while they were expected to join auxiliary service organizations, they were denied the accompanying uniforms because Nazi leaders feared overmilitarizing (and thus masculinizing) the female population. In the end, the push to create “purely German” couture was, of course, an excuse to oust the successful Jewish industry leaders. As everyone knows, the Nazis fully succeeded in that goal, but never conceived of a popular German aesthetic: Women under the Third Reich liked their Parisian dresses and Elizabeth Arden cosmetics too much to ever go back to dirndls and braids.
— Nora Sohnen

The Monster at Our Door
By Mike Davis

For epidemic enthusiasts, these are disappointing times. The much-heralded SARS disappeared with a whimper, anthrax was a bust, and even AIDS has become a semimanageable chronic condition in the US. There’s always obesity, but you couldn’t create a less sexy epidemic if you tried. Into the breach, then, comes H5N1, better known as avian flu. MacArthur Fellow Davis’ new book describes in bleak detail how this disease transmits from poultry to people, mutating frantically in order to better attack its hosts. Experts predict that H5N1 could kill several hundred million people worldwide; the only mystery is why it hasn’t happened yet. Davis does an excellent job of locating the disease within the context of the modern ills that will fuel its spread. Culprits include deforestation, reckless urbanization, and the capture of government regulators by greedy agribusinesses. It should come as no surprise that the brunt of this pandemic will likely be borne by the poor and the brown of the world. But the First World won’t be spared either: A vaccine exists, but since the disease is not (yet) associated with terrorism, the United States has stockpiled only a tiny fraction of the necessary amount. This is a book a conspiracy theorist would love. Unfortunately, it happens to be based on hard science. It’s only a matter of time before this nightmare becomes reality. Drumstick, anyone?
— Zac Unger

This oddly joyous new book profiles what may or may not be an emerging subculture: Born-Again Jock. These are the guys who skipped sports as teens because the coach didn’t like their long hair, or because the idea of adult-supervised fun was no longer, uh, fun. Yet they never lost their love of the game, even as their lives fell apart. Albert’s Griffith Park Pirates baseball team is united by the kind of narratives that elicit “sucks to be you” shrugs. His own is typical: As founder of the band Christian Death and ex-drummer for legendary Bad Religion, he boasts a solid punk pedigree. Now in his forties, with a case of Hep C from years of casual syringing while writing screenplays you’ve never heard of, Albert is an unlikely candidate for right field: “For someone like me, an antisocial intellectual who had spent his life sneering at any kind of middle-class normalcy, joining a baseball team felt oddly subversive.” Most of Wrecking Crew comprises profiles of the Pirates. Much to Albert’s credit, these often hilarious vignettes paint a complex portrait of a diversely dysfunctional team and its heartbreaking struggles for redemption. Maybe the prospect of grown men playing ball and taking it seriously seems downright pathetic. But as Albert shows, baseball is rarely only about baseball.
— John Dicker

The Final Frontiersman
By James Campbell

Heimo Korth has an unusual perspective on proposed oil drilling in the Arctic National Wildlife Refuge: “Not in my backyard.” He’s one of only seven trappers with a cabin in the refuge, and, after nearly three decades of living off the land, he knows the territory well. Campbell lived with Korth to better understand the gradual transformations of the Alaskan landscape and way of life. It’s worth reading for survival stories alone: Korth’s daily life is a battle against the elements. He checks his traps for wolverines and lynx in minus-forty-degree weather, when one mistake could kill him. Tending the homefires are his Inuit wife and their two daughters. The teens hunt caribou, haul water from the river, and split wood, but they’ve begun to long for social lives, CDs, and boyfriends. Campbell succeeds in drawing the nuanced portrait of a family living an anachronistic life, but ultimately it’s about more than the Korths: It’s a comment on America’s relationship to its wild places. Two positions drive the debate over what to do with ANWR, a chunk of wilderness the size of South Carolina: Build roads and rigs to extract its resources, or leave it untouched for roaming caribou and ecotourists. Absent from the equation are people like Korth. By the end of the book, it’s obvious that the caribou aren’t the most endangered species.
— Eliza Strickland