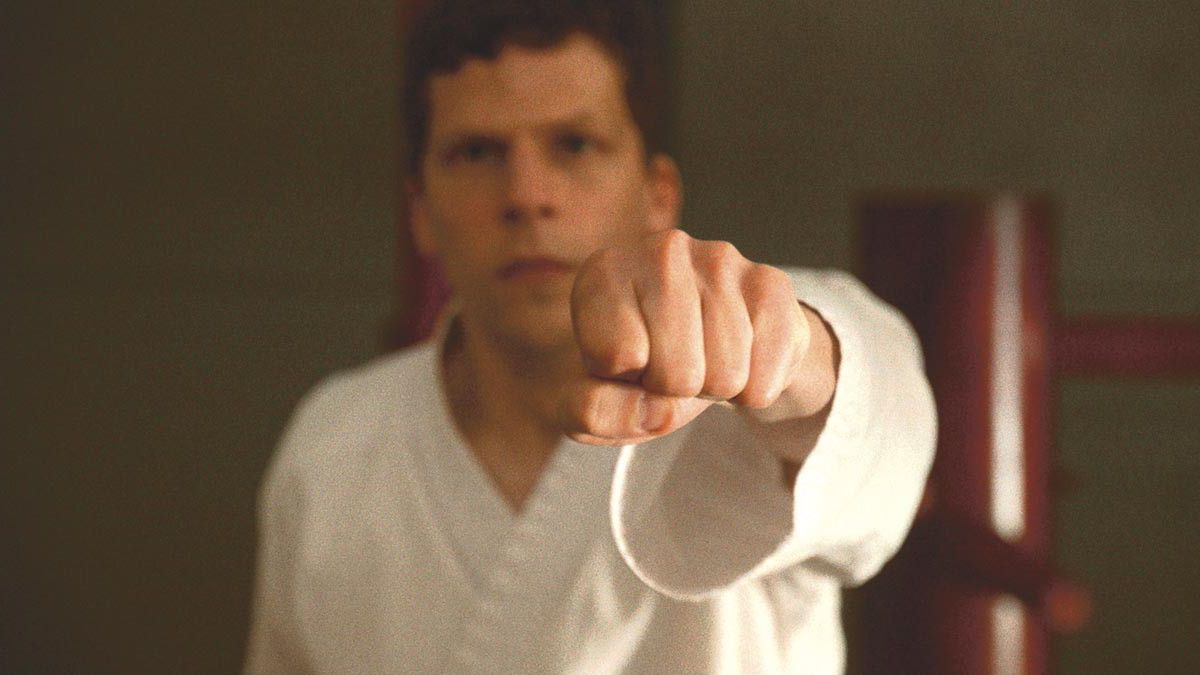 What’s Art Got to Do With It?

The Art of Self Defense is so repellent it's energy-sapping.

The Art of Self Defense is a movie built to repel us, to provoke a violent reaction, to invite us to despise not just the movie itself, or even all movies, but the world in general. A movie that sends us out of the theater in a foul mood about life. It’s so repellant that it’s truly energy-sapping. We have to believe that’s precisely what filmmaker Riley Stearns intends, because the gloom is unmistakable. So in that respect we could consider the film a success. But really, it’s so gratingly nasty we wish we could just forget about it.

The mood is established in the very first scene. Casey (Jesse Eisenberg) is seated in a fast-food coffee shop, quietly sipping a drink, when a man and woman enter and immediately begin complaining about everything they see, in French, with particular attention toward Casey. When Casey leaves the shop and gets into his car, we notice that he’s studying French. The two complainers never reappear in the movie. Evidently their only purpose is to demonstrate that Casey gets no respect from anyone. His colleagues play a variation on that riff several times, in the office where he works as an accountant.

Casey gets attacked one night by a group of motorcyclists, prompting him to join a karate dojo in an effort to toughen himself up. The sensei (Alessandro Nivola) runs the dojo as a sort of punitive private army, with Casey’s fellow student Anna (Imogen Poots) as his favorite victim. As writer-director Stearns’ narrative marches along from one scene of humiliation to the next, it resembles a remake of Fight Club in the style of Napoleon Dynamite, with absurdity used as a weapon instead of as an ingratiating touch.

We begin to wonder about Stearns. His previous directorial effort, Faults, apparently took a similar mumblecore approach to the subject of cult deprogramming. We never saw it, but The Art of Self Defense does not make us want to follow up with him.&#8;