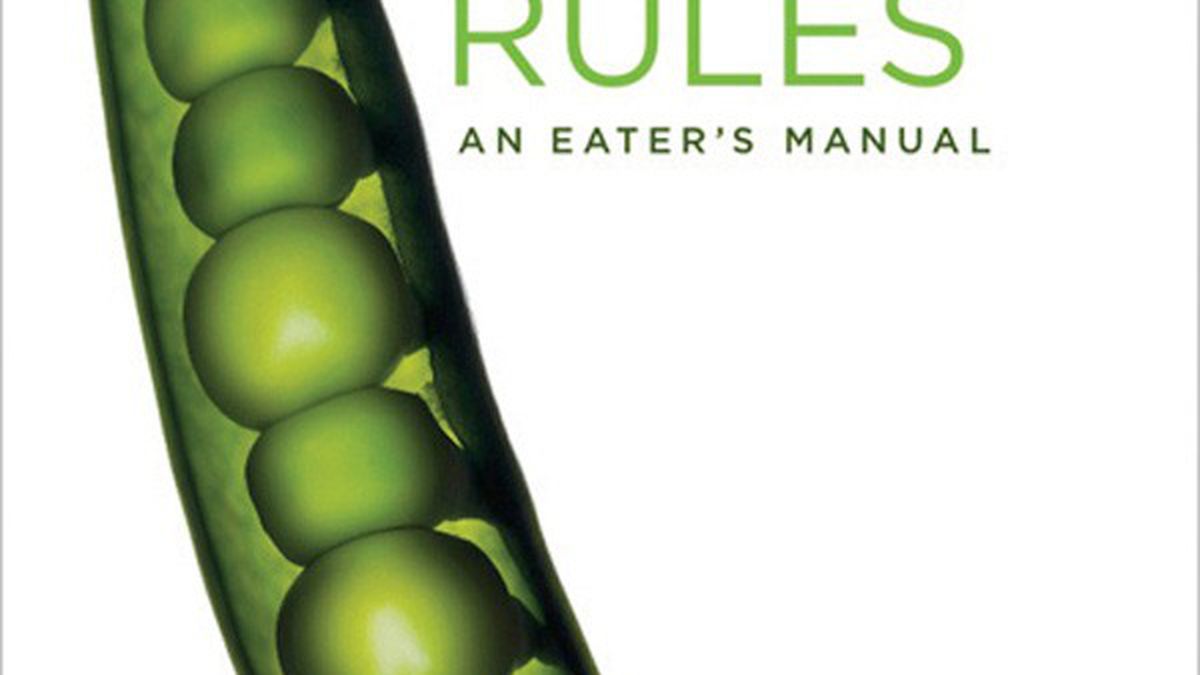 At first glance, you might think this title is an enthusiastic declaration of just how groovy food really is: Food rules! But no. This little handbook from local nutrition maven Michael Pollan is instead a sober (and sobering) set of rules for what you must and must not eat. Another fad diet in an endless line of come-and-gone fad diets stretching back for decades? Hardly. Food Rules does not dictate a specific regimen of daily meals, nor is it clogged with citations and statistics. It instead summarizes in easy-to-remember list form the basics of our species’ accumulated food wisdom, which boils down to what you might expect from Pollan: natural good, artificial bad.

The best part of Food Rules is that its 64 “rules” are more like slogans, designed to stick in your mind: “The whiter the bread, the sooner you will be dead,” for instance. “Don’t eat anything your great-grandmother wouldn’t recognize as food.” You can even chant them to yourself as you push your cart up and down the supermarket aisles, a mantra to health, with your body as the temple.

Some of the rules, however, do go a bit overboard. “Don’t eat anything with more than five ingredients” means you can kiss curry goodbye, not to mention General Tso’s chicken and burritos. Sniff. It was fun while it lasted.

Honestly, if you’ve already read Pollan’s earlier bestsellers, Omnivore’s Dilemma and In Defense of Food, then you won’t have much use for Food Rules, except as a back-pocket reminder in case you get tempted by a Ding Dong. But if you’ve never had time to slog through his first books, and can accept without footnotes the facts behind his recommendations, then think of Food Rules as the foodie generation’s 64 Commandments. (Penguin)

Interested in a compendium of wacky astronaut trivia? Oakland author Mary Roach is your gal. Want to find out how to pack for a trip to Mars? Not so much.

Having already penned bestsellers about the science of corpses, sex, and the afterlife, America’s favorite pop-sci writer turns her attention to space travel, in particular the problem of fitting stinky humans into tiny metal boxes for long periods of time. Roach takes unrestrained glee in grossing out her readers, spending at last half the book investigating what happens to all the poop, pee, barf, sweat, burps, farts, and semen (yes, really) emanating from astronauts’ bodies in space. Roach spares no effort to dig up every forgotten anecdote and taboo detail of NASA’s manned space program, relishing the weirdness of it all.

Unfortunately, her scattershot approach feels much more like a stand-up comedy routine for nerds than a serious investigation of how to prepare for an actual trip to Mars. The Red Planet is in fact only briefly mentioned, packing even less so. The title may be misleading, but Mary’s Big Book of Hilarious Space Facts must not have tested well with the focus groups. (W. W. Norton)

Samuel Clemens has come back to life; so vivid are the words of his newly published autobiography that you’ll swear you just spent an evening with the man.

Clemens — better known as Mark Twain — abandoned several earlier stilted attempts at telling his life story and in 1906 sat down with a microphone and began dictating what he really wanted to say, unrestrained by his inner editor. He concluded that the results were too honest and explosive for the era, so he left strict instructions that his dictations were not be published until exactly one hundred years after his death.

Incredibly, his wishes were partly followed. Twain died in 1910, four years after recording his personal recollections, and a century later, to the day, Volume 1 of his memoirs has finally been released, thanks to the scholars at UC Berkeley’s Bancroft Library, where Twain’s entire literary estate is enshrined.

To characterize this edition as “unexpurgated” would be a bit of an understatement. Yes, every word, every pause of Twain’s dictation is transcribed here faithfully. But — this being a scholarly edition released by an academic press — introductions, footnotes, commentaries, explanations, and earlier autobiographical efforts comprise at least three-quarters of the massive tome. But that doesn’t seem to have scared off the buying public: A new work by Mark Twain is an epochal literary event, and this release has become a legitimate bestseller nationwide, a remarkable and possibly unique achievement for a university press.

You can practically hear Clemens’ voice as you read his rambling reminiscences, stream-of-consciousness before the term was even invented, casting aside chronology in favor of “side-excursions,” digressions which he rightly identified as the heart and soul of any life story. (University of California Press)

Nagasaki, 1799: Japan is still closed to outsiders. The Western world’s only point of contact with Imperial Japan is on Dejima, a small island in Nagasaki Bay created to segregate a handful of Dutch merchants from any communication with the Japanese. Into this all-too-real picture-perfect postcard of colonialist exoticism, author David Mitchell introduces his protagonist Jacob de Zoet, a young Dutch functionary sent to investigate accounting irregularities at the Dejima offices of the Dutch East Indies Company.

From this launching point, Mitchell unfurls a mesmerizing tapestry of Edo-period Nagasaki, with meticulously researched details on every page, in every paragraph, in (enough already!) every sentence. Much appreciated is the attention paid to realism not just in the era’s physical details, but in the cultural attitudes as well: The budding romance between the protagonist and Orito Aibagawa, a poignant Japanese midwife, is as chaste and thwarted as it likely would have been in real life.

Where readers tend to get lost is in the overwhelming number of sketchily drawn side characters sporting a bewildering blur of medieval Japanese monikers; by page 75 you may have trouble keeping track of who’s who. But no matter: You can always take refuge in the Dickensian grotesqueries Mitchell splatters liberally throughout. (Random House)

David Sedaris‘ name on the cover of a book is like the treasury secretary’s signature on a fifty-dollar bill: Its very presence magically transforms paper into money. Sedaris could write anything and it would be a bestseller. Even a children’s book of simple parables featuring talking animals. Which, truth be told, is exactly what he’s done here. Squirrel Seeks Chipmunk is a 21st-century Aesop’s Fables; perhaps it more accurately could be shelved next to Hilaire Belloc‘s The Bad Child’s Book Of Beasts or Rudyard Kipling‘s Just So Stories, in the “Illustrated Children’s Bestiaries Actually Written for Adults” section.

Each of the fables theoretically carries a moral, though in many cases it’s hard to sort out the moral from the morass of entrails and ruined lives heaped at the conclusion of each tale. Yes, this is Sedaris at his most pessimistic and unforgiving: It feels more like a literary collaboration between Charles Addams and David Cronenberg.

The second story, “The Migrating Warblers,” begins, “The yellow warbler would often claim that she was fine until she hit Brownsville. ‘Then — wham!’ She’d tell her friends. ‘I don’t know if it’s the air or what, but whenever we pass it on our migration, I have to stop and puke my guts out.'” The puking comes immediately after the first story, “The Cat and the Baboon,” which concerns itself with anus-licking. After this inauspicious start, we encounter animals getting their eyes poked out, feces, torture, more anuses and feces, and mutilation. Graphic illustrations by Ian Falconer conjure the mood. In those instances where the plot doesn’t revolve around bodily fluids, the stories inevitably conclude with humiliation or misery.

Is there a place for dark humor in American literature? Certainly. Yet the problem with Squirrel Seeks Chipmunk is not the presence of dark, but the absence of humor. (Little, Brown and Co.)

An instant classic, all the more delicious because it was so unexpected. Keith Richards, degenerate bad boy of rock ‘n’ roll, bashing out one of the best books of the year? Sure, he can write great songs, but great books? (Well, with the help of a co-writer who turned Richards’ narrative into text: yes.)

The reason Life transcends almost every other previous book about rock is that is isn’t based on research or interviews: Richards himself is the research. He doesn’t need to interview anyone, because he’s the guy you’d have to interview if you wanted to get the real story. It’s 100 percent source material, no filler.

In case you’ve missed the wall-to-wall media blitz about this one, Life chronicles Richards’ story from the very beginning, tracing his childhood in post-war England through the founding of The Rolling Stones to the drug-addled nightmare glory of global superstardom. Along the way he’s got enough juicy anecdotes to fill a hundred lifetimes. Forget the PBS retrospectives: This is the history of the rock ‘n’ roll generation, from one of its actual progenitors. (Little, Brown and Co.)