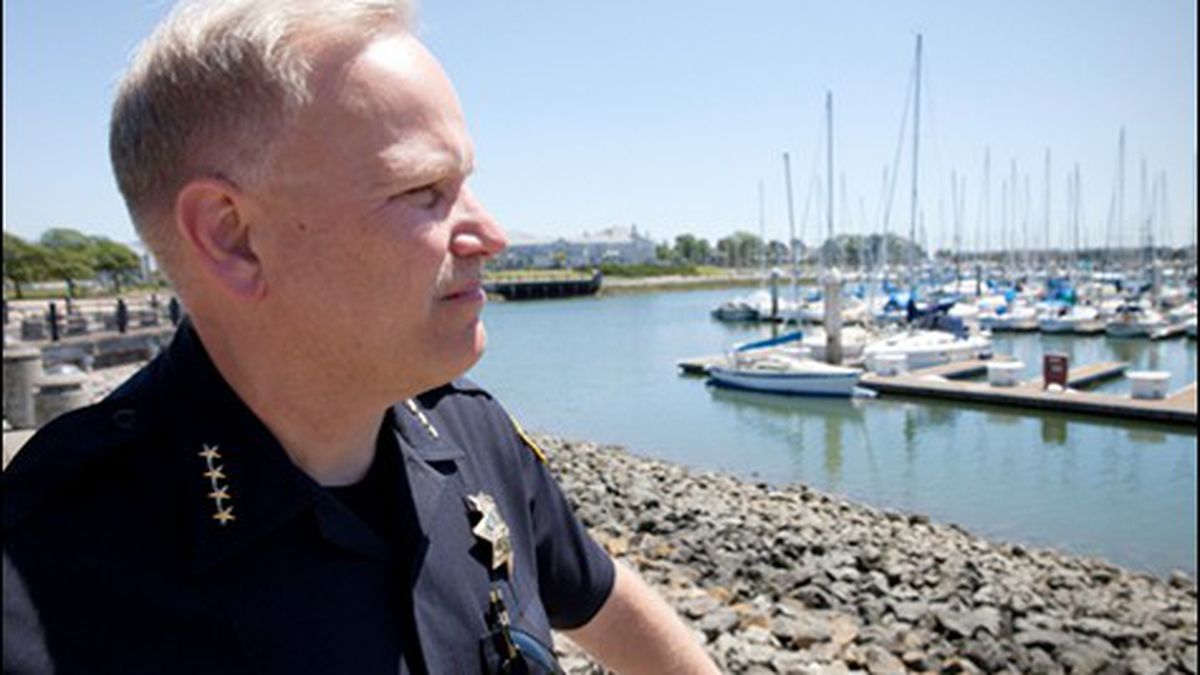 What Richmond’s Getting Right

As Oakland struggles with violent crime, another East Bay city has dramatically reduced its murder rate.

When Chris Magnus took over as the head of Richmond’s police force in 2006, he went through all the normal first steps any new chief would: He hired staff and met with city leaders, set out a list of priorities, and the like. But he also made a few unusual decisions. “I started talking to neighborhood groups, including some of the neighborhoods that had the biggest violent crime issues,” he recalled in a recent interview. “And I asked them what their priorities were, and they said their biggest priority was abandoned cars. So we took literally thousands of abandoned cars off the street.”

This may sound a bit unorthodox, but it also stands, in miniature, as an example of Magnus’ approach. It’s an approach that combines blight abatement and old-fashioned, evidence-based policing with a serious commitment to the community’s concerns, whatever they are. And it’s helped Magnus dramatically reduce the homicide rate in Richmond, once known as one of the most dangerous places in America, even without a huge increase in the city tax base, and even as cities like Oakland and San Jose have seen a spike in violent crime.

Magnus is careful not to claim victory just yet, but the numbers speak for themselves. Last year, Richmond, a city of about 103,000 people, saw 18 homicides, down from 26 in 2011 and a decade high of 47 in 2007. At press time, there had been four homicides within the city’s jurisdiction in just over the first four months of 2013; the total crime rate, as well, is down by about 20 percent since 2006, according to department statistics.

Franklin Zimring, a criminal justice expert at UC Berkeley School of Law, said that all this taken together is a good sign for Richmond, though he cautioned against placing too much stock in year-to-year fluctuations. “Things are better in Richmond now than they’ve been for a long time,” he said. “The problem is sorting out how much of that is substantive change in long-term risks and how much of that is good news in the Department of Random Fluctuations. [I have] mild skepticism about fluctuation in numbers, but I think that 2013, if it continues or even extends the downward trajectory, will be decisive for a lot of observers that changes on the ground are generating impact.”

As the Oakland Police Department continues to struggle with a severe staffing shortage brought on by a strained city budget and uncommonly high cop salaries and benefits, Richmond has managed, in Magnus’ time, to increase the size of its police force by nearly a third — from 150 officers in 2006 to 195 now. The RPD is now significantly larger in relation to city population than the OPD, which has only about 650 officers for a city four times Richmond’s size. “A big part of this is, we in Richmond have been fortunate to keep our police department fully funded,” said Richmond City Councilman Tom Butt. “And that’s one of the problems Oakland has had. You get what you pay for.”

According to Magnus, Richmond cops have had to pay into their pensions since the city faced a financial crisis in the Nineties, which has enabled the department to hire more officers for less money than Oakland. Oakland police officers, by contrast, didn’t start contributing to their pensions until mid 2011.

The RPD has also taken advantage of tools like the violence-prevention program Ceasefire and the crime-statistics computer program CompStat. It’s implemented a geographic policing model, wherein the city is divided into districts and then beats, each of which has specific officers who are held accountable for crime there. The City of Richmond has founded an Office of Neighborhood Safety, which exists separately from the police department, employs some ten people, and supports at-risk teens and young adults via job training and educational counseling. And finally, Magnus and the RPD have taken the rare step of consolidating city code enforcement and abatement divisions into the police department in order to better facilitate cooperation, under the so-called “Broken Windows” theory of policing, of which Magnus said he’s a “huge proponent.”

But all that aside, it seems that Richmond’s success goes beyond name-brand antiviolence programs and whiz-bang theories. “You see a lot of departments that are coming up with catchy acronyms, addressing crime by press release, throwing stuff out there and then it kind of fades away,” he said. “And I always say, it’s not always flashy, it’s not always going to be successful, but what we’re doing is laying a foundation.”

That means working with the large number of faith- and neighborhood-based organizations that have become a stabilizing force in the city, and engaging with the community in a way that goes beyond lip service: “All of our cops are community policing officers,” Magnus said. “We don’t make a distinction, because then really, what would the rest be?”

Magnus said he looks for qualities like empathy and emotional intelligence when hiring officers, and that he makes it clear to his staff that building relationships with the community is a priority. “If you want to get promoted in this department, you have to demonstrate a pattern of engagement with the community around proactive policing efforts, and you have to show that you’ve built relationships with the neighborhood and that you’re an approachable, engaged police officer,” he said. “If somebody tells you, in a very violent crime area, that their biggest priorities are abandoned cars or blight abatement, you have to listen to them and work on that.”

Perhaps the most striking thing about Magnus is that he isn’t a progressive ideologue, but rather a practitioner of what might be called compassionate policing, or what Zimring described as “a much more polite form of some of the same police tactics that have worked in other cities.” Although Richmond has neither a youth curfew nor gang injunctions, the police department does use some tactics that are often espoused by tough-on-crime types — like stop and frisk — albeit with a softer approach. Magnus said his goal is “engaging with the person consensually and getting their cooperation and having them come away with the feeling that they’re being treated respectfully. Because what’s the point of alienating people?”

It helps, too, that the Richmond City Council, often bitterly divided, has united behind Magnus and his plans. The council, for example, stood solidly in his corner after several high-ranking black police officers, who had once held considerable power within the department, sued Magnus and RPD, alleging discrimination. Last year, a jury voted unanimously in Magnus’ favor, ruling that he had done nothing wrong and that the allegations against him were baseless.

“We want to work with him,” said Butt. “He has a style and record. He’s a good communicator. He has really emphasized community-based policing, so you end up getting a lot more communication and support from the community.”

Comments like this highlight a stark difference between Richmond and Oakland, where the community, the city council, the city manager, the mayor, and Chief of Police Howard Jordan have historically been in open — and often heated — disagreement. But city and community buy-in aren’t the only problems Magnus sees Oakland facing as it attempts to rebuild civic trust and stanch a homicide rate that topped 130 last year — namely, the federal consent decree and the concentration of media. “There’s a point when you can almost suffocate a department into inaction and paralysis,” he said. “You scare people into inaction, into thinking the best thing to do is to keep a low profile. … You feel like you’re under siege, so you take this bunker mentality. I think Howard and his staff have some tremendous challenges to work with.

“There’s one thing I will say with as it relates to Oakland,” he continued. “When you’re in that panic place where crime seems to have spun completely out of control … there’s a tendency to throw everything at the wall. Does this stick? Does that stick? There’s a tremendous amount of pressure put on police departments to just do something: Fix it now.” But in his view, that’s not how policing can — or should — work: “When I came in I said to the city manager, ‘I’m not gonna be able to fix this overnight. This is gonna take years of work. I’m gonna need patience, I’m gonna need support, I’m gonna need resources.’ And I got all these things. So all of these processes, whether it’s Ceasefire, community policing, relationship building, other programs and services, they take a long time and are a lot of work. I like the idea of building a foundation, but there’s still work to be done.”

Indeed, said Zimring, “Eighteen [homicides] is a modern low for Richmond. Having said that, it’s still a good news and bad news story: It’s very much at the low end for Richmond, but it’s still very high in terms of measures for urban risk.” Just last week, the community was rocked when a nineteen-year-old was shot at a city-funded construction class; as this article was going to print, another young man was shot and killed while riding his bicycle in the middle of the afternoon.

“This is really not ‘mission accomplished,'” Magnus said toward the end of our interview. “You don’t just build relationships overnight. It’s a long-term process. But that’s what you have to do.”

Update: A previous version of this story incorrectly stated that the Office of Neighborhood Safety employs fifty people; in fact, it employs ten. Further, the article implied that the Richmond Police Department founded the office, when in fact it was founded by the Richmond city council and mayor.
Facebook
Twitter
Previous articleKnow the Best in Bay Area Music? Vote at Thizzler and Submit to Play Mission Creek Oakland
Next articleMid-Week Menu: A Super-Sized Blue Bottle Cafe in Oakland, a Food Truck Garden in West Berkeley, and a New C.R.E.A.M. Shop in Walnut Creek
18,637FansLike
0FollowersFollow
67,429FollowersFollow