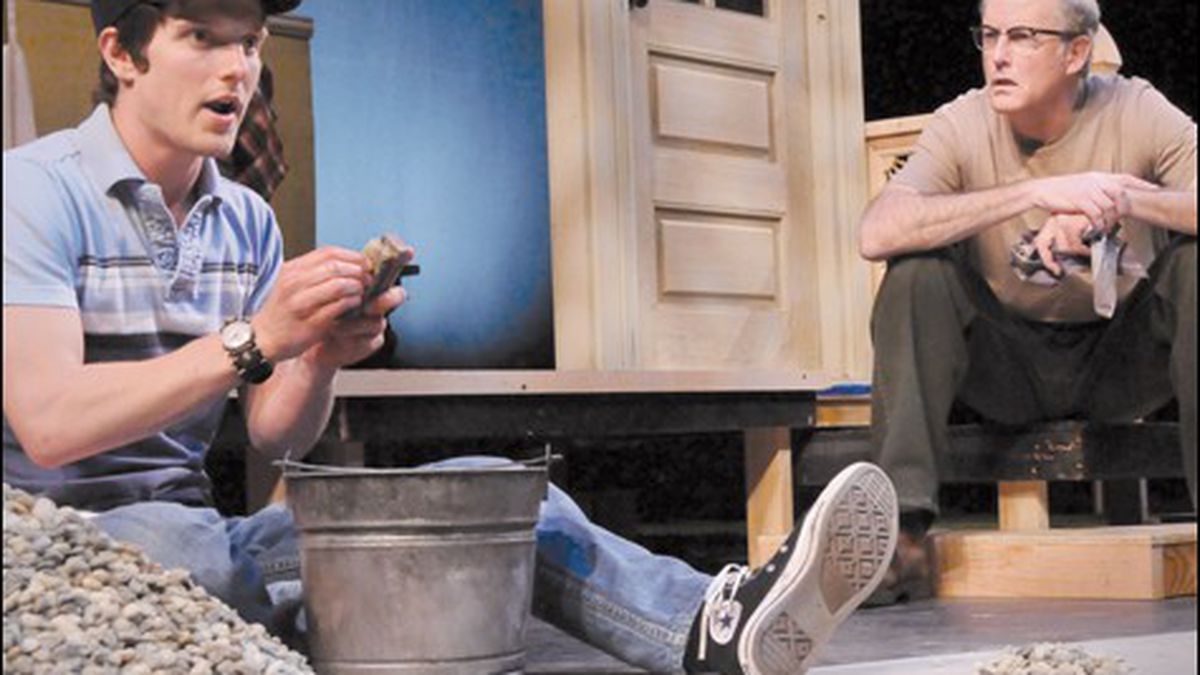 Three actors sift through the intricacies of Michael Healey's play.

Sauntering up to a small farmhouse on the outskirts of Clinton, Ontario, young Miles didn’t just look like an interloper; he looked like an alien. A fledgling actor and playwright, he’d come with the intention of observing Canadian farmers in their natural habitat. Miles planned to mount a production about rural life in Ontario, and he wanted it to bristle with naturalistic detail. To get that, he needed real-life characters to invite him into their country home. Namely, he needed ruddy-cheeked Morgan and placid, stony-faced Angus, two WWII vets who resigned to bachelorhood in Clinton in the wake of an extreme tragedy. The men form an odd triangle in Michael Healey‘s The Drawer Boy, a play that starts off with a very typical cultural tourism scenario, and turns it into a close study of Angus and Morgan’s relationship. Director Domenique Lozano puts the three characters under a microscope in her new TheatreFIRST production of The Drawer Boy, which is perhaps more dependent on bodily gesture than on line-for-line dialogue. Healey’s play is intensely theme-driven, but Lozano lets her actors take the wheel.

It’s debatable whether the stars of The Drawer Boy subscribe to method acting or character psychologizing, or the type of anthropological study that Miles attempts in the play. Whatever the case, they certainly know how to inhabit their respective roles. As Angus, Warren David Keith makes his body completely inert. He wears glasses that hang off the bridge of his nose. He is large and stolid, with slumped shoulders and a face that seems to pinch and tighten, even when he smiles. His character Angus is, in essence, the play’s tragic mute. Once a promising artist (drawer means draftsman here), he suffered a severe head injury during the war, which made him a mathematical savant with no short-term memory. Morgan (Howard Swain), his caretaker, is empathic but cruelly protective. Miles (Max Rosenak), the intruding city boy, is trim and pale.

Healey is the kind of writer who goes from the general to the particular. Thus, The Drawer Boy begins as a war between Miles and Morgan, who stand in for their respective territories. The play is set in 1972, the same year that a troupe of Toronto-based actors traveled to Clinton to live amongst real agrarian people, and mount a seminal production called The Farm. Evidently, Miles is one of them. A young liberal arts grad and aspiring commie, he arrives to Morgan and Angus’ doorstep with backpack in hand. He doesn’t know how to drive a tractor or load a bale of hay. He thinks milking a cow is tantamount to molestation. He noses about the farm like a young Margaret Mead, assiduously jotting things down in his tiny notebook. He memorizes the things Morgan says, and later commits them to print. He risks banishment by advising Morgan to look at Soviet models of communal farming. He’s cute, well-intentioned, and blithely unaware. To Morgan, he’s a major irritant.

One need not be from Canada to understand the dynamic at play here. Morgan is the proud, weathered farmworker. Miles is the city-slicker kid who waltzes in and tries to internalize the farmer’s way of life, while questioning all of Morgan’s personal credos. The tension between them seems foreordained, yet it’s hard to feel antipathy for either side. Swain inhabits the role of Morgan with such gusto that he seems almost to yank the story forward. He’s huge and controlling, with a head that lists port, and a cowlick that lists starboard. He tromps about the house in boots and overalls, consigns Miles to the most grueling chores on the farm, and plays George to Angus’ Lenny. He compares the young playwright to a dairy cow who must produce in order to survive.

Generational and social-class rifts seem readily apparent in Healey’s script, but they’re brought to bear in the characters’ sartorial choices, and in the set designed by Martin Flynn. The door to Morgan and Angus’ home serves as a portal into another world. A pile of Russet potatoes sits right below the pantry, and the shelves contain jars of snap-beans and preserves. Morgan and Angus serve each other medicine from spoons, and drink Freshie (Canadian Kool-Aid) from a pitcher. They maintain a fragile equilibrium at home. Angus bakes the bread, handles the accounts, and fixes the cold-cut sandwiches. Morgan defuses Angus’ sudden fits of hysteria, and stifles all bad memories of WWII or its aftermath. Then Miles walks in and upsets everything.

Whereas the first half of Drawer Boy centers on country-city antipathy, the second half is much more about Morgan and Angus, with Miles serving as a third wheel. Healey teases out their story gradually. Morgan uses stories to reinvent the past and control the present. Miles calls his bluff. Angus resorts to amnesia as a protective shield. Healey treats narrative as a material thing, creating stories-within-stories and plays-within-plays. Amid all that complexity, the three actors manage to balance story with character, and make their roles seem real.