Automatic for the people! 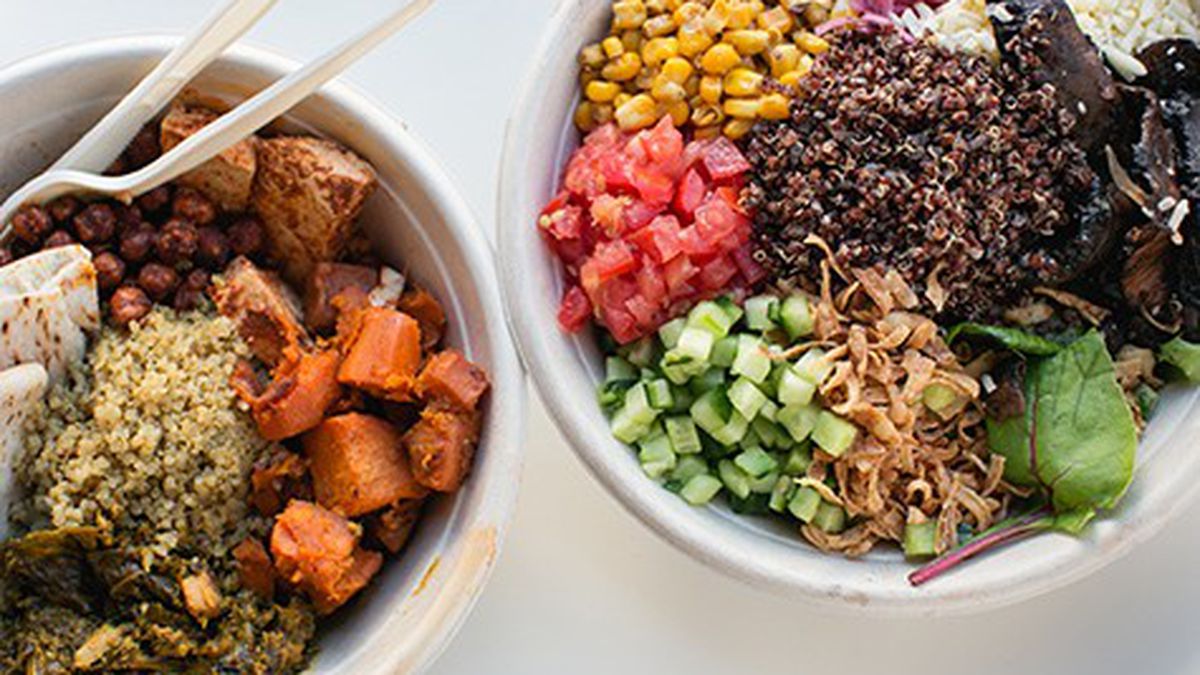 When Eatsa launched last year in San Francisco, the quinoa bowl-dispensing fast-food chain’s big claim to fame was that it was a restaurant that required no human interaction — no cashier to take your order, no waiter to make small-talk with, no actual human to put the food you’d purchased into your hands.

Instead, you place your order through a smartphone app, or by using one of several tablets mounted along the wall, and then — beep, boop, beep — the kitchen starts cranking out food. Minutes later, your selected quinoa bowl appears inside a futuristic-looking cubbyhole, whose LCD screen-equipped door slowly lifts open after you tap it twice. Cue the soundtrack to 2001: A Space Odyssey.

What would it be like to eat at such a restaurant? I imagined a serene dining room in which everyone sits at their own booth or table of one, spooning plant-based protein into their mouths in immaculate, contemplative silence.

To you, that might sound like a dystopian vision of the future. But for folks like me — which is to say introverts with a misanthropic streak — there’s real appeal to removing all of the awkward, forced social interaction that usually goes hand-in-hand with dining out.

It was mildly disappointing, then, to find out that the chain’s first East Bay location, which opened near the UC Berkeley campus in August, offers a somewhat more mundane fast-food dining experience. I’d go so far as to say that there was a lot of human interaction — at least if you go in with the expectation of “zero.” For starters, there was the “concierge,” aka the store’s one human employee that customers actually see. The friendly young woman greeted me at the door and offered to help me navigate the rather self-explanatory tablet-based menu, then scurried back into the inner sanctum of the kitchen to retrieve my food during my first visit, when I accidentally ordered too many quinoa bowls to fit into one of those cubbies.

The Berkeley outlet is also tiny and has just a single counter seat by the window, so it is essentially a takeout-only restaurant. (Pro tip: The thing to do is grab your food and walk a few steps onto campus proper, where you can enjoy your picnic lunch on the steps in front of Sproul Hall.) And because Eatsa is popular among Cal students, the restaurant actually feels quite noisy and crowded much of the time.

Anyway, according to Tim Young, Eatsa’s CEO, the lack of human interaction at the restaurant is more of a side effect than the main focus. When he and co-founders David Friedberg and Scott Drummond — all of whom come out of the tech startup world — first started talking about opening a restaurant, their goal was to figure out a way to serve tasty, nutritious food at a price point that would be accessible to the broader population of “people who can’t afford the $15 salad.” Hence the decision to base the entire menu around quinoa, which as Young will tell you, is what nutritionists call a “complete protein,” replete with all nine of the essential amino acids needed for a healthy diet. Meanwhile, the grain’s flavor-soaking properties make it easy to adapt to a variety of different cuisines.

The decision to minimize human interaction came out of the company’s research into ways it could streamline the restaurant experience and make it more convenient — i.e., getting rid of the lines. The cubbyholes were inspired by the automats, or vending-machine restaurants, that were popular during the early 20th century. And of course, the reduced labor costs from not having to hire multiple cashiers or servers also means the restaurant can pass some of those savings onto the customer.

Once you strip away all of the techspeak and space-age trappings, what Eatsa offers, at its core, is an affordable lunch that’s healthier and, for the most part, better-tasting than many of the grab-and-go options out there. The base price for each customizable quinoa bowl is just $6.95, which seems outlandishly cheap even by fast-food standards. Same goes for the $0.95 that the restaurant charges for its selection of fizzy, low-sugar, fruit-infused drinks and iced teas.

And while I didn’t have the highest expectations, I was surprised by how filling and reasonably tasty the quinoa bowls were. The foundation of each bowl is, of course, a hefty scoop of quinoa, which contributes a mild nuttiness and a pleasant texture — fluffy, with a bit of a bite. To this base, Eatsa adds a generous portion of complementary (and all-vegetarian) toppings to the mix, usually based around some broad ethnic or regional theme. There are eight different quinoa bowls total, both cold and hot, on the current menu.

One of the better bowls was the Smokehouse Salad, which combined slices of portobello mushroom, grilled corn, crispy onion strings, and white cheddar with a lightly smoky barbecue ranch dressing. The Bento Bowl, served warm, featured edamame, crispy wonton strips, more of that portobello — this time seasoned with miso — and a thick cylinder of tamago-style egg omelet. For drizzling on top, there was a teriyaki dressing that was tastier, and much less sweet, than I expected.

Put it this way: At worst, Eatsa’s bowls resemble the kind of meal you might assemble for yourself in the prepared foods section of a Whole Foods Market — but of a slightly better quality and for a slightly lower price. Certainly, that’s true of the cold salads.

But the hot quinoa bowls are where the restaurant sets itself apart. My favorite was the tomato-based “Chili con Quinoa” — the rare vegetarian chili that wasn’t composed almost exclusively of beans. Here, the quinoa was a stand-in for the meaty texture of ground beef, and the chili itself was surprisingly spicy, hitting all of those warming, comfort-food notes you look for in a bowl of hot chili.

Another winner was the Indian-inspired “Spice Market Bowl,” which was packed with more flavor and texture than you’d ever expect to find in a quinoa bowl, thanks to the inclusion of roasted yams, saag paneer (fairly traditional, though I suspect it was made with curly kale), crispy fried chickpeas, and wedges of pita bread.

All that said, some of the cold salads are better if you think of them as light lunch fare rather than a dinner in and of themselves, despite the relative generosity of the portions — particularly if you choose a bowl that lacks a hearty protein. The “Mediterranean” was the most uninspired of the options I tried: cucumbers, tomatoes, and kalamata olives in a blandly neutral dill-yogurt dressing. And some of the “ethnic” elements are fairly slapdash: pita bread and “tandoori tofu” in that Indian bowl?

The easy joke, of course, is that Eatsa’s kitchen is operated by quinoa-making robots — a conceit that Eatsa’s founders disavowed during its pre-opening PR push. Young, for his part, assured me that each quinoa bowl is cooked and assembled to order by a real live human. But exactly how many cooks are working in the kitchen at a given time, and what exactly it is that they do, is veiled in a certain amount of secrecy. I asked Young — three times! — whether he could tell me anything about how Eatsa cooks the quinoa without giving away the company’s proprietary secrets, and the best he could do was say that it’s some combination of new technology and traditional cooking techniques. If you want to believe that robots really are the ones doing the cooking, who am I to tell you otherwise?

Co-founder Friedberg has said in interviews that he eventually wants to put Eatsa outlets in shipping containers that can be dropped into economically depressed areas that lack healthy food options. While I admire the sentiment, part of me does wonder how Eatsa’s model will translate outside the context of busy tech workers and cash-strapped — but also sustainability-minded — college students. At the end of the day, might a quinoa bowl still be too wholesome a product to resonate with that McDonald’s or Taco Bell customer? After all, for me, the defining image from my visits didn’t have anything to do with the futuristic service model. It was a girl in full workout attire, sprinting out of Eatsa full-speed with her quinoa bowl tucked under her arm.

Next ArticleThe End of the Oakland Fence Saga