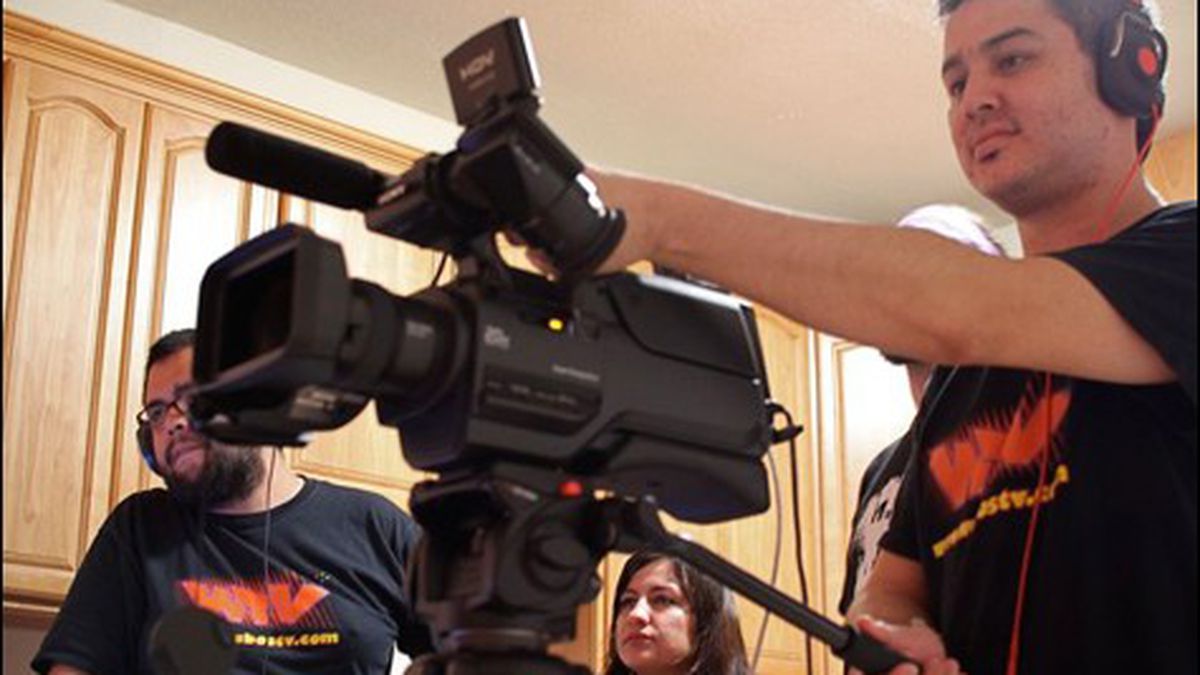 Viewed on its live Internet stream, the public affairs show could be filmed anywhere. The set consists of no more than a black background. The young hosts who banter between video segments — like the guy in plaid skater shorts and shades, or the one with a thick beard and purple bandana over his ponytailed tresses — could have been plucked from a college campus or an anti-war rally.

But gleaned from the content of the hour-long weekly program, this much is for certain: they are somewhere in the Bay Area. In fact, it can appear at times that they are everywhere in the Bay Area at once. That’s because, for the past year, the small crew of Webos TV has adopted a beat so vast and promising it has practically become a full-time job for the volunteers behind it: Latino culture in the Bay Area.

If you’ve attended any arts event representing the Spanish-speaking world lately, spanning the gamut from the Mexican classical conductor Alondra de la Parra‘s appearance with the San Francisco Symphony in Dolores Park to the Monterrey DJ heavyweight Toy Selectah‘s gig at an East Oakland warehouse party, chances are, so did Webos TV.

“These guys are at every single event that’s worth videotaping,” said Jason Wallach, events coordinator at the Mission Cultural Center, who began noticing the bunch around town early this year. “So I was like, who the hell are these people?”

It’s a fair question. You’d expect a TV crew with the technical knowhow of these guys and the caliber of equipment they lug around — a few HD video cameras and professional microphones with Webos TV flags on the handle — to be from somewhere. Like MTV, or Univision; some place with studios and advertisers, and the kind of name recognition that would garner backstage interviews.

Instead, they are from Webos TV; better put, they are Webos TV. They have no advertisers. Their studio doubles as the living room of the engineer’s West Oakland home. And most people have no clue who they are. Not yet, at least.

A bilingual play on words, Webos is pronounced like the Spanish huevos (WHEY-bos), or eggs. On Mexican streets it also carries the vulgar connotation of balls, or of opposition. Spelled in English, you get web, the program’s sole outlet. “Let’s do something against the mainstream,” 26-year-old founder Jesus Contreras explains of its meaning, “and say, fuck off, we are going to do what we want, and no one is going to say anything, because we are the ones who produce it.”

If his words sound brash, you must understand — not long ago, Contreras was a part of that mainstream. He worked for Televisa, the largest media conglomerate in Latin America. What should have been a dream gig for a twenty-year old Mexico City communications student turned out to be a disturbing introduction to the media industry. As a cameraman for the program, Expresión Juvenil, his job was to film, day in and day out, the tryouts for what was essentially Mexico’s low-budget version of American Idol. “Really bad kids singing” is how he describes it. “Pretty much all of them sucked.”

Webos TV, whose shows are broadcast live on WebosTV.com, and video segments archived on YouTube, could not be further from the saccharine and scantily-clad fare of Televisa. The six-person crew consists of like-minded friends who, thanks to unemployment or utter passion, sacrifice most of their nights and weekends to filming around town, then editing the interviews for the weekly Tuesday night show.

“Welcome to our house,” says Webos’s co-founder, 26-year-old Marco Verduzco, after he unlocks the rod iron gate of a Victorian house near West Oakland BART, and walks a visitor up the stoop, past the bikes parked at the bottom of the stairs. “And to our living room, to our studio.” In the middle of the living room floor sits a tripod grasping a shotgun microphone, pointing toward a black sheet stretched out before an alcove. The studio sprawls into the kitchen, where a large Sony camera atop a tripod makes for a tight squeeze between the two rooms. A couple of iMacs, a sound board, a DVD player, and an assortment of other sleek electronics share space on the kitchen counter with cans of Tecate and glasses of jug wine. Unperturbed by the production that’s taken over her first floor, a roommate they call “Cookie” prepares a quesadilla on the stove.

It’s five minutes to show time, though no chaos or pressure ensues. Just questions about what they will chat about on air in between segments of footage they recorded the past week. There will be a discussion of recent elections in Venezuela (and the affirmation of support for “Papa Chavez“), mention of an upcoming fund-raiser for victims of recent floods in Veracruz, and a rundown of events Webos TV will be covering in the coming week.

If Christian Slater‘s pirate radio host of Pump up the Volume were around today, you can imagine him joining this operation. Like the mobile transmission pursued by the FCC in that 1990 cult classic, Webos is fueled by tech savvy, a disdain for the status quo, and a passionate commitment of the group to use their medium for the good of their community.

When the show begins, Contreras updates the Facebook and Twitter feeds to his audience. Viewers can comment in the chat box that accompanies the online player, but only a few insiders chime in. Live viewership ranges from a handful to, well, a few handfuls. One could easily cast off the Webos crew as just some more under-employed Gen Y-ers with a video camera in need of an audience, separated only by some expensive equipment from everyone else who uploads concert videos to the web, but for the impressive list of interviews they’ve amassed in a short period of time. Tonight’s show includes an excerpt of an extended conversation with the Afro-Peruvian Grammy-winning diva Susana Baca. Chilean rocker Chico Trujillo, Tijuana electronic group Nortec Collective, and Colombian nu-cumbia group Bomba Estereo are just a few of the Latin American stars that have granted interviews and permission to record their shows, not to speak of the local artists, theater troupes, and musicians who have been profiled on Webos.

There’s one good reason that access is so easy to come by for a guerrilla TV channel few have ever heard of: No one else is asking for it. Aside from a few Spanish language media outlets like El Tecolote out of the Mission District, and radio shows like Ritmo de las Americas on KPFA, the local Latino arts scene flourishes, for the most part, outside of the media spotlight. A video crew with the online skills to promote the scene is a welcome addition. “They’re catching up local coverage of Latino arts to where it should be,” says Wallach of the Mission Cultural Center. And that’s something the Televisas of the world have shown no interest in.

“Essentially, we have to wait for the socially acceptable Latino events for the mainstream media to show up,” he said. “Day of the Dead is an important holiday in Mexico, but we’re here year-round.”

Another Way to Occupy: Join a Credit Union

Dark Night of the Stole