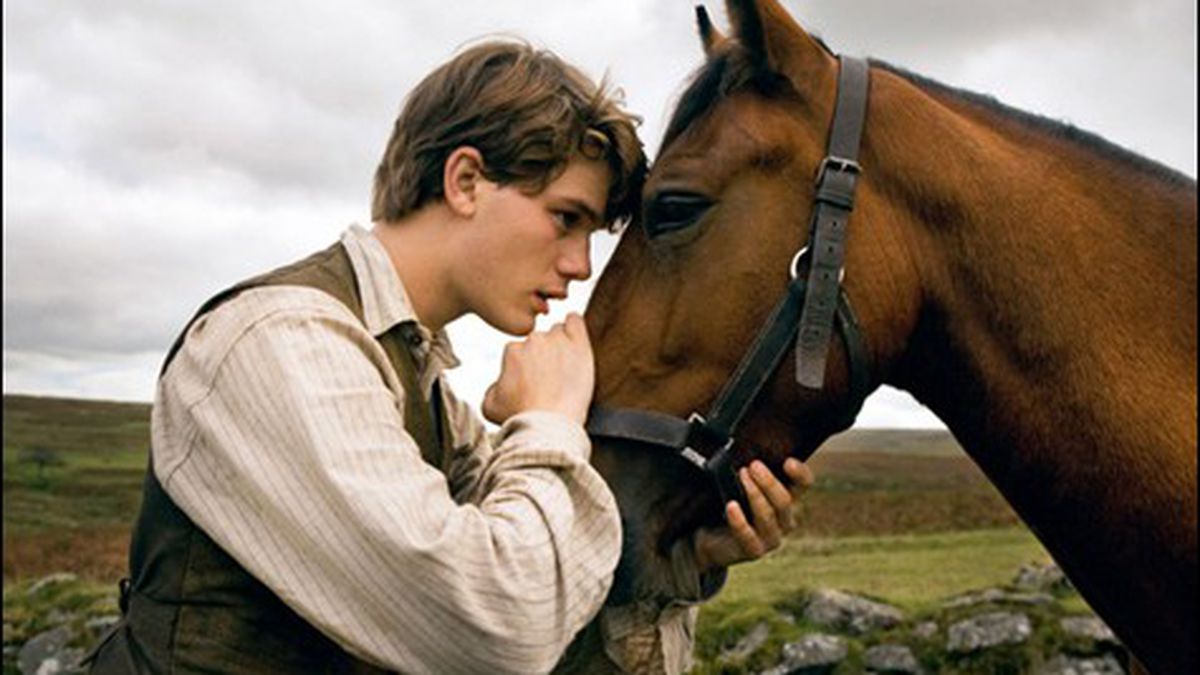 War Horse has been on local screens for about two weeks, but because of the usual holiday new-release traffic jam we’re just getting around to it now. So here are a few late notes on the second — and lesser — of the season’s two Steven Spielberg-directed movies. Why do we care about it? Because it’s Spielberg.

Diary entry: It builds slowly, starting with a few snickers in the film’s second half and then rising to a dull crescendo amongst the auditorium full of critics in a downtown San Francisco multiplex. Groans, snorts of derision, self-conscious guffaws. Reviewers are here for a preview screening of War Horse with no freebie “professional contestants” allowed, only working press and invited guests. The natives are sharpening their knives.

The thing that really sets them off is the last scene, the one in which young soldier Albert Narracott (played by Jeremy Irvine) returns home from France to his parents’ farm after World War I, accompanied by his long-lost, four-legged best friend Joey. Joey has been through hell but Albert has no way of knowing that. The only thing that matters is that Mum and Dad (Emily Watson and Peter Mullan) have finally got their son and his “Miracle Horse” back.

Spielberg obviously went to great pains to stage this reunion in full 1939 MGM style, from the artificial-looking farmyard to the Gone with the Wind red sky. The film climaxes in a sort of group grope slathered with whipped-creamy John Williams string music. We keep expecting to see the juvenile Elizabeth Taylor and Mickey Rooney pop their heads into frame. Hoots burst from the corners of the room and the most vocal audience members depart, leaving everyone else to quietly ponder the broad avenues and secret byways of Spielberg’s sensibility.

A little corn every once in a while can be a good thing. Spielberg and screenwriters Lee Hall and Richard Curtis (adapting Michael Morpurgo’s novel of the same name) approach the boy-and-horse scenario straight-on, as a young person’s adventure yarn with all the trimmings. And for three-quarters of the movie it rouses what we consider to be our purest adolescent instincts without stepping in too much horseshit. Hard-working Devon farm lad Albert recognizes Joey for the brave, stout-hearted thoroughbred he is, even though old Ted — why is Mullan always cast as a drunk? — obviously paid too much for a plow horse. Mum is so sweet she makes Jane Darwell seem like the Wicked Witch of the West. The lighting and scenery are unnatural, with intentionally stagey-looking CGI. Meanwhile, there’s the insulting landlord Mr. Lyons (well cast David Thewlis) waiting in the wings for his rent.

We can’t help wishing Ken Loach had made this movie. But then we’d miss out on the sorrow-drenched Spielbergian spectacle: limbs flying in the air after an artillery round hits the British trench a few yards down; the groan-inducing shot in which the windmill blade obscures the execution (for desertion) of Gunther and Michael, Albert’s German counterparts (David Kross and Leonard Carow); the sight of weary Joey pulling a big gun up a muddy hill; the nice old Belgian jam and jelly maker (Niels Arestrup) and his granddaughter Emilie (Celine Buckens) getting their home ransacked by Huns, etc.

If Spielberg can’t show absolutely everything his mission is incomplete. Joey makes the arduous wartime rounds from master to temporary master. We begin to wish that Robert Bresson had made this film, so that Joey could actually earn a little of the pathos the filmmaker heaps on his back. The saintly donkey in Au Hasard Balthazar went straight to movie-animal heaven without half the sturm und drang. Poor Joey always seems to be overacting, even though the best scenes in the film — including the stunning “cavalry charge” and “no-man’s land” sequences — have more to do with directorial bravado and special effects than with equine heroism.

Of course, Loach and Bresson never had to contend with the expectations Spielberg faces every time he attaches his name to a project. War Horse will never make anyone forget about Kes or Balthazar, let alone All Quiet on the Western Front or Paths of Glory or The Big Parade or Sergeant York or Joyeux Noël or Charlie Chaplin’s Shoulder Arms, but none of those films was made to compete in the marketplace Spielberg finds himself the king of. As before, his exalted middle-class American consumerism runs into trouble overseas and instinctively reaches for “classical-Hollywood” motifs. But the magic talismans lose their potency. Too much is never enough.

Coliseum Authority Approves Another One-Year Lease for Raiders in Oakland