Located behind the Bank Club in Emeryville, the Mediterranean restaurant has become the obscure find that everyone loves to discover. Don't miss out. 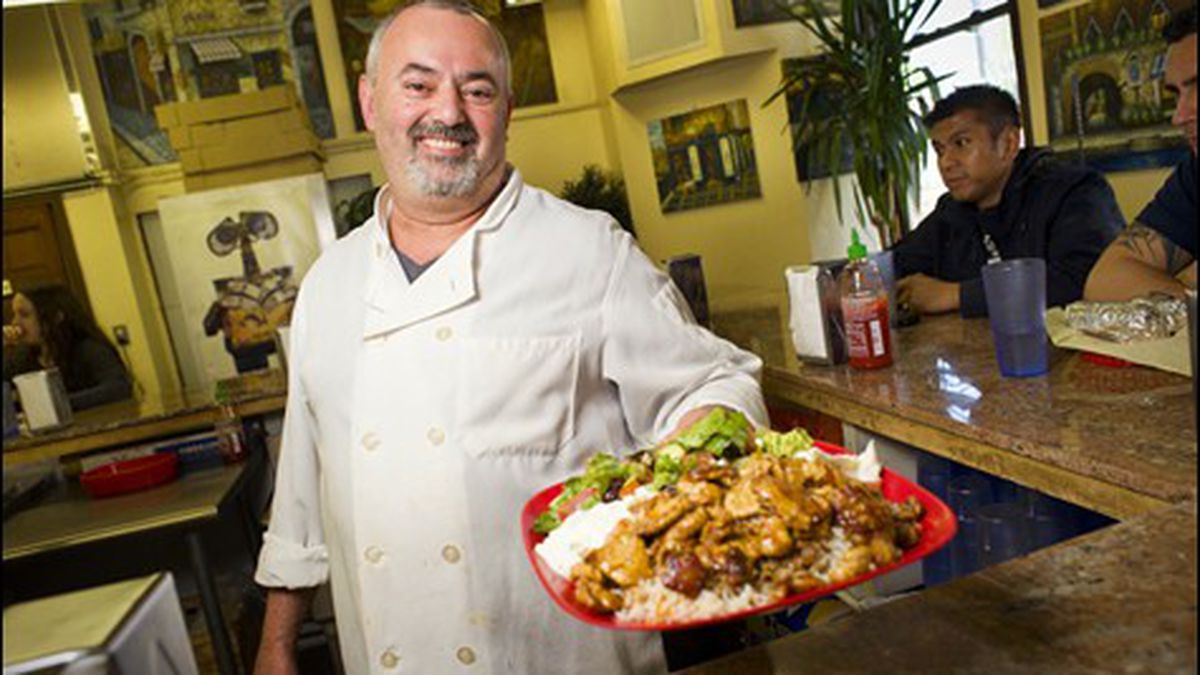 Studying the crowd at Wally’s Cafe called to mind a recent article in New York magazine. Titled “When Did Young People Start Spending 25% of Their Paychecks on Pickled Lamb’s Tongues?”, it skewers an emergent young foodie class and its borderline-manic approach to dining. The article’s subjects bleed their bank accounts for quail confit and truffle poutine. They judge others harshly for lack of insider restaurant knowledge (one girl dumps her boyfriend when he chooses a lame dinner spot). And they all spend unhealthy amounts of time hunting for offbeat, under-the-radar dining destinations.

Let’s review some of its enticements. 1) Off the beaten path: Squirreled away among Emeryville’s endless condos and big-box stores, Wally’s is next to impossible to find unless someone tells you exactly where it is. 2) Grit: It’s wedged in the back room of a roadhouse-style dive bar, where regulars are known to make catcalls and give you the side-eye. 3) Secrets: The savvy insider can order off-menu tamales and tilapia from the owner’s Mexican wife. 4) Food: Oh yeah, apparently Wally’s is good.

Given all these factors, I should have seen it coming: the self-conscious iPhone picture-snapping, the loud braggadocio of how people discovered Wally’s (“It’s totally funky!”), the jockeying for a counter spot. I was unprepared, but no matter. My goal was to rise above the ambient background noise and judge Wally’s on its own merits. Just because there’s wankers at a concert doesn’t mean the band won’t rock. Right?

Wally’s shares space with the Bank Club, a former gambling parlor that somehow ignored the rest of the block’s development. It long pre-dates the nearby dog salon, the interior design store, and the Avalon housing complex. But this is no sad barfly way station; the red-lit bar often hosts a rowdy, unpredictable platoon of regulars whooping it up. On my first visit, two patrons sharing a joint stood sentry at Wally’s entrance.

Swing through the bar if you want to grab a beer for dinner; otherwise, proceed through the side gate and enter Wally’s near the back of the building. The interior space is hospital-white, compact, and clean. Without explanation, paintings of Italian street scenes adorn a few walls. There are no tables, just a U-shaped counter and twenty wooden swivel seats. Growling blues guitar or rump-thumping bass — depending on whose dollar is in the jukebox — blast in from the bar.

Every meal at Wally’s starts with a free bowl of lentil soup, served by Wally himself, his wife, or his son, with a retreating smile and a nod. That’s the hook. It’s much easier to tune out your surroundings after you start spooning up warm, soothing broth loaded with shredded carrots, spinach, and a soft garlic kiss.

Dinner plates were piled high, proffering enough possible leftovers to pull you through an extra meal or two. Next to the standard-issue side salad sat a large mound of fluffy basmati, nimbly cooked with a hint of garlic and onion. Far from a boring starchy filler, Wally’s rice sometimes upstaged its accompanying entrées. The beef shawarma, for instance, was by-the-numbers and not very tender. The grilled kafta kebabs were mushy little cigars with an overpowering wallop of cinnamon.

Only the tart chicken pomegranate, tender white meat flavored with a fragrant and subtle fruit-and-spice blend, was a showstopper. Complex new taste memories were fleshed out on the spot. This one (as with all of Wally’s chicken dishes) was served with a potent dish of raw garlic skordalia dip, sure to dash hopes of later intimacy.

Matar says the Chop Chop chicken liver sandwich has die-hard followers, but it may be too much for the uninitiated. Served on a simple grilled panini, the heaping pile of liver was earthy and intense, brightened with a spritz of lemon and some romaine crunch. But truly, there’s only so much offal you can handle at a time; this one took three meals to finish.

Free Lebanese baklava ends every meal at Wally’s, a complementary bookend to the lentil soup starter. Made with pistachios and cashews and sweetened by a light orange-blossom syrup, this flaky wonder is a far cry from its dense, honey-thick Greek cousin. The first little slice was a gateway drug; I bought extra pieces on both my visits.

Does Wally’s justify its place in the canon of faux-secret Bay Area gems? It certainly wins oddity points: its curious contrast with the Bank Club alone justifies a visit. The owners are kind and their freebies are a sweet enticement. Prices aren’t bargain-basement, but the portions are quite generous. I’ve heard good things about the tamales and other off-menu items made by Matar’s wife, but, sadly, she wasn’t serving any during my visits. And the regular menu items ranged from decent to quite excellent.

So, yes, by all means, try Wally’s out. But if you’re looking to impress your amigos with an esoteric local find, the toothpaste is already out of the tube on this one. I stopped in on Monday and Tuesday nights, and Wally’s had lines of people waiting for my seat on both visits. Annoying crowds really shouldn’t discredit your dining experience, and I trust you’re all strong enough to not be bothered. Just try to resist tweeting until you leave.