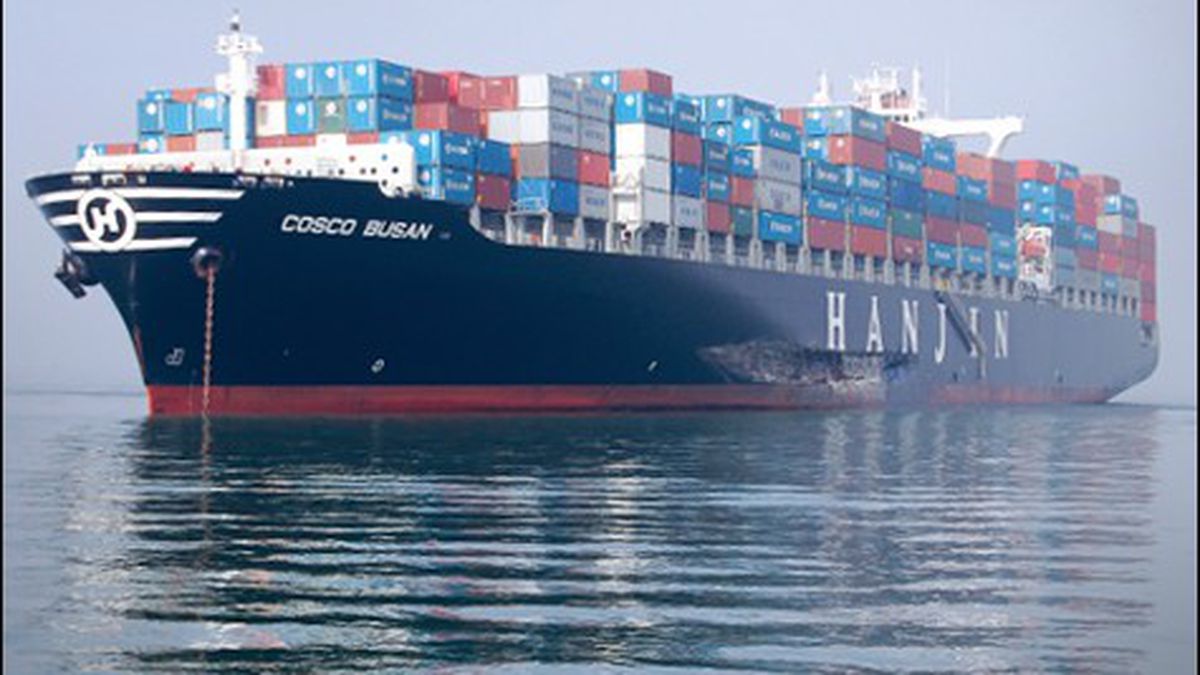 Waiting for the Next Oil Spill Disaster

Environmentalists say that six years after the Cosco Busan struck the Bay Bridge and dumped 53,000 gallons of oil into the bay, the state has failed to learn from its mistakes.

By sunset, the tanker had delivered its cargo of crude petroleum to a North Bay refinery and was passing underneath the Golden Gate Bridge en route to its next port of call in Ecuador. Then, just past the bridge, as the ship made its way through the bay’s neck, the engine froze and the electrical system failed. Without power or steering, the tanker drifted toward the rocky cliffs of the Marin Headlands. The captain knew the water in the straight was too deep to drop anchor, so he ordered his crew to lower the starboard anchor only partially, hoping it would catch in the shallows near shore and stop the ship from running aground and spilling the contents of its fuel tanks.

Onlookers on the bridge braced for disaster as the ship came within meters of Point Diablo. “The whole tanker spun around and almost nosed into the point,” one witness told ABC7 News. But the captain’s swift action worked, and just ten minutes after the power cut out the ship stopped.

“It’s a miracle that nothing happened,” said Amy Trainer, an environmental activist who’s been researching Northern California’s oil spill prevention infrastructure for months. The Overseas Cleliamar, as the 38,000-ton vessel was named, was one of 130 tankers that navigated the San Francisco Bay in January 2009. Between the oil refineries and the busy Port of Oakland, the San Francisco Bay sees hundreds of vessels carrying hundreds of thousands of barrels of oil each month. Given the numbers, Trainer and other environmentalists are worried that it’s just a matter of time before there’s another spill — and that the state isn’t prepared to deal with it.

As the executive director of the Environmental Action Committee of West Marin, Trainer is part of a coalition of a dozen environmental groups that’s urging state officials to beef up California’s spill prevention efforts and response plans. The coalition penned a letter to the top brass at California’s Office of Oil Spill Prevention and Response (OSPR) and other regulatory agencies in August. The groups claim the contingency apparatus in Northern California doesn’t meet state law and worry this will lead regulators to default to chemical dispersants if there’s a spill.

After the 1989 Exxon Valdez spill and the American Trader spill the following year in Southern California released a combined 11.3 million gallons of crude oil into the Pacific Ocean, California passed legislation to protect state waters. The Lempert-Keene-Seastrand Oil Spill and Prevention Response Act mandates the “best achievable protection” of coast and marine waters using the “best available technology.” But Trainer’s coalition, which includes the Sierra Club California, the Surfrider Foundation, the Center for Biological Diversity, and a number of fishing groups, contends the state is relying on out-of-date technology to deal with major oil spills. “This is California — we’re a center of emerging technologies, we’re supposed to be leading the way,” Trainer said. “Instead, we’re years behind and that has to change.”

Lawmakers passed new legislation to improve preparedness and response after the Cosco Busan struck one the Bay Bridge’s towers and spilled 53,000 gallons of oil in 2007, but the near-disastrous Overseas Cleliamar incident two years later, and a close call in January of this year in which a tanker scraped the bridge again, are proof there’s more to do, Trainer said.

She’s especially concerned because the bay saw an increase in the number of instances in which vessels lost power off the coast after the California Air Resources Board started requiring ships to switch fuel types in state waters in 2008. At sea, tankers and cargo ships use heavy bunker fuel, because it’s the cheapest fuel available. But when burned, the sulfur-rich petroleum product releases chemicals linked to childhood asthma and chronic respiratory problems. So to protect public health, the air board adopted regulations requiring ships to switch to a low-sulfur fuel that’s less polluting. The new rules have been a boon to California’s air quality, but they also inadvertently increased the risk of oil spills.

As one longtime captain explained it, many older vessels that are still in use weren’t built to run on the less-viscous low-sulfur fuels that California requires, so the fuels can cause leaks, pressure loss, and other problems that lead to mechanical failure. And whenever a vessel loses power, there’s a risk of a spill. Instances of propulsion loss rose 150 percent from 2008 to 2009 and have stayed at a rate more than double the rate of the years before the regulation went into effect. The near-grounding of the Overseas Cleliamar is thought to be linked in part to the use of low-sulfur fuel.

To protect marine resources, Trainer’s group is advocating a number of reforms: Among other things, it’s pressing for OSPR to create a system for rating the cleanup equipment used by the private companies that contract with ship owners for spill response, and for OSPR to make shipping companies help pay for more advanced cleanup and prevention technology. Chris Jones, a consultant who works with Trainer, points out that the Bay Area doesn’t have a tugboat dedicated to preventing or responding to spills. In Alaska’s Prince William Sound, where Jones helped design prevention and response plans, there are specialized tugs that include equipment like boom (the floating barriers used to contain oil) skimmers, and storage space for recovered oil. They’re also equipped to deal with fires and powerful enough to tow a loaded tanker in rough sea conditions. Currently, harbor tugs operate only in San Francisco Bay, Jones said, and he doubts their ability to aid a ship in the hairy conditions outside the Golden Gate.

Partly in response to the coalition’s pressure, state Assemblyman Mark Stone convened the Committee on Coastal Protection in late August for a hearing on the state’s oil spill response preparedness. Stone’s district encompasses the Monterey Bay, and he has a longstanding interest in coastal protection. Shortly after he took the stand at the meeting, OSPR administrator Thomas Cullen addressed one of Trainer’s key concerns: “We continue to hear recommendations that we need to exercise spill response capabilities … seaward of the Golden Gate,” he said, pausing to look up at the committee members. “We feel that this is unnecessary and could increase the risk of an incident.” He went on to explain that disrupting a ship’s progress when it’s headed into or out of the bay is dangerous.

But for Jones, that’s the point: Because the area beyond the bridge is congested and currents can be treacherous, there’s a heightened risk of spills. And if response crews are not practicing rescue and cleanup efforts in those conditions, they won’t be prepared when there is a spill. Jones looked grave as he read his testimony during the hearing, glancing up at the committee as he drove home his point: “What you do not drill you simply do not have,” he said of the training needed to properly respond to oil spills.

Jones and Trainer worry that a lack of emergency drills and mechanical infrastructure will leave responders little choice but to rely on chemical dispersants. While Cullen told committee members, “We do not see dispersants as a silver bullet for oil spill response, nor would we ever see dispersants as substitutes for mechanical response technology,” the activists see a lapse in his logic. “From our perspective,” Trainer said, “the fact that they aren’t drilling out there means they’re totally unprepared to do a mechanical recovery so they would rely on dispersants.”

The growing body of data on the environmental and human health impacts of dispersants amassed since the Deepwater Horizon spill has led to criticisms of their effectiveness and toxicity. “If the worst should happen and a tanker loses most of its content, we’re going to be spraying this stuff so quick,” Jones said. “The American public has been fooled by the industry.” Arguing that the oil industry has pushed dispersants because they minimize cost, he points out that Corexit, the dispersant used by the hundreds of thousands of barrels in the Deepwater Horizon spill, is manufactured by a company with close ties to BP and Exxon. “This stuff is snake oil,” he said.

Ron Tjeerdema, a professor of environmental toxicology at UC Davis who spoke at the hearing, offered a measured view of the chemicals. “It’s ideal for nature to disperse [oil],” he said, “but sometimes that means resources would be damaged. For some species dispersed oil is more toxic, for others undispersed oil is. It’s equally toxic to others. We have to decide which species we want to protect because no single tool can protect all species equally.”

But if OSPR is going to help protect anything the agency needs funding. Perhaps the most pressing issue prompting Stone’s hearing is the state of the Oil Spill Prevention and Administration Fund, OSPR’s source of money. The fund faces an estimated $3.8 million deficit for 2013, Cullen told the committee, and while his agency is still meeting its central mission, several of its important mandates are unfunded or underfunded. Studies to improve oil-spill response, local equipment grants and local volunteer training programs are all lacking, he said, and the Oiled Wildlife Care Network is in jeopardy. Cullen blamed inflation and rising program costs for the deficit.

California’s oil spill preparedness infrastructure is funded primarily by a per-barrel fee, currently set at 6.5 cents, on all crude oil entering the states. In January 2015, the temporary fee increase enacted in 2011 will sunset, dropping the fee down to 5 cents. The result, Cullen said, would be a $7 million deficit. He told the committee that every penny increase to the per-barrel fee provides an addition $5 million in revenue and recommended an increase to 7.5 cents. “We are actively working on more sustainable funding options,” Cullen told the committee, though he didn’t elaborate. The state Assembly had been weighing a bill, AB 881, to increase the fee to 7 cents, but it failed to get out of committee before the end of this year’s legislative session.

In an email statement, Stone called the hearing a positive first step toward improving the state’s ability to respond to a spill. “The experts have weighed in to say that we need to ensure that the state appropriately funds cleanup activities before there is a spill disaster,” he wrote. “I am committed to finding ways to ensure that we’re able to do so when the Legislature returns to session in January.” Stone’s legislative director suggested the assemblyman might introduce legislation then, but for the next three months he and his staff will focus on research.

“Spill response in California is complicated,” said Alexia Retallack, a spokeswoman for OSPR. “We are constantly looking for opportunities to improve our strategies. Is there more? We believe we can always do more,” she said. “But we’re doing the best we can.”

For now, Californians will just have to hope that’s enough.

Our top DVD picks for the week of January 16: