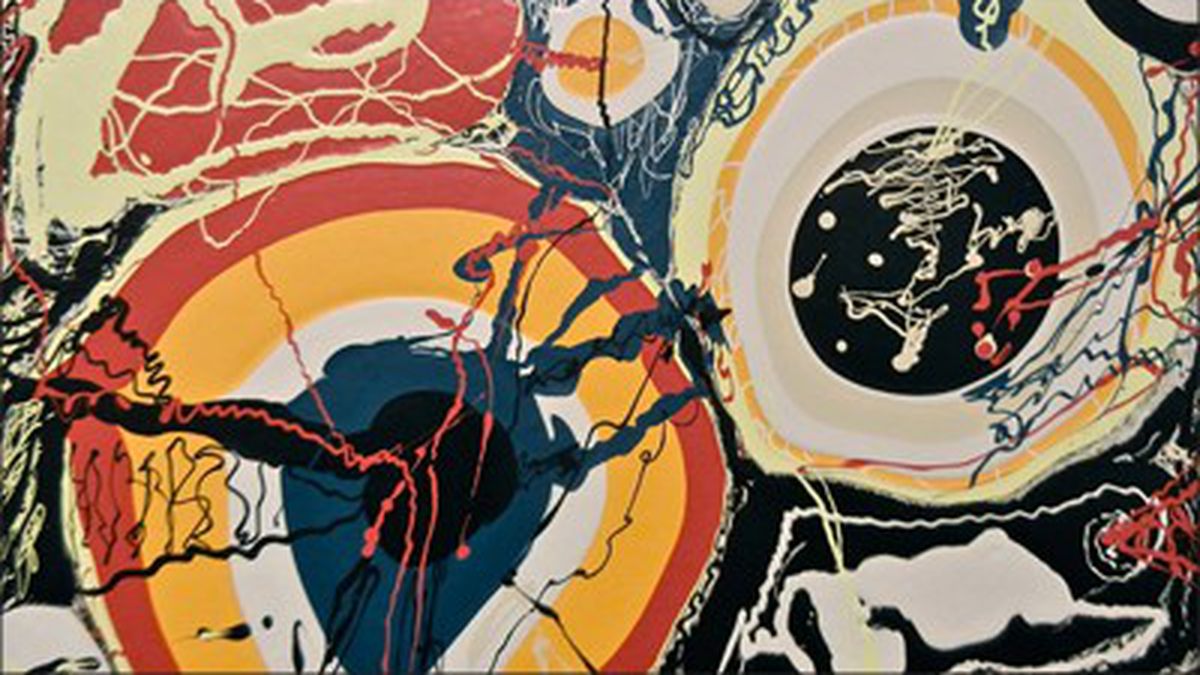 His splatters and pools of paint mutate abstract expressionism.

Comparing visual art to music is bound to get a bit awkward. After all, one is immaterial, existing in the flow of time; the other is crucially material, frozen in space. Whatever your talent for metaphor, these fundamental differences are going to crop up.

Yet some art pushes the process of its making to the fore in such a way that it does seem to exist in time, demanding interpretation through the language of beat, rhythm, melody. Victor Cohen Stuart’s latest work, now at Slate Contemporary, is a vivid example.

Since arriving at Berkeley from the Netherlands in the 1960s, Stuart has careered from abstract sculpture to figurative painting and finally to abstract painting — drips and splatters reminiscent of Jackson Pollock’s or Mark Tobey’s midcentury modernism.

Recently, the artist introduced a significant new component to his process: pooling latex enamel paint in puddles ranging in size from egg yolk and frying pan, allowing them to dry and then adding additional pools on top. Lightly flicked drippings of paint seem to flow in staticky canals through and around these globular accumulations, which, even without knowledge of how much waiting time their formation requires, appear sluggish by comparison.

Charged by this perceived interplay of varying tempos, the canvases come to feel positively rhythmic, melodic — it’s hard to describe it any other way. Even the color palette, a brilliant array of purples, blues, yellows, and pinks, seems to introduce timbre to the compositions.

But, as prophesied, at a certain point the music comparisons must come to a screeching halt: Stuart’s latest series of paintings is his most sculptural to date; these are emphatically material objects in space.

Stuart has been using thick canvases for some time, allowing his splatters to trickle down their sides to create wrap-around paintings. He also sometimes throws paint while the canvas is vertical, causing drips to harden, tooth-like, along the canvas’ bottom edge. However, whereas previous work, some of which is also included in the present exhibition, contains gradations that can give the illusion of forest-like depth, the 2012 series is decidedly literal. Try for a representational interpretation of the paint pools and you would be unlikely to come up with anything except perhaps psychedelic fried eggs or melting LPs. Adding discernable thickness to the canvases, the pools give the paintings a topographic texture and bring them decidedly into the real space of the viewer.

If Stuart’s last exhibition at Slate Contemporary, in 2010, raised questions about how to relate the artist to abstract expressionism, this new set yields a clear answer: He’s not interested. At once graphic, sculptural, and, yes, musical, these new works would not be welcomed at any modernist party — they’re too interesting for that.

No Cal Students on City Council

Robert Bobb Is a Tease