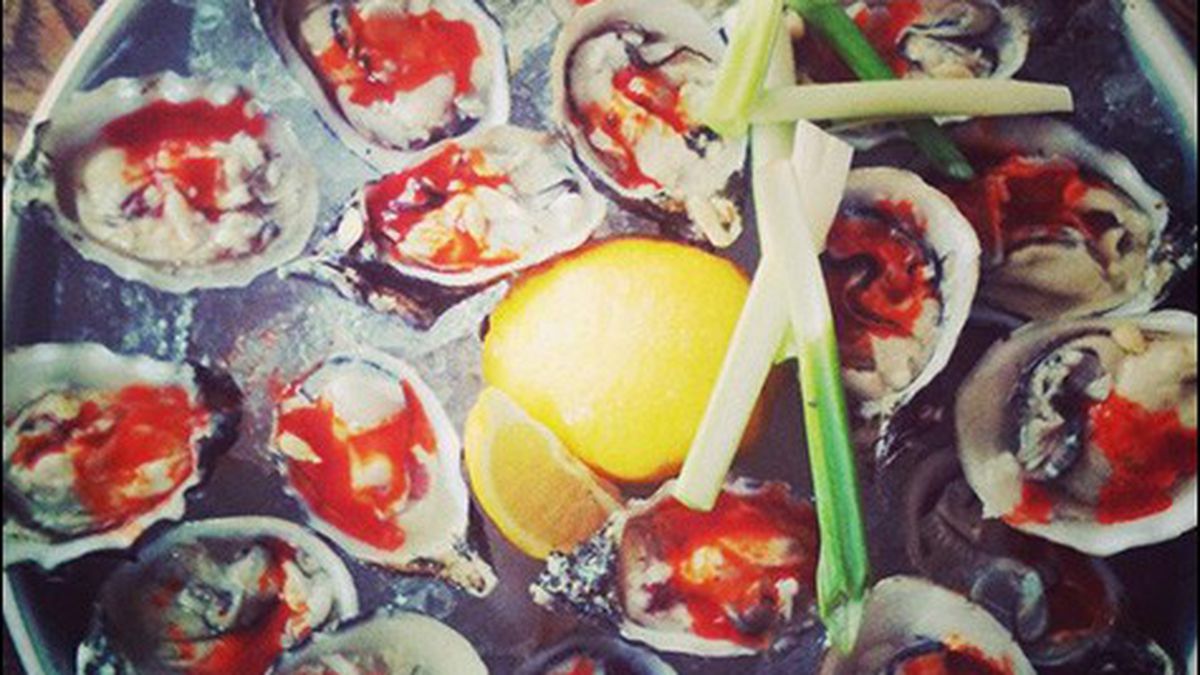 In Uptown Oakland, a new restaurant called Captain & Corset (2212 Broadway) is softly opening on Friday, May 23, in a prime location — part of the same building shared by Plum (now Ume; see below) and Ike’s Lair, in the space previously occupied by a string of short-lived wine bars, including The Punchdown and Franklin Square Wine Bar.

The most recent tenant, 2212 Wine Bar, was open for just four months. When owners Paul Fitzpatrick and Sam Patel (both execs in the Ike’s sandwich empire) decided to close the wine bar, they put together a team of prominent Bay Area restaurant folks to give the place a complete overhaul.

Captain & Corset will feature some familiar faces: Sophina Uong, the chef at Picán, is putting together the menu. The general manager is Carlos Nieto, an Oakland-based event planner, who most recently organized a ceviche-themed pop-up series. And Kiri Eschelle, who owned San Francisco’s Levende Lounge and Old Oakland’s Levende East, has the catch-all title of director of operations — the restaurant, which she describes as a “New American bistro,” is mostly her concept.

The name of the restaurant is meant as a kind of stylized juxtaposition between the masculine and the feminine, Eschelle explained. The space is small, with room for just 38 seats. Just for fun, a projector will play nothing but Christopher Walken movies with the sound turned off.

Meanwhile, Uong said she’s in the process of putting together a kitchen team that will include a few cooks from Picán and several former employees of Ike’s who had been running the 2212 Wine Bar kitchen. The menu is a work in progress, but might include things like fried soft-shell crabs, lamb tacos, and something Uong described as “tomato soup cake.” The restaurant will eventually apply for a full liquor license, but for now, Uong is creating a selection of wine-based cocktails to supplement the beer and wine list.

Last Friday brought news that Plum (2214 Broadway), Daniel Patterson’s restaurant in Uptown Oakland, has closed after three and a half somewhat tumultuous years. In its place, a new restaurant called Ume opened on Tuesday with a Japanese-inspired, significantly less expensive menu developed by Patterson and a new chef: Brett Cooper, formerly of San Francisco’s Outerlands.

But there will be plenty of time to talk about that. For now, let’s pay our respects to Plum, an esoteric, highly ambitious, occasionally brilliant restaurant that, after a series of often-sudden chef shuffles, never quite seemed to regain the packed dining rooms of its early days.

“I don’t think the concept of fine dining is right for the area,” Patterson told Inside Scoop. “The chef hasn’t made any difference. … I had an idea. I tried it and it didn’t work.”

Patterson’s original idea was revolutionary in its way: to serve the kind of precise, gorgeously plated, high-concept dishes that you’d find at restaurants like Commis or Coi, Patterson’s own San Francisco flagship — but to do it at lower prices, and in a more casual setting.

But in the end, perhaps the prices still weren’t low enough. And as high as the food soared at Plum (especially under chef Charlie Parker at the beginning and Kim Alter at the end), the dining room always felt slightly austere. Here’s to hoping that Ume can add a bit of warmth to the proceedings, to go along with the lower prices.

As for Alter, Patterson told Inside Scoop that the chef will take a well-deserved break, spend some time helping fellow Patterson acolyte Charlie Parker at Haven (Plum/Ume’s sister restaurant in Jack London Square), and eventually — with the Patterson restaurant group’s support and funding — open a restaurant of her own in San Francisco.

The Cook and Her Farmer Opens

After a months-long build-out, The Cook and Her Farmer (907 Washington St., Oakland), the newest arrival at Swan’s Marketplace in Old Oakland, softly opened this past Friday.

Co-owner Romney Steele, the “cook” in the restaurant’s name, has described the oyster bar as having roots in both the South and in Northern California’s local-and-seasonal-sourcing tradition. The menu will include raw and grilled oysters (shipped in fresh from Tomales Bay), as well as gumbo and po’boy sandwiches. It’ll be a casual place, where customers order at the counter and then seat themselves in Swan Marketplace’s communal dining area.

To start out, The Cook and Her Farmer will serve lunch, Monday through Saturday, from 11:30 a.m. to 3 p.m., with “pop-up”-style dinner service on Fridays and Saturdays. The lunch menu will include oysters, hand-cut French fries, two salads, one or two sandwiches, and house-made pickles. For dinner, a few larger shared plates will be added to the mix. And the restaurant will offer three beers on tap (including Linden Street Brewery’s Hop Candi), plus an assortment of California wines.

Facebook
Twitter
Linkedin
Previous articleReport: When It Comes to Mortgage Loan Servicing, Banks Are Still Failing to Comply With the Law
Next articleWednesday Must Reads: LAO Says Brown Is Overestimating Costs, Too; Feds Say Most of California’s Shale Oil Reserves Area Not Recoverable Via Fracking
18,656FansLike
0FollowersFollow
67,429FollowersFollow