An unprecedented human trial of vaporized cannabis is set to begin this summer at San Francisco General Hospital, Legalization Nation has learned.

Pending final clearances, SF General Hospital Chief of Hematology and Oncology Dr. Donald Abrams will use government dollars and government-supplied weed to see if cannabis reduces the pain and inflammation associated with sickle-cell disease. Such scientific studies are extremely rare, because of the ongoing federal war on marijuana.

Scientists need government permission and government-grown grass to conduct any research deemed acceptable. Problem is: the US government doesn’t grant that permission, and it almost never coughs up the weed.

Specifically, the National Institute on Drug Abuse generally rejects any study seeking to find benefits in the herbal remedy used by humans for thousands of years. NIDA is tasked by Congress with preventing cannabis use, not supporting it. CNN’s Dr. Sanjay Gupta said this spring that Americans have been “systematically” misled about cannabis at an “institutional” level.

Despite the federal blockade, Dr. Abrams has patiently persisted, and will conduct his first clinical trial of vaporized cannabis in humans in seven years, we report for a story in CULTURE magazine that published last Friday.

“The odyssey toward approval for the sickle cell study illustrates why human trials are so rare. Dr. Abrams needs approval from eight different medical bodies, [some of whom are] tasked with researching the harms of cannabis, not the benefits. Those benefits may include reduced pain, inflammation and disease progression in people with sickle cell disease.

Years ago, Abrams had heard that Jamaicans’ high cannabis intake might have something to do with malaria. The mosquito-born blood parasite that causes the disease has a tougher time killing people who have a mutation that changes their red blood cells from their usual round, soft shape into an elongated, tough, sickle shape. The downside to the malaria survival adaptation is pain, inflammation and a shortened lifespan—all caused by the sickle-shaped blood cells clogging up veins. 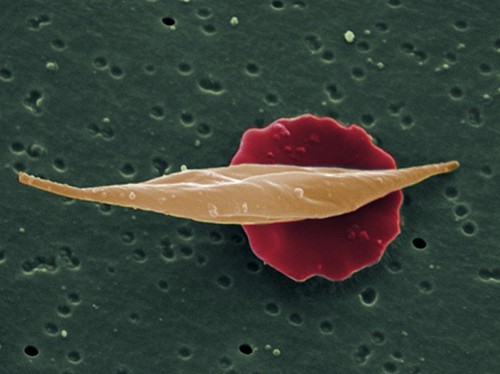 Indeed, in 2012 a researcher came to Dr. Abrams with a mouse model for not only treating sickle cell pain and inflammation but preventing it with cannabis. Dr. Kalpna Guptna wanted Dr. Abrams to write a clinical trial so she could get a grant from the National Institute of Health.

“[A trial offered] the ability to do truly translational research,” Dr. Abrams said. “We can see if it really correlates. That’s pretty exciting.”

Numerous obstacles lay in his path, however. First, a government shutdown sequestered the funds. Then the Food And Drug Administration said it considers a common molecule in pot —cannabidiol — a “novel molecular entity.” That means the FDA considers CBD “untested in humans,” even though countless thousands of people use it every day for arthritis, epilepsy, pain, and other conditions. A few pedestrians, in fact, are probably smoking CBD at the bus stop on Potrero Avenue in front of SF General this morning.

Dr. Abrams persisted, eventually winning FDA approval, getting pot from NIDA, and jumping through yet more hoops at the Drug Enforcement Administration and the Research Advisory Panel of California.

Pending final approvals, Dr. Abrams is looking to recruit 35 sickle cell disease patients this summer to come down to SF General and get paid to smoke low-grade government pot (3.5%THC-3.5%CBD) grown in Mississippi, or a placebo, for five days.

Still, Dr. Abrams remains skeptical about the prospects for more clinical trials involving whole plant cannabis and its extracts for cancer, epilepsy, and other conditions for which patients report relief. “There aren’t that many people out there getting cannabis in clinical trials,” he said.

Dr. Abrams — who literally wrote the 2014 textbook on Integrative Oncology — favors de-scheduling cannabis and treating it like other herbal supplements. He was instrumental in getting the California Medical Association to endorse outright legalization in 2011.

“I try to stay out of politics,” Dr. Abrams told me for CULTURE. But he also said, “let’s see how Colorado and Washington do.”