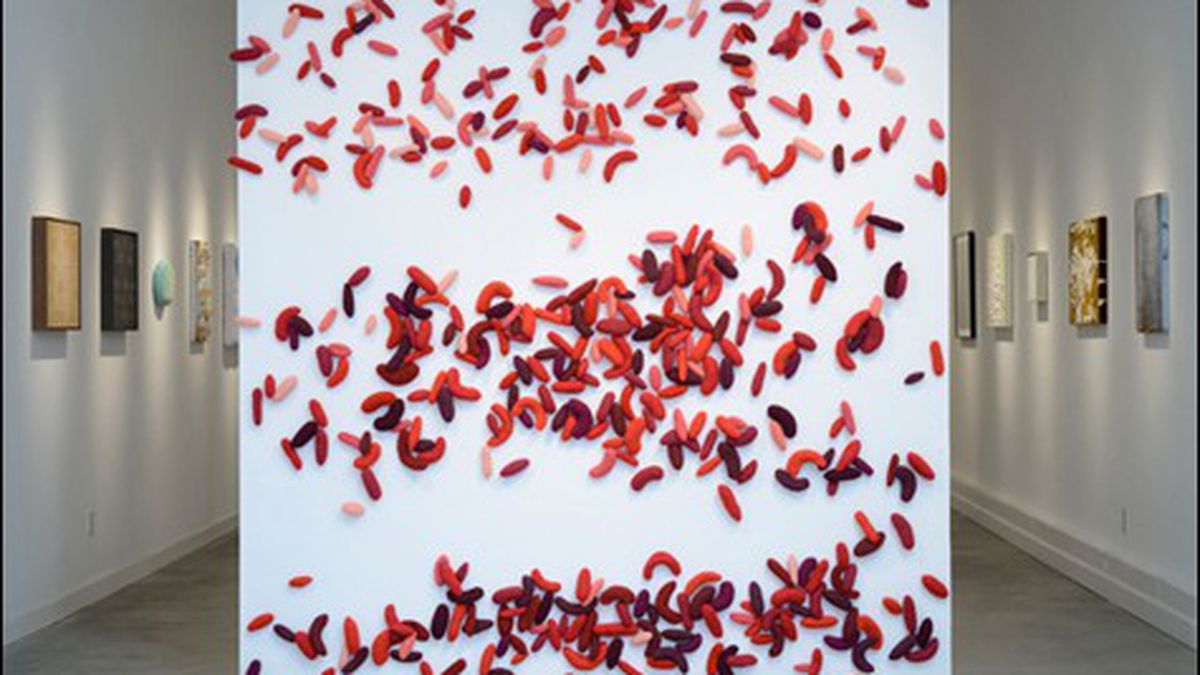 Years after her time spent as a medical lab technician, Berkeley-based artist Ruth Tabancay is still seeing the world through a microscope. All those hours spent examining nature’s abstract forms have left her with a psychological imprint of squiggles and globules that she can’t seem to shake. To her, fallen seedpods resemble viruses; tea bags are magnified organisms made tactile. With her new solo show at Oakland’s Mercury 20 Gallery, Microcosmos, Tabancay expresses those personal associations by inviting viewers to get under the magnifying lens and into her memory space to experience those forms in textured tangibility through sculpture, weaving, and installation.

The most eye-catching piece in the exhibit is “Serratia Over San Francisco,” an assemblage of hand-felted pellets affixed across a wall with no apparent organization. The viewer is first grabbed by the pellets’ vibrant spectrum of pinks and reds, and then drawn into their disarray, lost in an attempt to trace a pattern among them. The piece resembles a massive spilled box of hot cinnamon Tic Tacs. But the actual inspiration for the piece is more historically, scientifically, and personally grounded than that. It is Serratia marcescens, a bacterium that was controversially released over San Francisco by the US military in 1950 to test the population’s vulnerability to germ warfare. Serratia marcescens was also one of the bacteria that Tabancay worked with frequently while in the lab. It stuck with her because of its unusual redness and interesting backstory. “I didn’t initially start out to make a statement about the military or human experimentation without permission, but that was kind of the story that came with it,” Tabancay told me at the show’s opening on July 5.

Rather than providing commentary on medical ethics, Microcosmos works more as a vehicle by which viewers can enter a world where scale is radically skewed. Many of the pieces are collections of small, textured shapes that accumulate into large-scale patterns. With these, Tabancay continually traverses the gap between micro and macro.

The textiles included in the show create the same effect. Tabancay constructed them by taking photos of fabrics with a scanning electron microscope and then weaving those images into cloth with a computerized Jacquard loom. The products are essentially mind-bending weavings of single stitches.

Although the show is rather small, the pieces themselves are large and the statement they collectively make is decidedly scale-less. Ultimately, though, both science and scale are only symptomatic concepts of the more fascinating focus of the show — the personal associations made in the mind of someone who let the left and right halves of her brain intermingle. “I’m kind of mining my past with microscopy and medical education, everything I ever knew,” said Tabancay. “And everyone has that, they just don’t know it.”

What Color Is Fire?