.Two East Bay Barbecue Joints Where Side Dishes Are the Main Attraction 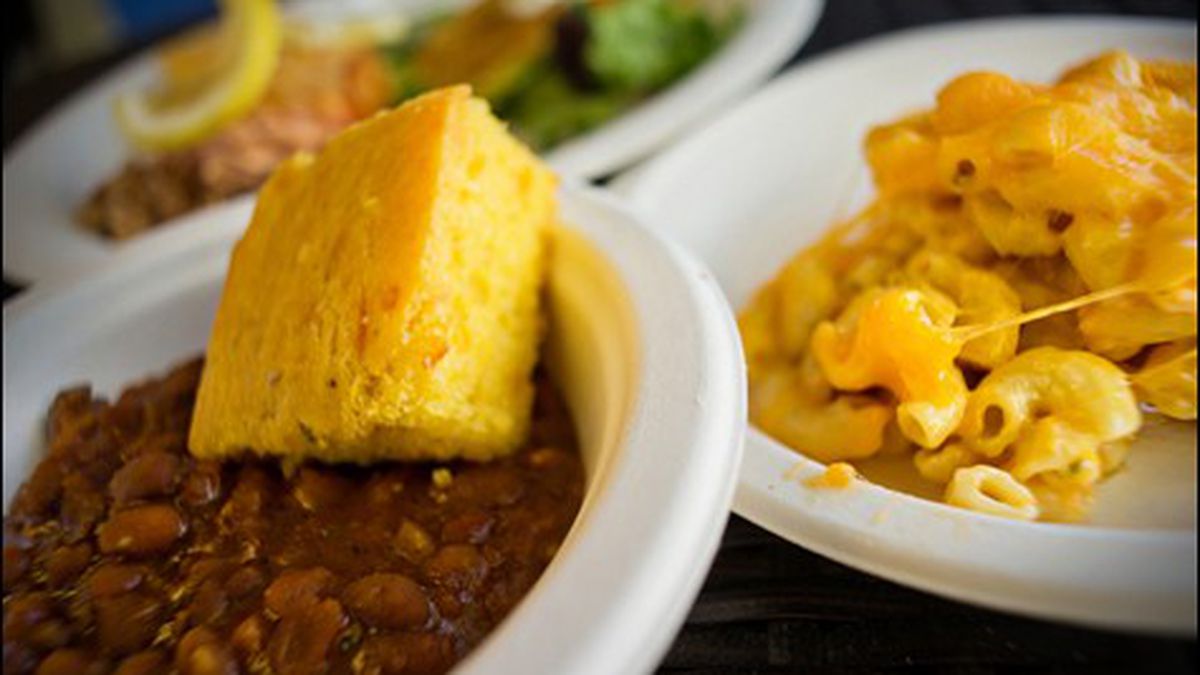 Sometimes it seems like barbecue joints take perverse pride in the mediocrity of their side dishes. “It’s all about the meat,” the apologists will say, as though mushy collard greens and sad slices of supermarket-grade white bread were some badge of honor.

I can respect single-minded devotion to one’s craft. Still, is it unreasonable to expect the kind of restaurant that lovingly smokes each side of brisket, low and slow, for twenty hours to invest a little bit of that TLC in its cornbread and mac ‘n’ cheese?

Fortunately, a couple of new-ish East Bay barbecue restaurants buck the trend. Genny’s BBQ and Smoke Berkeley both serve better-than-decent ‘cue, but it’s the side dishes that will keep me coming back.

It’s been about five months since first-time restaurateur Virginia Roberson took over the East Oakland barbecue joint The Smoky Fire Pit, renaming it Genny’s BBQ. Inspired by the culinary program she’d recently completed, Roberson wanted the restaurant to be the kind of mom-and-pop place where everything’s homemade: “There’s nothing out of a can, box, or bag in here,” she said.

That kind of talk isn’t uncommon, but Roberson’s array of side dishes — two of which come with each dinner plate — have a homey, tended-to quality that set them apart from what’s served at your typical hole-in-the-wall soul-food joint. The collard greens had a nice bit of heat, and were tender without being soggy. The candied yams were decadently buttery, with a hit of fresh ginger for added intrigue. And the Louisiana-style red beans and rice were some of the best I’ve had — soupy and savory and just spicy enough, with chunks of tender pork shoulder cooked in with the beans. And no meal at Genny’s is complete without a big slab of cornbread, which is moist, cake-like, and quite sweet — dessert and a side dish all in one, though it’s also tough to pass on Roberson’s excellent homemade sweet potato pie.

The barbecue isn’t bad, either. Roberson admits to being a relative novice (she never worked a smoker prior to opening Genny’s), but all of the meats were infused with a satisfying smokiness. I could nitpick: The beef brisket wasn’t quite fatty enough, and it was served chopped up and drenched in sauce, a style that’s less appealing to me than the thick slices you find at the most serious barbecue joints. The ribs had fantastic flavor, but needed more time — low and slow, as they say — to become tender. And Roberson said she’s still tweaking her tomato-based barbecue sauce — a tasty, smoky version, if a bit sweeter than I prefer. (If in doubt, ask for it on the side.)

The sliced beef tri-tip, on the other hand, was better than any ballpark version. And the best main dish wasn’t barbecue at all, but rather a plate of oxtails drenched in a delicious, deeply savory gravy and served over a bed of rice.

Genny’s is mostly a takeout joint, but the restaurant is more spacious than it appears from outside. The food is served in takeout boxes even when you dine in, but don’t let that stop you from grabbing a seat at one of the booth-style tables — say, on a Sunday afternoon, when the after-church crowd is in the house: It’s a perfectly comfortable place to dig into a mid-day barbecue feast.

Meanwhile, Smoke Berkeley has mostly flown under the radar for the year and a half it’s been open, in part because for the first six months the restaurant was only open three hours a day. Even now, Smoke, like Genny’s, is mostly just a takeout counter, situated in a tiny building on the edge of a car wash parking lot. Dining in is an ad hoc affair, with a couple of small indoor tables and a few more arranged haphazardly outside, facing the car wash. Still, you’d be hard-pressed to find a friendlier, more welcoming hostess than chef-owner Tina Ferguson-Riffe, who’s usually the one who takes your order. The sunniness of the service, and the fact that all of Ferguson-Riffe’s employees are ex-convicts or other formerly-down-on-their-luck folks — hired through the nonprofit Bread Project and Rubicon Programs — make the restaurant a business worth supporting.

The food is worth supporting, too. Ferguson-Riffe is a native Texan, where good brisket is a kind of birthright. While her version doesn’t quite have the well-seasoned crust or luxurious fattiness of B-Side’s version, nor the outrageous cling-to-your-clothes smokiness of Double D’s, it’s well worth ordering — especially served with Smoke’s house-made spicy barbecue sauce, which, with its smoky, complex heat, is in the conversation for best in the East Bay. And Ferguson-Riffe’s signature dish, an Asian-inspired tea-smoked salmon — served with a zippy, brilliant-green cilantro-ginger sauce based on a recipe by Barbara Tropp, the legendary Chinese cooking expert — is delicious and might be the healthiest main dish you’ll find at a barbecue joint.

Even the one dud, an order of thinly sliced smoked lamb, tasted good — but the meat was as dry as jerky.

But, as was the case at Genny’s, the items I liked best were the side dishes. At Smoke, there’s a mix of traditional sides and others with playful, globally inspired twists: Mexican cornbread (a Texan classic, very dense, with bits of fresh corn and jalapeño) and zucchini pancakes that wouldn’t be out of place at a Jewish deli. The mac ‘n’ cheese was spiked with jalapeño, too — with its crunchy, well-browned crust and the pasta cooked just right, the dish stood in contrast to the goopy versions served at most soul food restaurants.

Best of all, and the dish I’m still dreaming about, was the Texas-style baked beans, whose flavor profile bore a passing resemblance to the stuff that comes out of a can — but a million times better. These little pinto beans, slow-cooked in a sweet, garlicky sauce loaded with nubs of soft beef fat (an ingenious use of brisket trimmings), are worth a trip on their own.