The University of California is implementing measures to accommodate transgender and gender nonconforming students — but for many, there's still a wait for the bathroom. 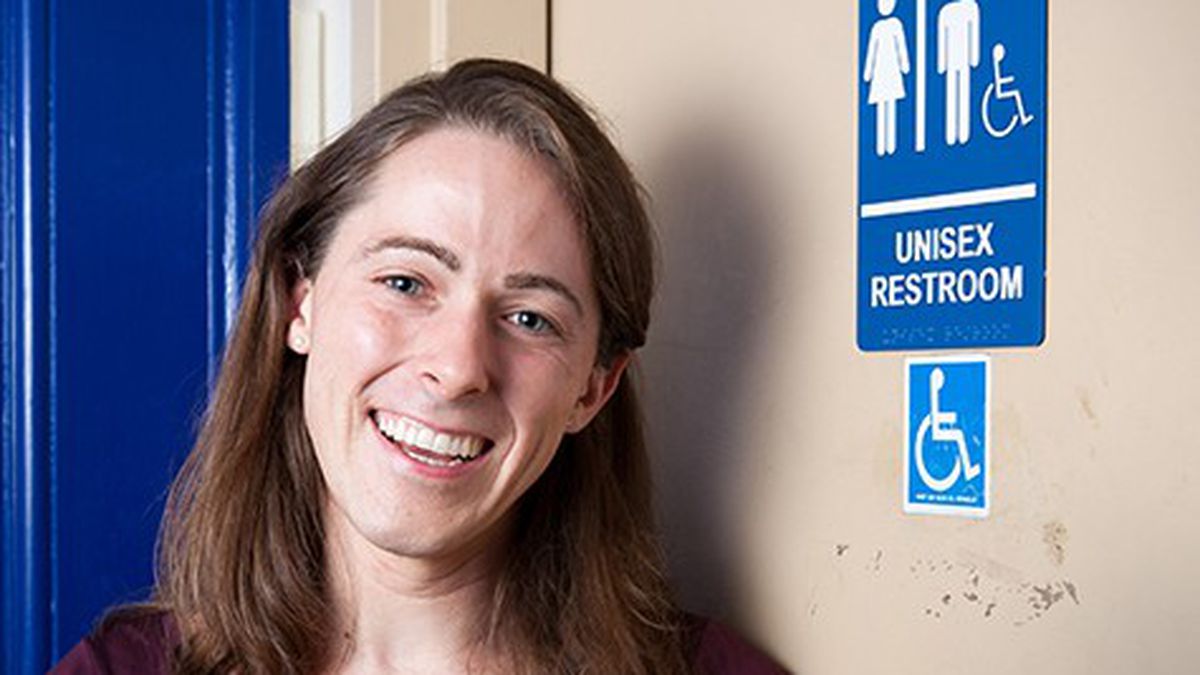 Last spring at UC Berkeley, small plastic cups filled with fake urine lined the walkway under Sather Gate, one of the main campus entrances. Taped to the ground next to the cups were signs that read, “Where was I supposed to go?,” “I couldn’t hold it any longer,” and “[UC President Janet] Napolitano wants us to be the Gold Standard, but we still don’t have a pot to piss in.”

Transgender students and allies were demonstrating their growing frustration with the lack of gender-neutral bathroom facilities available to trans students, echoing protests happening on campuses across the country. This action was one of many that occurred during the 2014-15 academic year, prompting University of California officials to repeatedly release statements saying that they were “working hard” on cultivating an inclusive campus environment.

By some measures, it appears they have been.

This fall, the university will implement a series of new measures and policy changes designed to better accommodate trans and gender-nonconforming students across its ten campuses. On application forms, prospective students will now have six different options for disclosing their gender identity: male, female, trans male, trans female, gender queer/gender nonconforming, or different identity. Previously, only male and female options were available. The UC Office of the President also recently announced a two-year project to promote the study of gender and sexuality. That initiative, which tasks UC professors and students with identifying methods for advancing education on LGBT issues, will culminate in a symposium that showcases their research.

Additionally, all new buildings and existing facilities undergoing “major” renovations will now be required — and budgeted — to include plans for gender-neutral bathrooms. The goal is to have one gender-neutral bathroom on all floors that have restrooms, according to Kate Moser, spokesperson for the Office of the President.

In a June statement announcing the new measures, Napolitano said there was more work to be done: “We must continue to look at where we can improve so everyone at UC feels respected and supported.”

In recent years, there have been a number of efforts across the university to better serve students and staff who do not conform to gender binaries. In 2014, at the recommendation of an LGBT advisory group that reports to the president, the university began allowing students to list both preferred names and legal names on student records, and also began the slow process of converting single-stall restrooms into gender-neutral facilities wherever possible. These changes — along with existing healthcare benefits for trans students, extensive course offerings in gender studies, co-ed residence halls, and a wide range of LGBT student groups — have earned the university a reputation for being one of the more inclusive education systems for trans and nonconforming students.

But despite this progress, some UC Berkeley students have argued that major changes are still needed and that the administration has been slow to respond to activists’ requests.

“The university has definitely shown a lot of interest in issues affecting transgender students, but unfortunately this [has resulted in] a lot of discussion and very little direct action,” said Koty Dailey, a junior at UC Berkeley. Dailey identifies as agender, meaning neither male nor female. “There have been ordinances that all new buildings must have ‘all-gender’ bathrooms, but that’s not enough.” Dailey added that some trans students still won’t have convenient restroom options under the new measures, since there are many older buildings that aren’t undergoing “major” renovations.

With the current facilities, finding an appropriate and safe bathroom on the main campus can be a challenge for trans students, according to student advocates. The Gender Equity Resource Center at UC Berkeley, which provides resources for LGBT students, published a map with 33 bathroom facilities that are accessible to trans and nonconforming students. But students said some of those locations are inconvenient to use during the short break between classes. Dailey said the lack of gender-neutral facilities “forces students to memorize the locations of the currently available all-gender restrooms and walk greater distances.”

There is no campus rule or law barring trans students from using restrooms that correspond to their gender identity. But finding a bathroom can still be a stressful process, especially for those who have previously faced discrimination or harassment in a public bathroom. David Green, a transgender woman and graduate student at the Goldman School of Public Policy at UC Berkeley, said that traditional bathrooms that have multiple stalls, but lack trans-friendly signs can cause a lot of anxiety.

“If UC Berkeley really wants to be ahead of the game, signs are a good place to start,” said Green, adding that she supports the school’s decision to change existing single-stall restrooms into gender-neutral facilities. She said she would also like to see more multi-stall restrooms gain inclusive signage, such as “women+” or “men+” or “all-gendered.” These minor revisions to signs, she said, could help “reduce the feelings of outsiderism” for trans people and change the perception that the facilities are only for cisgender people, meaning people who identify with the gender assigned to them at birth. She and Dailey said they would both also support efforts to institute a diversity and inclusivity workshop, similar to the short courses on sexual harassment and alcohol use that are required for freshmen and transfer students. “Educational programs like this could definitely reduce the stigma,” Green said.

Conservative groups have opposed efforts to convert multi-stall bathrooms into gender-neutral ones by insisting that they put women at risk — an argument that can be especially hurtful to transgender women. “Bathrooms are one of the most gendered spaces there is. And one of the reasons it’s gendered is supposedly for safety — part of it is to protect women from creepy men,” Green said. “So the threat in that moment of being perceived as that creepy man or a peeping tom is both challenging to your identity and challenging to your right to be in that space.”

Green recalled that when she first arrived on campus, she would often dehydrate herself and go the entire day without using the bathroom for fear of being wrongly perceived. She said more trans students could avoid that experience if inclusive signage and gender-neutral restrooms were easily accessible and accepted on campus.

But Christine Shaff, spokesperson for UC Berkeley’s campus real estate division, said that changing signs is “unfortunately far more complicated than it initially seems.” Shaff said the school works to accommodate trans students, but is sometimes limited by building regulations written into state codes, which have requirements to provide separate restrooms for men and women. She cited as an example one code that requires buildings to have restrooms for each sex on every other floor, meaning that if the university converted existing facilities to gender-neutral ones, it could potentially violate building regulations in some locations.

“It isn’t always as simple as changing a sign,” said Shaff, adding that the university is also sometimes restricted by the costs of converting facilities. “But in situations where it is that simple, we’ve done it.”

In March, when a group of student activists called the UCOP Bathroom Brigade attempted to install trans-friendly bathroom signs, UC Berkeley staff quickly removed the unauthorized signage. In a critical op-ed in the Daily Californian, transgender student Clare Stinchcombe wrote that “it’s becoming increasingly clear that the administration’s actions are not consistent with their declarations of support.”

Additionally, converting restrooms to gender-neutral facilities could lead to backlash from groups that argue that the change constitutes an invasion of privacy. Religious advocacy groups, such as a statewide coalition called Privacy for All, have repeatedly tried to halt measures in California that allow transgender people to use bathrooms that match their gender identity. There doesn’t, however, appear to be any organized opposition to expanding gender-neutral bathrooms at UC Berkeley.

Green, who is entering her final year at UC Berkeley, said she is hopeful that with ongoing advocacy efforts, the campus will continue to become more welcoming to trans students. “We’ve come a long way in discussing and addressing trans issues, and I think we will get there one day,” she said. “But if we just assume everything’s okay and assume it’ll all work out, then we’ve given up before even really beginning to try.”