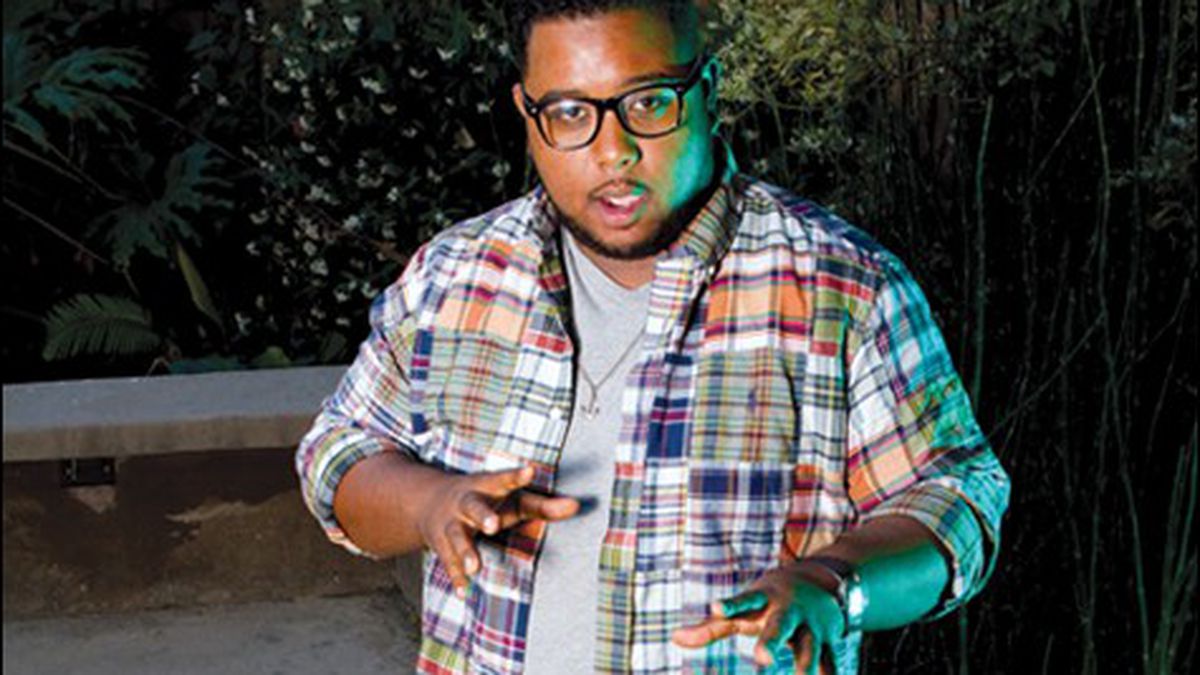 A local producer reinvents himself. Sort of.

Like any good remix king, Trackademicks — aka Jason Valerio — is canny around the media. His work relies largely on a certain form of artistic protectionism, in that he gathers samples from increasingly weird or hard-to-find sources, and tries as hard as he can not to reveal their origin. Take, for example, the vocal loop he used for a well-known remix of E-40‘s song “Tell Me When to Go,” which garnered commercial radio play in 2006. “It’s from the same group that J Dilla sampled for Slum Village, in a song called ‘Playaz,'” Trackademicks said. That’s as much information as he’s willing to give. Deep Googlers will figure it out.

Trackademicks launched his career in an era when secrecy really mattered, and the code of thieves was a lot stronger among crate diggers and filchers of samples. If you wanted to figure out which pilfered material another artist was using, you had to carefully read the liner notes, or listen over and over again until you eventually cracked the code. Jay-Z’s “Politics As Usual?” Easy. The producer, Ski, cribbed part of his beat from The Stylistics. Trackademics could tell you that without using Wikipedia.

The real-life Jason Valerio is a well-adjusted, regular dude, who came up in a crew of other well-adjusted, regular dudes (and one female) — which might seem odd, for Bay Area hip-hop. Raised in Alameda, he played alto and bari sax in high school, worked at local nonprofit Youth Radio, and spent his allowance money on records. He started making beats in the late-Nineties, using an ASR-88 keyboard and sampler. His brothers play guitar, so he seldom gets pigeonholed as the “crazy artist” in the family. He even pursued a business degree at University of San Francisco while serving as manager for the campus radio station, KDNZ. If the lyrics on Trackademicks’ song “Get a Job” are to be trusted, then he once worked in Silicon Valley. He said the song is actually a metaphor.

So it took a while to develop the characteristics of a hard-core producer: technophilia, a purposeful work ethic, an obsession with gear, and slightly reclusive tendencies. “Well,” the producer said, reflecting on his character traits during a listening party at Berkeley’s Beta Lounge, “I am a Capricorn.”

But now, Trackademicks has reinvented himself again. Well, sort of. He recently began working with Brooklyn indie label Fool’s Gold, which puts out hipster artists like Chromeo and The Cool Kids. A couple weeks ago he released his first solo album of original compositions, called State of the Arts. It follows on the heels of three well-received [Re]Mixtape albums, the last of which dropped in 2010. But this one is entirely self-crafted. Trackademicks already released the album digitally, and he plans to release a physical copy with a large book of annotated liner notes, just like in the old days. The whole idea is to transform his image from that of someone who remixes other people’s tracks to that of a songwriter. To top it all off, he raps on every single song.

Trackademicks is no stranger to reinvention. He did it in high school, when he wanted to go from being a band geek to a radio DJ. And he did it again in the fall of 2006, after a fire incinerated most of the gear in his 4th Street studio, causing an estimated $10,000 to $15,000 in damages. But now the thirty-year-old artist is at an even more pivotal point in his career. He’s got the chops, but can he sell the albums?

Well, he’s certainly got a good sales pitch. “I call all my music breezy,” he said, hanging out in his studio last Thursday with de facto manager Tapan Munshi — aka DJ Tap — who is also a member of Trackademicks’ East Bay hip-hop crew, The Honor Roll. The room seemed small and dark, with its dusty record shelves and conspicuous lack of windows. A chamber music version of “Purple Rain” played on the computer speakers. Munshi typed feverishly on a laptop, his keystrokes overpowering the slick, metallic chime of Trackademicks’ cell phone. Apparently, it’s an ideal place to court the muse. Trackademicks says he comes here almost every day, and sometimes stays well into the night. “It’s just hours and hours and hours of nerding out,” he said. He paused a beat, then added, “Girls just don’t understand.”

The two of them explain that “breezy” is more a “texture” than a technical term. Trackademicks prefers music that feels light and buoyant, even if it’s heavily orchestrated. He grew up listening to a lot of Sadé and Anita Baker before they were considered cool. He likes dense harmonies, broken beat, and the 808 sound that predominated in Nineties-era West Coast music. Ever the sloganeer, he’s found a slew of creative ways to describe his sound — “breezy” being the most tame. My personal favorite is “Western Slapademic Tender Smobbin Cosmic Music,” an Outkast-derived phrase that Trackademicks used as a song title on [Re}mixtape Vol. 2. That description seems accurate — if you think of it as long-hand for indie hip-hop.

And, fittingly, most of Trackademicks’ raps take place in the trenches of quotidian life, covering such topics as artistic frustration, self-employment, and money management. On the intro to “Get a Job,” the emcee gets defensive about his background. “People used to ask me, ‘Tracks, why you do so well in school? Why you on the honor roll?’ I was like, ‘Man, you know why I’m on the honor roll. I gotta get that good job.'” On “D.I.Y.” he complains about maxed-out credit cards and a cash flow that’s “slower than a constipated asshole” — which might be the album’s best example of observational humor. “Fool on the Hill” — no relation to the Beatles song — uses the SAT word “apogee.”

On such songs, Trackademicks comes off as more of an iconoclast than he actually is. The guy you meet in person is patient and soft-spoken, explaining everything in careful, measured tones. He secretly owns a lot of Brit-pop and twee, but don’t tell anyone. He also has a retro fashion sense: Air Jordans, denim jacket, limited-edition T-shirt with the slogan “They Smile in Your Face” printed on the front, and a back-stabber logo on the back. He even sports an Amtrak button that says, “Tracks are back!”

If all goes according to plan, he’ll make good on that slogan, too.

Facebook
Twitter
Previous articleChappelle’s Show Sells Out Instantaneously at The New Parish
Next articleWednesday Must Read: Oakland May Get Weed Farms After All; Claremont Hotel Files for Bankruptcy
18,632FansLike
0FollowersFollow
67,429FollowersFollow

‘Hemperor’ Jack Herer Passes Away at 70