The thin-crust pizza at this recent addition to Emeryville's Public Market is a pleasant surprise. 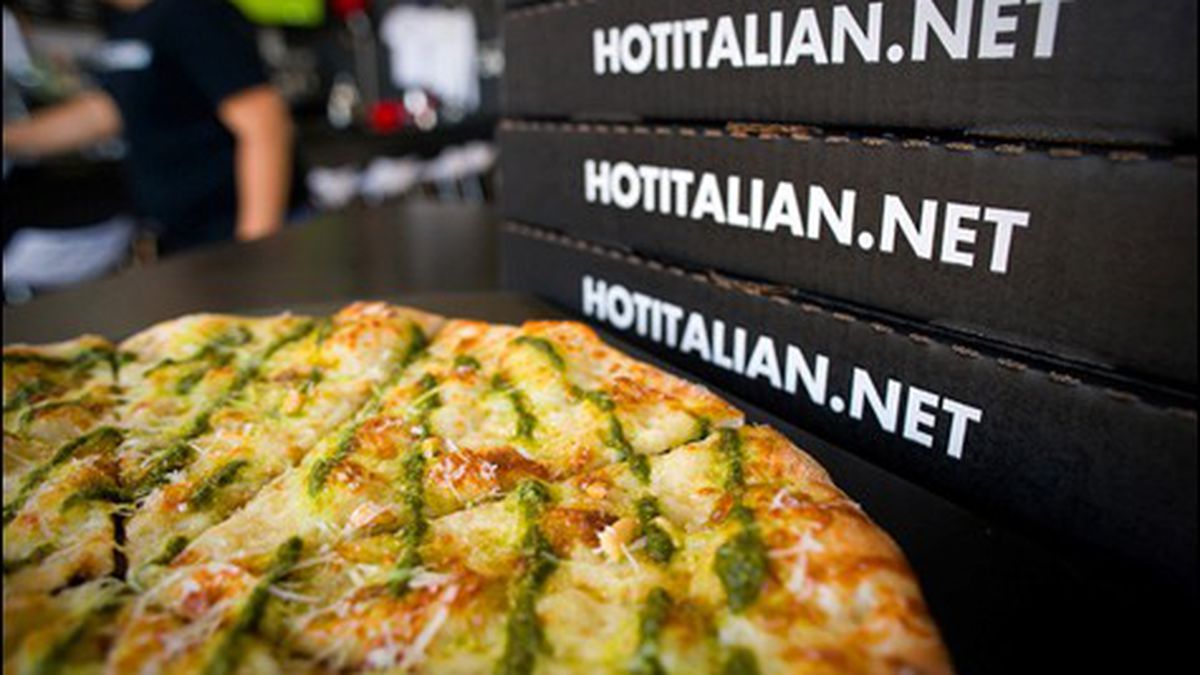 Having spent my formative years in suburban New Jersey, where local gems are outnumbered by Olive Gardens, I’ve developed what you might call an overzealous skepticism toward shiny strip-mall restaurants. Which is why I was initially wary of Emeryville’s Hot Italian.

It isn’t a chain — it’s the second location of the Sacramento-based pizza bar — but it does have a bit of that slick commercial feel, from the servers’ black “Hot Italian” T-shirts to the little graphic icons on the highly customizable mix-and-match menu. (Want to have that salad on top of a pizza? No problem. Want to turn the pizza into a sandwich? Done.) And the Emeryville branch is essentially a strip-mall restaurant, located in a big warehouse-y space at the Public Market — past the preteens duking it out at the ping-pong table outside Urban Outfitters, past the entrance to the humongous food court. But despite its surroundings, Hot Italian has the feel of a stylish modern cafeteria: seat-yourself communal tables, soccer matches projected onto the wall, and an all-window facade that floods the dining area with natural light.

As for its thin-crust pizza, it’s quite good — the handiwork of co-owner and head pizzaiolo Fabrizio Cercatore, an Italian transplant who moved to the United States to open the original Hot Italian in 2009. His business partner, Andrea Lapore, told me Cercatore doesn’t adhere to any particular regional Italian style — he isn’t orthodox about using a prescribed type of flour or tomatoes from a specific region in Italy. Instead, the pizzas are a bit of a hybrid (prosciutto from Italy, cheese and tomatoes from California), though the flavor combinations tend to be traditionally Italian.

The pies rotate seasonally, and each one is named after some “hot” Italian celebrity — rock stars and soccer players, mostly. The Cannavaro was topped with tomato sauce, mozzarella, and basil — a classic Margherita — and seemed a fine choice to test the pizzaiolos’ chops. It passed muster: The pizza had neither too much nor too little sauce or cheese and a slightly chewy crust with a depth of flavor born from the dough’s long rise.

Strangely enough for a restaurant called “Hot Italian,” the pizza should have come to our table a bit hotter — we weren’t sure if that was a fault of the electric oven (the Sacramento shop uses one that’s wood-fired) or a service snafu. And neither the top nor the bottom of the pie were as deeply charred as I would have liked — if crispiness is the main quality you prize in a pizza, you might be disappointed.

You can get significantly better pizza at Pizzaiolo or, if the New York style is more your speed, Rotten City Pizza. Still, it’s a damn fine pie for $10, and you’d be hard-pressed to find a (relatively) quick dining option before catching a flick at one of the nearby cineplexes or after a soul-crushing IKEA run.

Problems can occur when you veer away from the simpler pies. With too many toppings, the crust gets soggy and the flavors become muddled, as was the case with the Fiori (with prosciutto di parma, arugula, mushrooms, and truffle oil) — though apparently it’s a bestseller and was a hit with my tablemates. On the other hand, while simple, the sauceless Bellucci (with house-made fennel sausage and fresh ricotta) suffered from blandness.

My favorite pizza was the Ligabue, a pesto pie with roasted pine nuts and shaved Pecorino Romano: clean, classic flavors and — unencumbered by excess moisture — the best crust of them all.

And the Arcuri, topped with roasted summer vegetables and goat cheese, was like a hearty ratatouille in pizza form — a case where California and Italy melded together especially well.

The non-pizza items are hit or miss. The “Izzo” salad was a play-it-safe combination of baby spinach, sliced nectarines, marcona almonds, and creamy blue cheese — perfectly acceptable, but hardly a showstopper. And while the salumi and cheese platter is an excellent value, the spread isn’t so different from what you’d be able to put together yourself at the Whole Foods deli counter.

One of the restaurant’s quirks is that it uses the same pizza dough for almost everything: the pizzas, the flatbreads, the calzones. For the paninis, toppings are sandwiched inside two pieces of pizza crust. For dessert, Hot Italian takes a page out of Pizza Hut’s playbook with the Zucchero, a kind of Euro version of a dessert pizza: a piece of dough is covered with an Italian chocolate hazelnut spread, rolled up, and baked.

It’s a case study in how to maximize the use of a single ingredient. But this can go terribly wrong: Our Zucchero had an unappealing savoriness and a raw-dough taste, from the inside being undercooked, that left me feeling queasy.

A note about the service: During one visit we got our pizzas lightning-quick, but another time we got stuck behind a big office order, and service ground to a halt. At one point, we looked around and realized that no one in the entire restaurant was eating pizza. But credit where credit is due: Our apologetic server comped our dessert and one of our pizzas.

Ultimately, Hot Italian straddles the line between the gloss (and the studied inoffensiveness) of a chain restaurant and something better. And while Lapore herself never mentioned dreams of a pizza empire, she did say that she and Cercatore had been looking to expand into other urban areas. Their business model seems easy enough to replicate, so one can imagine these pizza bars spreading like wildfire, and maybe that’s not a bad thing: There are lots of places where Hot Italian would be probably be the best pizza in town.

Previous ArticleLee ‘Scratch’ Perry, The Orb Launch ‘The Orbserver in the Star House’

Next ArticleMid-Week Menu: Divino and Somerset Reboot, Oliveto and Wente Do Tomatoes