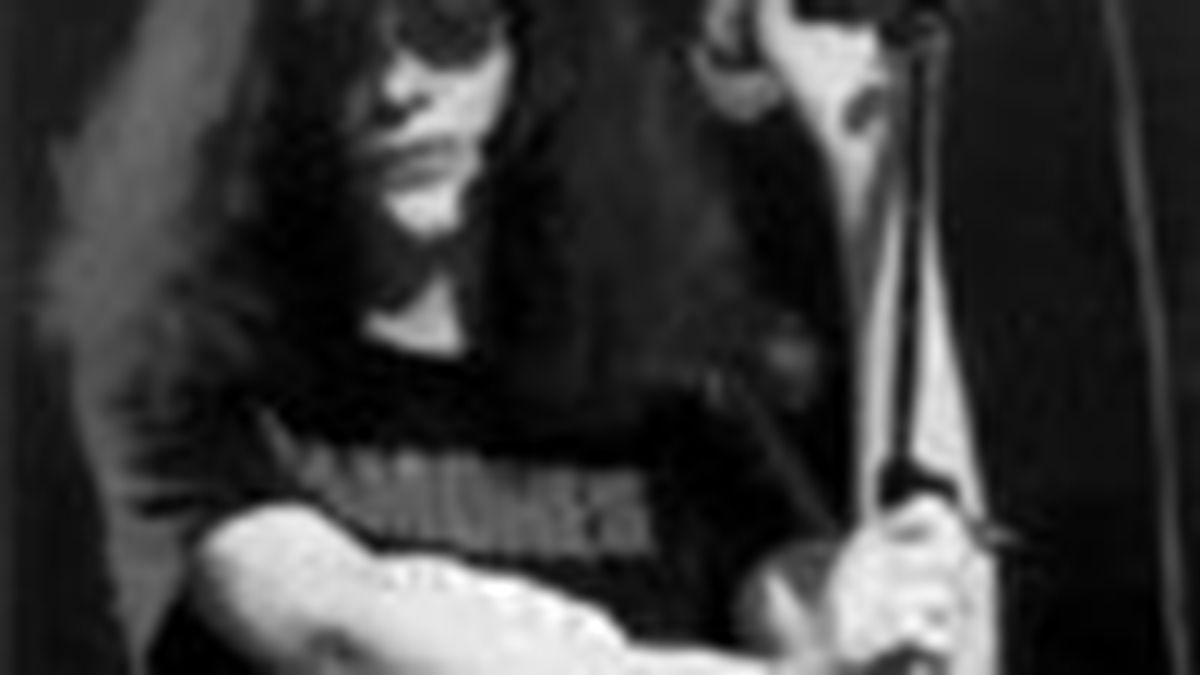 Too Tough to Die

The release of his solo album provides a revealing glimpse at Jeffrey Hyman's -- aka Joey Ramone's -- optimistic final days.

Like all great writers, Jeffrey Hyman used special stationery. “He was always writing lyrics on little scraps of paper — on shopping bags, on cardboard from shirts,” recalls his mom, Charlotte Lesher. “They would be really crazy lyrics.” Beat on the brat, he wrote, beat on the brat, beat on the brat with a baseball bat.

Hyman was particularly offbeat. “It was something to do with his, you know, emotional makeup,” says Leigh. “But I guess mostly it’s physical appearance. I mean he grew up.” But while other outcast adolescents holed up in their rooms, started fights, smoked their brains out, or got nose jobs, the shy, lanky Jeff Hyman dived headlong into pop culture and rock ‘n’ roll. He took in the girl groups, the Beatles, the Who, and the Kinks like scripture, slipping off to variety-show revues hosted by New York radio king and self-proclaimed “fifth Beatle” Murray the K.

When Lesher moved her family to an apartment in 1974, Hyman was forced to drop his first love, the drums, in order to avoid civil disturbances. So he migrated to vocals in the band he’d formed with three friends, and in 1974, decked out in biker jackets and sneakers and adopting a pseudonym Paul McCartney once used to check into hotels, Jeff Hyman, Douglas Colvin, Tom Erdelyi, and John Cummings became Joey, Dee Dee, Tommy, and Johnny Ramone.

And as Ed Sullivan might say, the rest is one “really big shoe.” The Ramones transformed the Lower East Side’s CBGB into the nucleus of a revolution and spread the revolution across the Atlantic. Today your love, tomorrow the world. They were branded Nazis by critics who’d never heard of irony. Joey developed some bad chemical habits. Now I wanna sniff some glue. They starred in their own film. They were trapped in the studio and threatened by a pistol-waving Phil Spector. Do you remember Hullabaloo, Upbeat, Shindig, and Ed Sullivan too? Joey wrote the greatest protest song of the ’80s. Bonzo goes to Bitburg, then sits down with a cup of tea. He kicked cocaine and booze through sheer will. This business is killing me. The Ramones toured the earth. Just get me to the airport and put me on a plane. Hurry hurry hurry before I go insane. And punk went mainstream and the Ramones finally became the Beatles, the Stones, and the Who — in stature, if not in units sold.

After multiple farewell tours and an album called Adios Amigos — which they promptly followed with another album/video, We’re Outta Here — the Ramones actually did call it quits in 1997, leaving Joey without a tour schedule for the first time in two decades. Diagnosed with lymphatic cancer in 1994, the newly idle Joey turned doctor’s appointments into days on the town with his mother, the two of them strolling the streets of his beloved East Village, arm in arm, sometimes singing the slap-happy hit parade tunes of Charlotte’s youth that intrigued him: “Hold tight, hold tight, Foo-dle-le yaki-saki want some seafood, Mama!” Cops would pull over and fire engines would pass with salutes of “Hey, Joey!”

Other days, he would work on the solo album he’d been putting off since 1980. The cast wasn’t unusual — replacement Ramone Marky on drums; Andy Shernoff, leader of the Dictators, on bass; and the virtuosic Leigh and longtime Ramones producer Daniel Rey on guitars — but the lyrics Joey’d been jotting on coupons and unopened mail in his 9th Street apartment were. Colored by his battle with cancer, Don’t Worry About Me (out this month on Sanctuary) would become a love letter to life, a musical biography, and true songwriting therapy to put James Taylor’s egotistical lullabies to shame.”

Musically inspired by the anthemic early-’70s pop-metal of Slade, “Stop Thinking About It,” the album’s second track, is packed with subtext (where Slade songs, like “Cum on Feel the Noize,” had none). Nothing lasts forever and nothing stays the same, Joey sings. When you finally make your mind up I’ll be buried in my grave. It’s a warning against materialism and a manifesto against obsessiveness. But not far beneath the surface is a defiant attempt at optimism in the face of illness from a songwriter with the pop genius for making the personal universal. As Shernoff says of the song’s author, “He’s an artist — he’s not gonna write, ‘I am sick, woe is me.’ “

If Dee Dee was the Ramones’ nihilist, Joey was the romantic, and “Maria Bartiromo” is his love song to CNBC’s business anchor/diva, who helped make therapeutic his Wall Street dabbling. I watch her at the big board every single day, goes the lyric. Those eyes make everything OK. Joey e-mailed the words to Bartiromo while he was working on the song. “I was flabbergasted,” says the anchor, herself a Brooklynite with the Ramones in her blood.

Just as “Maria Bartiromo” good-naturedly spills business culture’s false cache of sophistication to reveal the trash culture beneath, “Searching for Something” celebrates the simple wonder of spiritualism, stripped of mystical pomp. It’s about a meditation retreat he took upstate “for some spiritual comforting.” The glimmering pop-folk arrangement and cleverly bubblegummy exaltation of a guru — My-my-my-my-my baby, everybody wants you — scream out the Kinks, a band without whom there could have been no Joey Ramone.

And while it’s safe to say that Louis Armstrong was no major influence on the Ramones’ sound, the version of “What a Wonderful World” that opens Don’t Worry About Me says more about its singer than anything else on the album. In the context of terminal illness, its sweet observations absolutely radiate: I see babies cry, I watch them grow/They’ll learn much more than I’ll ever know.

For a while, against the odds, things were in fact looking bright. After his diagnosis, Joey had struggled through symptoms and side effects to stay upbeat, throwing rock ‘n’ roll bashes around town, eating out often and well, frolicking with Lesher, bonding with Leigh. In late 2000, a commitment to health food and exercise seemed to have reaped something of an upswing. But close to Christmas, a week after recording his final note in Rey’s home studio, he slipped on some ice and broke a hip. The accident landed him in New York Hospital and complicated his treatment.

“I think his system kind of broke down after that,” says Lesher, “and all sorts of other horrible things started to happen.”

Says Leigh, “Me and my mom, neither one of us could eat or sleep. We were thinking of him laying there and we were kinda withering away with him. I still feel the rawness of all that pain he was suffering.” They sat with him, spoke to him, and played music for him, until the heart of one of rock’s most pivotal bands since the 1960s stopped around 2 p.m., April 15, 2001, after nearly fifty years.

“Everybody has been influenced in the past twenty-five years by the Ramones,” says Shernoff. “You can’t not have been influenced — it’s like saying ‘I wasn’t influenced by the Beatles,’ you know? You’re lying. Or you’re ignorant.”

But Jeff Hyman left more than a musical legacy. Like all great artists, he had used a highly sophisticated filing system. “He remembered where everything was and his place was a mess,” says Lesher. Since his death, she and Leigh have braved a blizzard of audiotape, videos, and inscribed odds and ends. “Like a receipt from a pizza delivery we were about to throw away and you look at the back and there’s song lyrics written on it,” says Leigh, who is organizing the salvage into an upcoming book, Surviving Joey Ramone.

Among these obscurely placed records of her son’s spirit, according to Lesher, are fragments of “his story of himself when he was young, his experiences growing up.”

I was a loner and proud, reads one of the scraps. Rock and roll was my salvation.