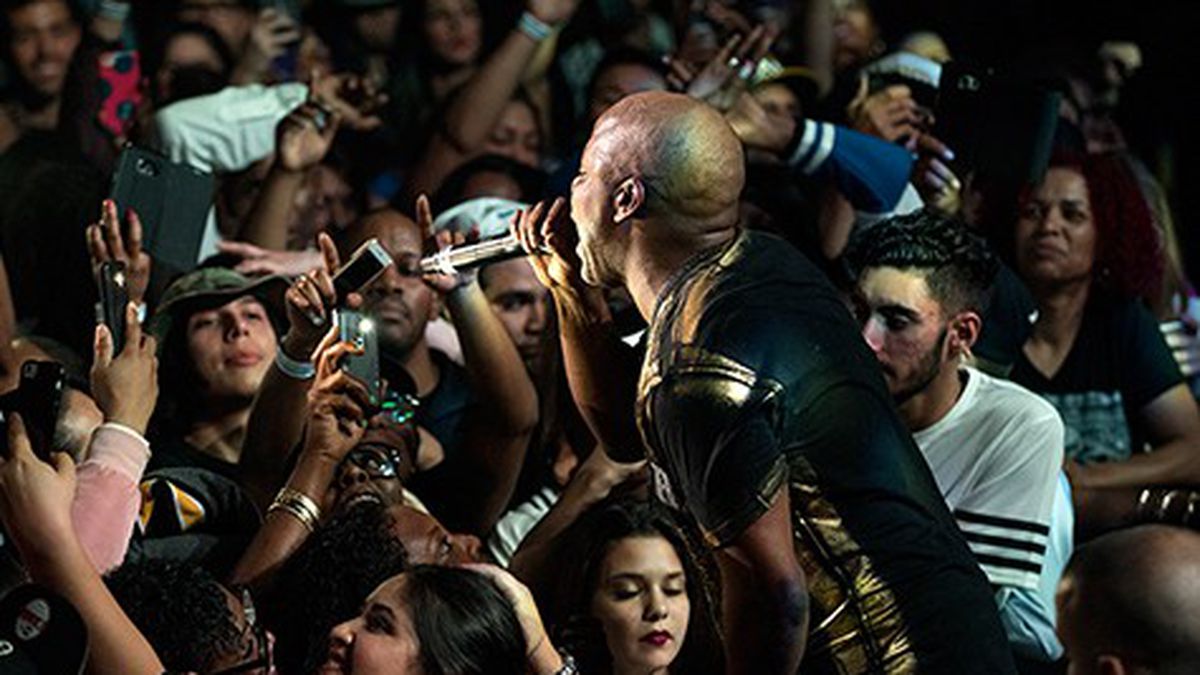 The East Oakland rap legend celebrated three decades of making music with an epic, star-studded performance at The Fox Theater.

Saturday night’s Too $hort show at The Fox Theater felt like the concert equivalent of a late-career museum retrospective — with as much ceremoniousness and fanfare as one might expect for an artist who has been canonized as an all-time great.

Everyone recognizes Too $hort as a rap legend — and a force in Oakland music, period. But at the concert, which was billed as his anniversary show celebrating thirty years in the industry, Too $hort confirmed his icon status with a hugely entertaining, dynamic set. In addition to flexing his skills on the mic, he punctuated his performance with bits of nostalgic storytelling, Oakland history, and surprise performances from fellow OGs E-40, Raphael Saadiq, Richie Rich, and Freddy B., in addition to younger artists such as Mistah F.A.B., and — in lieu of the late Eazy E — Lil Eazy E, the West Coast legend’s son.

Between songs, Short Dog’s many colleagues and longtime supporters gave impassioned speeches about his significance to rap history. Many people touted the hustle and imagination it took for him to transcend hip-hop trends and stay relevant in a genre that’s typically considered a young person’s game for over three decades.

After all, Too $hort was forty years old when he released “Blow the Whistle” in 2006. And though it’s now regarded as a quintessential hyphy classic, as the rapper pointed out in a recent video interview with the rap blog HipHopDX, he was already well-established in his career when it came out and didn’t need another hit. That’s the thing about Too $hort: Hits flow out of him. He’s unstoppable.

Inside the dimly lit Fox Theater, with its ornate, art deco interior, Too $hort took the stage looking like a rock star in a black shirt and ox blood leather pants — which he later traded for an all-black look decked out with shimmering, gold rhinestones. Instead of a DJ, he performed with a huge, nine-piece-or-so band (the number of musicians, backup singers, and friends on stage seemed to grow throughout the evening, so I wasn’t sure on the final count).

The crowd varied in age and ethnicity, though there was a large presence of Black folks in their forties and fifties. Copes, one of Too $hort’s old friends, was selling reprints of his original Oakland City Players T-shirts emblazoned with a Playboy Bunny over the Town skyline — a design that was popular locally in the Eighties and Nineties. He coined Oakland’s famous nickname, Oaktown, in the Eighties, and he had a binder full of old articles and photos to prove it. The night felt like a celebration of Oakland culture and history that, refreshingly, didn’t promote gentrification.

Though a lot of folks love hyphy-era Too $hort, his set list made it clear that the earlier, funkier parts of his catalogue are what he holds dear. While, sometimes, rap shows with live ensembles can often come off as overwrought, the musicians jived well with Too $hort’s music, and their playing never overshadowed his verbal dexterity. In fact, the band added a new sense of dynamism to Too $hort’s mob music classics.

During “Freaky Tales” — a track from 1989’s Born to Mack in which Too $hort recounts various sexual exploits over a hypnotic bass line for over nine minutes — his band launched into a Phish-style jam session. Too $hort made it a point to highlight that he cares about musicianship throughout the night. At one point, he invited Kev Choice, his pianist who is also a well-known Oakland rapper in his own right, to launch into a lengthy keyboard solo. The crowd gleefully cheered on his ostentatious, jazzy playing.

There were plenty of surprises throughout the night, as a throng of local legends took turns joining Too $hort on stage. E-40 — probably Too $hort’s only living equal in terms of gatekeeper status in the Bay Area rap scene — gave a heartfelt speech about his and $hort’s long friendship and creative partnership. The two of them performed the player anthem “Bitch” off Forty Water’s Revenue Retrievin’, and the elated crowd screamed along to every instance of “biatch” — Too $hort’s favorite word, as he famously explains in “Blow the Whistle.”

Though Freddy B. was one of Too $hort’s lesser-known guests, his appearance was by far one of the most special. He and Too $hort regaled the audience with tales from their days selling tapes together in the Eighties in East Oakland. Freddy B. recalled how people would commission him and $hort to dedicate personalized freestyles to them called “special requests,” which the duo would do for fifty to a hundred dollars a pop. “We were getting paper,” said Freddy B. His understatement provoked uproarious laughter. “In fact, we’re still getting paper.”

Raphael Saadiq joined Too $hort on stage for a large portion of the night, which was also a rare treat. Though he was the original lead vocalist of Toni! Tony! Toné!, the group reunited without him in 1998 following a hiatus during the early Nineties. Saadiq has enjoyed a successful solo career and done notable behind-the-scenes work with D’Angelo and The Roots, but his work with Toni! Tony! Toné! is one of his biggest contributions to Oakland music history and R&B in general. He regaled the crowd with his impressive vocal chops and, at one point, even brought out his bass.

Mistah F.A.B., who is famous for his incredible ability to freestyle for indefinite lengths of time (Fabby Davis is the prince of the O / The freestyle king, man, everybody know, as he rightfully declared in “N.E.W. Oakland”), also joined Too $hort for an extensive portion of the evening. F.A.B. freestyled at length about the history of the hyphy movement and Too $hort’s cultural importance, upping the concert’s sentimental factor even more as a slideshow of Too $hort’s album covers played in the background.

The show’s plush setting and flashy presentation was befitting of Too $hort’s extensive accomplishments as an artist. But it also spoke to how much mainstream America has embraced hip-hop. Too $hort’s sleazy stage banter and raunchy rhymes contrasted with The Fox Theater’s museum-like environment, and I felt a sense of satisfaction from witnessing him flagrantly subvert the Eurocentric concept of “low” and “high” art forms.

Too $hort came up during the Reagan era, at the height of the AIDS and crack epidemics — a time when mainstream media vilified rappers for creating art that reflected the struggles Black communities were facing. Hearing Too $hort perform his timeless piece of storytelling rap, “The Ghetto” — with Raphael Saadiq crooning its soulful hook — was a poignant reminder that, inherently, hip-hop is an affront to white supremacy and the police state.

While Too $hort is well known for his pimp persona, his sexually explicit lyrics often overshadow the strong contingent of socially and politically conscious content in his music. And while much of his oeuvre is admittedly pretty sexist, Too $hort had something of a feminist awakening in 2012 following an in-depth Ebony interview with the scholar Dream Hampton, in which they had a frank conversation about the dual burdens of racism and misogyny that Black women face.

While it would be an overstatement to say that Too $hort has wholly reformed the misogynistic tendencies in his work, it was commendable that at one point in the night, he announced that there were too many male voices on stage. He later brought out a female MC to finish the last verse on “Don’t Fight the Feelin'” from his first studio album, Life Is … Too $hort (Sadly, I didn’t catch her name, but she was raw).

The evening ended with an unexpected speech from Peggy Moore, Mayor Schaaf’s Senior Special Adviser. She honored Too $hort with a letter of recognition for his contributions to the performing arts in Alameda County. Seeing Too $hort get an official designation from the local government was as much a testament to his artistic accomplishments as it was a reminder that Oakland is an exceptional place thanks to people like him — not because of its recent influx of yuppies.

After Moore left the stage, Too $hort brought back E-40, Saadiq, Richie Rich, Mistah F.A.B., Freddy B., and the rest of the guests from throughout the night. He gestured to his band as if he wanted to do an encore, but the house lights had already been turned on and venue staff were beginning to usher people out of the theater. As with all magical evenings, the show didn’t feel nearly long enough. But Too $hort already knew that in 1988 when he pointed out that Life Is … Too $hort.