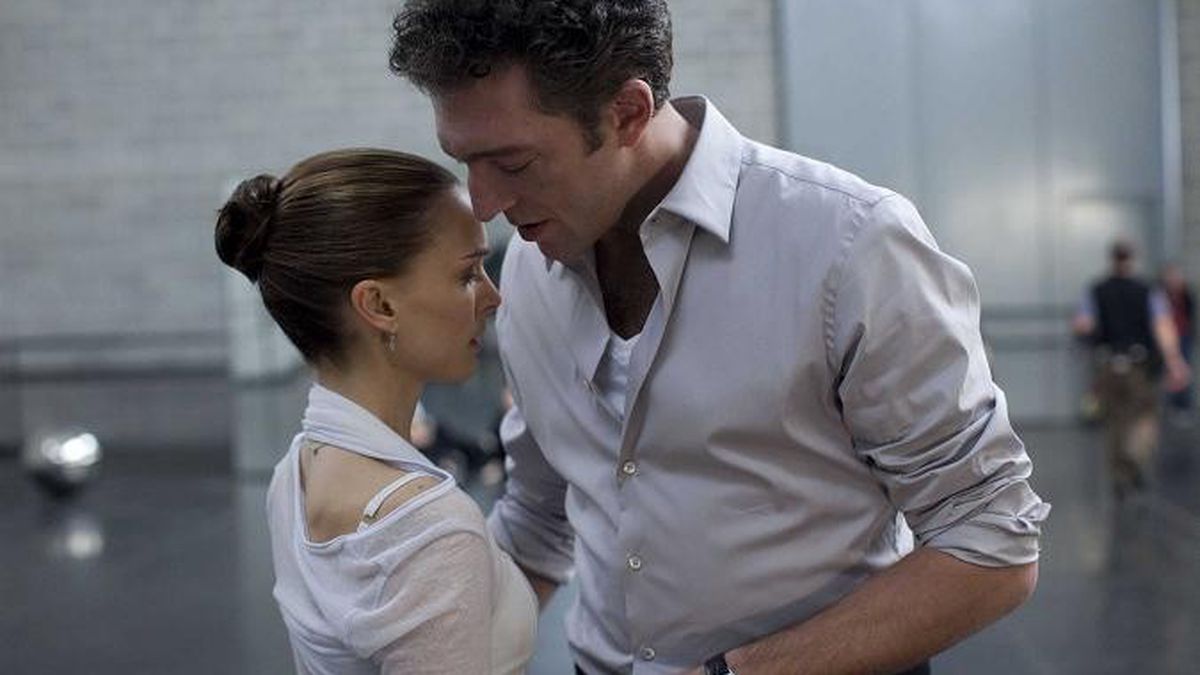 Toe to Toe: Black Swan and I Love You Phillip Morris

Black Swan is such a triumph that it presents a problem, the sort any reviewer loves to have: How do we begin to describe its winning combination of writing, acting, and directing?

The logical place to look for the secret key to unlock director Darren Aronofsky‘s box of chimerical splendors is probably Aronofsky himself. From The Wrestler to Black Swan is not the huge leap it might appear to be. If once upon a time we caught ourselves wondering how the creator of Pi, Requiem for a Dream, and The Fountain could then follow the prosaic yearnings of a washed-up wrestler with the story of an obsessed ballerina, Natalie Portman‘s performance puts all that doubt to rest in the first fifteen minutes. Portman is a revelation as haunted dancer Nina Sayers, and she’s Aronofksy’s private dancer first and foremost.

The backstage milieu of world-class ballet is evidently just as brutal and cutthroat as The Wrestler‘s National Guard armory locker rooms. As a rising star in a major New York ballet company, Nina has to not only punish her body for her art, but also defend herself against rival dancers jealous of her success — chief among whom is the voluptuous Lily (Mila Kunis) — and satisfy the increasingly bizarre demands of the company’s director and male lead dancer, Thomas Leroy (Vincent Cassel, a long way from the Mesrine films).

Nina is up for the prize role of the Swan Queen in the company’s upcoming revival of Tchaikovsky’s Swan Lake, and the pressure is literally driving her crazy. As if she weren’t nervous enough about her status, the unscrupulous Thomas employs time-tested showbiz slave-driver techniques to goad his prima ballerina to new heights, alternately encouraging her, promoting and demoting her capriciously, and manipulating her sexually. Meanwhile, pale, skeletal, terminally insecure Nina is taking her career a little too seriously. Dancing is the only thing in her life as she skitters back and forth from the workplace to the gruesome apartment she shares with her mother, former ballerina Erica (Barbara Hershey), just as highly strung as her daughter and with strange taste in hobbies. Surely Nina is heading for a nervous breakdown, or worse.

With the skill of a master, Aronofsky lets Nina simmer in her own juices. Odd things begin to happen. Nina thinks she sees her doppelganger on the street. There’s this curious rash/laceration/stigmata on her back. When the bitchy Lily takes Nina out for an evening of drinks, drugs, and sex with a couple of guys, Nina experiences nothing but terror. And Thomas, in the guise of helping Nina discover the dark side of her nature in order to enact the role of the Black Swan, assigns her some homework: “Touch yourself.” This movie is playing with fire. There’s a definite whiff of David Cronenberg in Nina’s shadowy predicament, also Roman Polanski and Brian De Palma. And of course Michael Powell. But the wily Aronofsky avoids imitating The Red Shoes or any other ballet film. Its field is the queasy-making netherworld of psychodrama, light on the pulp but thick on the emotional turmoil playing itself out on Nina’s face. Everyone and everything in her life is menacing to her.

The screenplay by Mark Heyman, Andres Heinz, and John J. McLaughlin, adapted from story by Heinz, makes a point of skating dangerously close to hysteria without going over the edge. It’s not a horror movie nor a lurid exposé nor an airless display of bitchiness, even though it contains touches of all those styles. We recognize Nina’s hallucinations for what they are, but that’s no help in predicting which direction her mind will turn.

Ms. Portman has never been put through her paces with such intensity, not even as a precocious twelve-year-old in Luc Besson‘s The Professional. She’s frighteningly good as Nina, responding to a demanding screenplay that’s several steps above most of the films in which she’s worked. Cassel, Kunis, Hershey, and Winona Ryder, in a small but pungent turn as a fallen idol, handle what are essentially archetypal roles with grace and intelligence, trimmed always with sadism. There are essentially no other speaking parts in the film, just spaces populated by faces.

Frederick Wiseman’s documentary La Danse: Le ballet de l’Opera de Paris played Bay Area theaters briefly this year, “briefly” because the market for movies about ballet, or any other type of high art, is paper-thin. Aronofsky and his cast and crew are to be commended for rushing in where other filmmakers might fear to tread, but Black Swan‘s risk-taking extends beyond the choice of the ballet demimonde — after all, Nina might just as well have been a novelist pressured to come up with a bestseller. Where this daring, exciting, confident film really succeeds is in its fearless excursion into the soul of an artist. We wouldn’t want to live there, but it’s a scary, exhilarating place to visit.

Black Swan isn’t the only unlikely, hard-to-sell entertainment in theaters this week. How’s this for a premise — a gay romantic comedy starring Jim Carrey and Ewan McGregor as two men who fall in love in prison and get into further trouble from there. That’s the setup of Glen Ficarra and John Requa‘s I Love You Phillip Morris, a movie that manages to cram the police mentality, penitentiary life, matter-of-fact homosexuality, Texas, Enron, diabetes, AIDS, and Johnny Mathis‘ “Chances Are” into the same crowded frame, for laughs.

Carrey brings his “A” game to the role of real-life con man Steven Russell, a slippery ex-cop no jail can hold. Carrey has matured away from his most vertiginous physical gags, but not so far that we don’t recognize him as a master of cornball, countrified humor (someone should offer him the title role in The George Jones Story).

Steven and fellow Southern boy Phillip Morris (McGregor) make the Texas correctional system look like a swingin’ country club. Writer-directors Requa and Ficarra (Bad Santa), adapting the true-crime book by former newspaper reporter Steve McVicker, let us in on the joke almost — but not quite — from the git-go. The humor is one-dimensional, but Carrey and McGregor paint every millimeter of that dimension purple. It’s not exactly the slapstick laff riot of the year, but it’s pointed in the right direction.